The woman who lost her job after famously flipping off President Trump’s motorcade has won a seat on a county board of supervisors in Virginia.

Juli Briskman, a former government contractor, went viral in 2017 when she was photographed giving Trump’s motorcade the middle finger while cycling by him in Virginia. Though the photo of Briskman flipping off Trump’s motorcade brought her internet fame, it also got her fired from her job at holding company Akima LLC, which claimed she had violated their social media policy. (She later sued the company and won a severance claim, The Washington Post reports.)

During a history-making election night which saw Democrats gained control of the Virginia state legislature, Briskman was voted on to a seat on the Loudoun County Board of Supervisors, representing the county’s Algonkian district.

Loudoun County is home to the president’s Trump National Golf Club and, when announcing her campaign, Briskman told the Post that she had joined activists protesting outside the club whenever Trump was in attendance.

Briskman, who ran as a Democrat, defeated eight-year incumbent Suzanne Volpe for the seat with about 52% of the vote, according to the Associated Press. In a tweet, she wrote she was “looking forward to representing my friends and neighbors.” 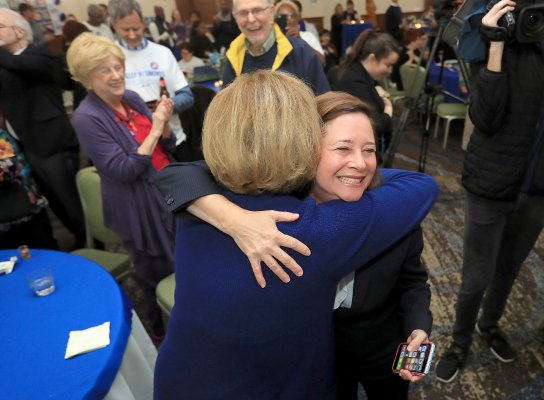