After WWI, Women Began to Make Their Way to Europe's Graves. What They Found Is Worth Remembering

A mother of a soldier at the grave of her son. France, circa 1920
Imagno/Getty Images
By Caroline Scott

As the bands and cheers of the Armistice celebrations faded away, Mrs. McDonald, from Dundee, Scotland, was thinking about the final resting place of her son, Michael. A soldier with the Black Watch during World War I, he had died in 1915, and was buried near Lens in France. Well-meaning friends told Mrs. McDonald that she shouldn’t upset herself by wanting to see Michael’s grave, but now that the war was over, she felt a pull toward that place. “I could never be content until I had seen for myself the spot where my son lies,” she told the Dundee Courier in 1924.

Thousands of mothers, wives and sisters would understand Mrs. McDonald’s feelings. For as long as the First World War had continued, it had been impossible, in most cases, for the families of servicemen who’d died overseas to visit their graves. Unable to attend a funeral, or tend a gravesite, many felt an agonizing lack of closure.

In July 1919 — roughly half a year after the Armistice of Nov. 11, 1918 — travel restrictions were lifted and civilians were permitted to enter the former conflict zones. Although much work had been done to clear away the hardware of war, to bury the dead, and to fill the trenches and shell holes, those first travelers were still shocked by the apocalyptic landscape they encountered. Angela Farmer arrived in the département of the Somme, where her husband, Jack, had died in 1916. “I never expected this,” she admitted to her brother, who subsequently wrote an account of the journey. “I have tried to think of it, and of him in it, and of what hell looks like. But I never imagined such loneliness and dreadfulness and sadness.”

About 60,000 people made trips to the Western Front in 1919, and knew that dreadfulness and sadness. For those in mourning, often with only scant details of a death and burial, there was a pressing need for answers and resolution. Finally seeing a grave allowed the stalled cycle of mourning to move on. But for all too many women this would be impossible. In 2009, the Commonwealth War Graves Commission stated that 526,816 British and Commonwealth soldiers who were killed in the First World War had no known grave. That figure slowly ticks down with time, as farming and building work still regularly uncovers human remains on the former Western Front. Some of these casualties can be identified by artifacts recovered with the body and DNA testing, but this process will go on for decades more, possibly even centuries, and in all likelihood it will never be completed. More than a century on from the Armistice, this sad legacy of the First World War still stretches ahead.

Angela Farmer’s husband would prove to be one of these missing casualties. She’d been told that he was buried somewhere around the village of Longueval, but finding a grave was another matter. Angela had brought Jack’s last letter with her, written just hours before he was killed, and she and her brother, Wilfred, now looked for clues. “A dugout had fallen in. A spade lay. A rusted rifle was half buried in a shell hole: a steel helmet in a pool of water. Of a grave there was no sign nor any cross near,” Wilfred wrote. They searched all over the area, but in vain. In the end, Angela left the wreath she’d brought for Jack’s grave against a tree.

Many women came with wreaths, while others brought plants from their own gardens. In 1921, a group of widows from Aberdeen, Scotland, brought heather to place on their husbands’ graves, but a grieving mother among the party also carried a hot-water bottle. She used to put in her son’s bed at home, she said, and her intention now was to bury it in his grave, the Aberdeen Press and Journal reported that September. Tokens were left, but also taken; women pressed poppies between the pages of books, picked moss and mold off graves, and came home with pebbles, fragments of barbed wire and flower seeds. One elderly woman, the East Kent Gazette reported, wrapped her muddy boots in paper after visiting the cemetery where her son was buried. She made the return journey to England in her slippers, explaining to the Salvation Army workers who wished to assist her that she regarded the mud as “too sacred to be removed.”

In 1921, Mrs. Richard Weld, from Boston, visited the American military cemetery at Romagne-sous-Montfaucon, and placed mimosa on the grave of her brother-in-law. Mrs. Weld was making the trip together with Marian Bartol, from Philadelphia. Both women had come to Europe to work for the American Committee for Devastated France, which was assisting communities shattered by the war. The visit to the cemetery left them reflective and saddened. In a letter to her family, Bartol wrote: “It was one of the most interesting and depressing trips I have ever taken, and while I would not have missed seeing the battlefields, I do not want to go again.” She concluded: “I realized as never before the awfulness of war.”

In 1924, nine years on from his death, Mrs. McDonald from Dundee at last had the means to make a trip to her son’s grave. The journey was the longest she’d ever undertaken, but she finally felt a sense of closure and even thankfulness. “All the horror of war had passed away from those sacred lots of ground,” she said. “Everything was peaceful and quiet, and very, very sad.”

The generations pass, and the voices of the last veterans are all now silenced, but one hundred years on from those first difficult journeys, women are still returning to pay their respects to the dead and the missing of the First World War. Earlier this month, while traveling through France, I talked with Alice Bell, from Cambridge, England, who had been to visit the grave of her great-grandfather’s cousin, and also found a relative’s name inscribed on the Menin Gate, Ypres’ memorial to the missing. “It felt a privilege to know the stories behind their names,” Alice told me. “Whilst the memory of my relatives is illuminated, the sheer number of men with untold stories felt overwhelming — a reminder of the importance of remembrance.”

Caroline Scott is the author of the historical novel The Poppy Wife: A Novel of the Great War, available now. 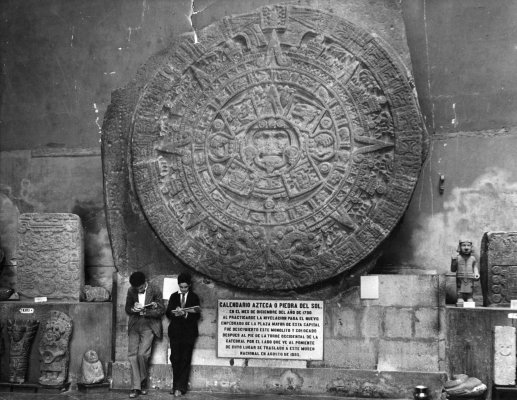 We Learned About the Aztecs From Their Conquerors—But New Research Is Letting Them Speak for Themselves
Next Up: Editor's Pick