A group of German immigrants on board the NEW AMSTERDAM ship, upon their arrival in New York in April 1939.
Keystone-France—Gamma-Keystone via Getty Images
By Richard Breitman

Congress had long ago established annual immigration quotas that discriminated against certain national origins, but White House officials considered even these quotas to be too generous. They brandished an obscure provision of immigration law that excluded visa applicants “likely to become public charges.” A new and stricter interpretation of the public charge provision could effectively reduce the quotas by as much as 90%. Advocates for immigration denounced the move as bad policy and as an overreach of executive authority, but most Americans seemed too preoccupied with their own problems to demand a change.

The president who announced this policy was not Donald Trump but Herbert Hoover, in 1930, after the start of the Great Depression. Hitler would come to power less than three years later. Raymond Geist, the U.S. consul in Berlin charged with applying immigration policy in Germany during much of the 1930s, saw firsthand the destruction the policy caused. The Nazis prohibited most German Jews from taking substantial assets out of the country, which meant they would be potential public charges unless they had close relatives in the U.S. with ample resources. As a result, American consuls rejected the applications of tens of thousands of people who could have made fine American citizens, thus trapping them in the escalating Nazi persecution.

In 1933, in the first term of Franklin Roosevelt’s presidency, his Administration considered changing the public charge clause to allow for the entry of more refugees from Germany. (At the time the United States did not distinguish between immigrants and refugees, nor was there any such thing as political asylum.) But immigration was a sensitive issue with the public and Congress—and Jewish immigration particularly so: some of Roosevelt’s critics called the New Deal the “Jew Deal.” There were State Department officials who thought American Jewish protests against Nazi persecution were exaggerated and artificial, part of a Jewish scheme to ease American barriers to increased immigration.

Responding to criticism from liberal forces inside and outside the administration, in July 1933 the State Department instructed consuls abroad that they should deny visas only to individuals who would probably become public charges. But it also signaled that they should still keep immigration down, and over the next year the total from Germany rose only slightly. More than 80% of the German quota remained unused.

But on the ground in Germany, as I learned while researching my book The Berlin Mission, American consul Raymond Geist tried at times to loosen these constraints. He made it known that American families could adopt German-Jewish children, thus ensuring that these families’ resources would keep such rescued children from becoming public burdens. Geist himself shepherded a program that by 1938 had brought approximately 350 German-Jewish children to the U.S. When the U.S. economy began to recover from the Depression, Geist suggested that visa applicants who were on an inactive waiting list should be notified that they could now formally apply for immigration visas. Though most of them would have been able to obtain jobs in America, the State Department rejected his suggestion. Geist also quietly worked with David Glick, an emissary of the Warburg family and the American Jewish Joint Distribution Committee, to increase German-Jewish emigration to the U.S. and other countries.

After FDR’s 1936 re-election landslide, officials in Washington did recalibrate immigration policy. After making it known that some consuls had been too strict in their use of the public charge, in January 1937 Geist’s former boss and patron George Messersmith, now promoted to assistant Secretary of State, wrote a new visa instruction to consuls in Europe, telling them they should not reject applicants based on the mere possibility that they might become public charges. The State Department now took a more generous view of German-Jewish applicants for visas, some of whom had affidavits of financial support from distant relatives or friends in the U.S. The result was a sudden increase in immigration from Germany, to about 50% of the quota. By the middle of 1938 the monthly quotas were filled.

But by that time, Nazi Germany had absorbed Austria and much of what had been Czechoslovakia, creating an enormous refugee crisis. The once substantial annual quota for German immigration of 27,370 (Germany plus Austria) now seemed paltry, given a waiting list of several hundred thousand visa applicants, the vast majority of whom were Jews. The public charge provision was no longer the main obstacle to their emigration; the quota limit was.

Congress and the American public were in no mood to breach the quotas. A November 1938 poll, taken immediately after Kristallnacht, showed that 71% of Americans opposed the entrance into their country of a larger number of German exiles, while only 21% supported it. A few months later, 66% of a sample opposed bringing 10,000 refugee children to the U.S. beyond what was permitted by the quota; only 26% supported it. (The U.S. Holocaust Memorial Museum today displays this polling data in its impressive “Americans and the Holocaust” exhibition.) Given these attitudes toward immigration, a bill that would allow 10,000 children from Germany into the U.S., outside the quota, for two successive years, went nowhere in Congress. Eleanor Roosevelt supported it, but in vain.

The nearly full use of the German-Austrian immigration quota lasted for roughly two years. In mid-1940, a new obstacle arose. After the rapid German conquest of France, pervasive concerns about American security fostered a fearful and resentful climate of opinion; Roper Poll in June 1940 found that only 2.7% of Americans thought the government was doing enough to counteract a Nazi “Fifth Column” operating in the U.S. German Jews were not immune from these suspicions. Some Americans thought Jews could be coerced into spying for Germany based on threats to their relatives in Germany; others, including a former undersecretary of state, thought that inherent “Jewish greed” might lead refugees and immigrants to work for the Nazi cause. By mid-1941 the State Department instructed consuls to deny visas to applicants who had relatives living in the totalitarian countries of Germany, the Soviet Union, and Italy—and then Congress passed a bill directing consuls abroad to refuse a visa to any alien who might endanger public safety. The quotas once again went unfilled.

Nazi Germany dealt unilaterally with its imagined worldwide Jewish conspiracy: through mass executions and deportations to ghettos and extermination camps. From October 1941 on, it formally blocked the legal emigration of Jews from its territories, and it called on allies and satellite countries to turn over their Jews. Most German Jews who made it through the difficult security screening in the U.S. came from neutral countries. Only in January 1944 did the Roosevelt administration, responding to some criticism and internal pressures, change course again, establishing a War Refugee Board to try to save the lives of civilian victims of Nazi persecution. The Board helped tens of thousands of Jews survive in Europe in the last 16 months of the war.

During this entire tragic period the basic immigration laws and the national origins quotas never changed. But the actual level of immigration fluctuated greatly. The belated recognition that the United States might have done more to save the lives of Jews and other victims of Nazi persecution before and during the Holocaust contributed to the passage of the National Refugee Act in 1980, giving refugees a special status within U.S. immigration limits.

Now, the Trump Administration seems to be reconsidering that idea—and showing once again just how much the executive branch can reduce immigration without having to go through Congress. The same vague language in the public charge clause that allowed Hoover to cut quotas by some 90%, and that allowed some State Department officials in Roosevelt’s first term to maintain that the German quota was unfilled because of the lack of “qualified” applicants, was set to be put to new use earlier this month. Federal judges on Oct. 11 blocked a planned Trump Administration expansion of the use of the public charge provision, but other rules in the same vein are still set to take effect.

Richard Breitman is the author of The Berlin Mission: The American Who Resisted Nazi Germany from Within, available now from PublicAffairs. 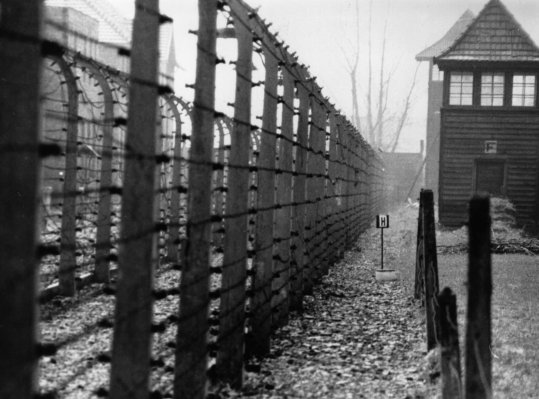 How Israel’s Justice System Dealt With Alleged Jewish Collaborators in Concentration Camps—And Why That Still Matters Today
Next Up: Editor's Pick