The Real World War II History Behind the Movie Midway

Just in time for Americans to officially remember veterans of World War II and other conflicts on Veterans Day 2019, a film about a key battle in the Pacific theater is opening in movie theaters.

Director Roland Emmerich’s new movie Midway, out Friday, is based on the true story of the battle of Midway Island. Fought June 4 through 7, 1942, the U.S. victory at Midway is considered by many the moment when the U.S. regained its military dignity six months after the Japanese bombed Pearl Harbor on Dec. 7, 1941.

This new movie has been cast by its creators as an attempt to restore cinematic dignity to the historic battle; another Hollywood film called Midway came out in 1976, but has been criticized for casting actors much older than those who fought the battle, putting events out of sequence and recycling footage from earlier movies about the war. So the filmmakers wanted to give this major turning point in World War II the major motion picture it deserved.

“The Pacific campaign is long and complicated, and gets overshadowed, in our attention, by what was happening in with the Nazis in Europe,” says screenwriter Wes Tooke. “But it’s an amazing comeback story. I hope that the movie relaunches an interest in learning about Midway.”

Here’s what to know about the importance of the real Battle of Midway in World War II.

Where Is Midway and Why Fight There?

The Midway Islands are an unincorporated U.S. territory about halfway between Asia and North America. The islands are part of the Hawaiian archipelago, located northwest of Honolulu, but not part of the state of Hawaii. The U.S. annexed Midway in 1867, and the Navy took it over in 1903, and in 1940, ramped up the construction of an air and submarine base there. (The 2019 movie was shot at Hawaii’s Hickam Air Force Base and in Montreal.)

After Pearl Harbor, the Japanese went about carving out a huge empire in the Pacific in Indochina, Burma, the Philippines and various island possessions. “It was an unstoppable parade of Japanese victories,” says Rob Citino, Senior Historian at the National WWII Museum, who was not involved in the film.

In early 1942, U.S. Navy cryptanalysts had learned the Japanese were planning a big attack in the Pacific at a place codenamed AF, but were trying to figure out where, exactly. As the National WWII museum puts it, “The attack location and time were confirmed when the American base at Midway sent out a false message that it was short of fresh water. Japan then sent a message that ‘AF’ was short of fresh water, confirming that the location for the attack was the base at Midway. Station Hypo (where the cryptanalysts were based in Hawaii) was able to also give the date (June 4 or 5) and the order of battle of the Imperial Japanese Navy.”

What Happened at the Battle of Midway?

Smoke from antiaircraft guns fills the sky as aircraft carrier USS Yorktown (rear, C) is hit by a Japanese torpedo during the Battle of Midway on June 6, 1942.
US Navy/The LIFE Picture Collection—Getty Images

Who Was Involved in the Battle of Midway?

The characters in the movie Midway are based on real people, and what they faced during the Battle of Midway sounds straight out of Hollywood. Screenwriter Wes Tooke combed oral histories, interviews, Santa Monica’s Museum of Flying and books like Barrett Tillman’s Enterprise: America’s Fightingest Ship and the Men Who Helped Win World War II and Stephen L. Moore’s Pacific Payback: The Carrier Aviators Who Avenged Pearl Harbor at the Battle of Midway.

Lieut. Commander Clarence Wade McClusky (played by Luke Evans) was awarded the Navy Cross for leading the Enterprise’s Air Group 6. “Bleeding from five wounds, his SBD dive bomber hit 55 times, McClusky landed back on the Enterprise with five gallons of gas left and reported three crack Japanese carriers (Akagi, Kaga and Soryu) bombed, ablaze and wrecked,” TIME’s 1976 obituary for McClusky said of what he went through during Midway.

Navy aviator Dick Best (played by Ed Skrein, with Mandy Moore playing his wife Ann) drew fans who said that if dive-bombing were an Olympic sport, the 32-year-old would have won a Gold medal, according to Tillman’s book, where Tooke first read about him. Tragically, his aviation career ended after Midway: He accidentally inhaled gas fumes while examining the inside of an oxygen canister and, after the battle, a doctor told him the gas fumes had activated latent tuberculosis. He retired from the Navy in 1944, ending his career flying planes.

Bruno Gaido (Nick Jonas) was an Air Machinist Mate in one of the planes that dive-bombed the Japanese carrier Kaga, but ran out of fuel and was advised to abandon the aircraft. The crew of a different Japanese carrier, Makigumo, picked him up. A postwar investigation found Japanese accounts that said he was interrogated and then thrown overboard with weights attached to his feet, drowning him.

In terms of naval commanders, two of the greats participated in Midway and they complemented each other perfectly. As Citino describes them, William “Bull” Halsey (played by Dennis Quaid) was “the spirit of the U.S. Navy,” known for “always charging ahead” and his aggressive war maneuvers, even if that meant sailing into a typhoon. However, he didn’t get to command during Midway because he had to receive medical attention for a skin condition. Chester Nimitz (Woody Harrelson) was one of the war’s top planners, known for his cerebral approach. Lieutenant Colonel Jimmy Doolittle (Aaron Eckhart) became famous for the bombing of Tokyo two months prior, now known as the Doolittle Raids. To make sure Japan wouldn’t be caught off guard like that again, the Imperial Japanese Navy kept expanding in the Pacific and thus zeroed in on Midway, leading to the great battle in June.

Rear Admiral Edwin Layton (Patrick Wilson) was a naval intelligence officer to Nimitz who played a key role in figuring out that the Japanese had their eye on Midway. After that battle, he received the Distinguished Service Medal because he “analyzed and precisely evaluated the capabilities and intentions of the enemy’s air, sea and ground forces” and provided “timely and accurate intelligence information, vital to the security of our fighting forces and essential to their successful operations, contributed inestimably to our victory over the enemy.” His story became more well-known after his memoir And I Was There came out in 1986, two years after his death.

What Was the Significance of the Battle of Midway?

“At one stroke, the dominant position of Japan in the Pacific was reversed,” British Prime Minister Winston Churchill wrote in his post-war account of World War II. “The annals of war at sea present no more intense, heart-shaking shock than these two battles, in which the qualities of the United States Navy and Air Force and of the American race shone forth in splendor.”

“The second six months of war last week began for the U.S. at the point where the first six months should have started,” TIME reported in the June 22, 1942, issue. “The loss of the Philippines, of Guam and Wake, had not been undone. But Midway was what Pearl Harbor should have been. The two canceled out. In three days of concentrated destruction off Midway, the U.S. had restored the balance of Pacific naval power. Thus for the U.S. began Phase II of the war.”

Critically, for Americans who feared a repeat of Pearl Harbor, Japan “lost much of her Navy’s striking power at sea,” the story noted. “Without that power, Japan cannot bring the war to the U.S., or even to the remaining U.S. strongholds in the Pacific.” Military leaders in Washington knew Midway was an “essentially defensive” victory and “a crippling, but not a knockout blow.” As a top Navy official in Washington D.C., put it, “I would not say that they [the Japanese] have been defeated yet; they have ‘withdrawn.'”

It would be three more “grinding” years of island-hopping invasions “from the fetid jungles of new Guinea to the barricaded caves of Okinawa,” before the war in the Pacific ended, TIME reported in a special issue on the 50th anniversary of Pearl Harbor. The Japanese surrendered to the Allies aboard the USS Missouri in Tokyo Bay, on Sep. 2, 1945, now known as “V-J Day.”

And yet, the filmmakers behind the new Midway felt the battle is not as well known as it should be to Americans in 2019.

Citino says there are several reasons why Midway is not as front of mind as Pearl Harbor or D-Day for Americans in 2019: “At the time it was fought, Midway was a sensation, got a lot of media attention and everyone knew this was the Americans’ first big win. Over time, naval battles are more difficult to write about and describe unless you have some naval background. I think America has lost touch with its naval battles in the Pacific… You can envision soldiers on land shooting at one another, but maybe naval battles are harder for people to envision because they happened at such vast distances over open ocean.”

And experts are still learning about the conflict nearly eight decades later. On Oct. 21, a research vessel operated by the late Microsoft co-founder Paul Allen’s Vulcan Inc. discovered two of the Japanese carriers that sunk during the battle of Midway. 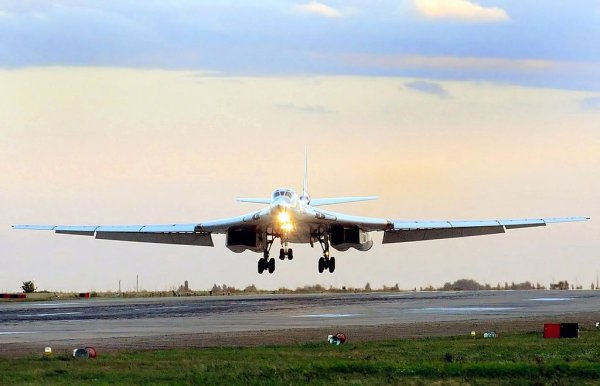 Russia Sends 2 Tu-160 Nuclear Bombers to South Africa in a Display of Defense Cooperation
Next Up: Editor's Pick