A Chinese orienteering team was disqualified for cheating this week during the 2019 Military World Games, which were hosted by China.

Orienteering is an endurance sport in which competitors navigate what is usually unfamiliar terrain using only a map and compass. While racing to the finish line, they must navigate to a series of check-points en route. In the women’s middle distance competition at the Games, Chinese orienteers had come close to sweeping the winners podium, with competitors in first, second, and fourth place. (A male Chinese orienteer placed second in the men’s race.) But an investigation into their conduct was kicked off after complaints from six other countries participating — Russia, Switzerland, France, Belgium, Poland and Austria.

After investigating the complaints, a jury decided to disqualify the competitors and void the results of their race from final tallies. In a statement, the International Orienteering Federation (IOF) decried that, “the middle fistance competition was unfortunately overshadowed by extensive cheating by the Chinese team.” Detailing the investigation, the statement explained that “it was soon discovered and proven that the runners had received illegal assistance both by spectators in the terrain, markings and small paths prepared for them and which only they were aware of.”

“I just don’t want to lose,” 20-year-old Li Meizhen, a member of China’s orienteering team, had said in a pre-competition profile on the Games’ website. “Orienteering is like life. You may feel fatigue and encounter obstacles. Yet you can always find surprises and joy,” she added.

The Chinese team was also disqualified from competing in the long distance race and a relay competition. The team appealed the jury’s decision with the International Military Sports Council (CISM), but their appeal was denied. Though the IOF’s statement noted that “the [revised] results are not yet official,” results currently listed on the Military World Games website do not list any Chinese participants as winning medals in the middle distance races (or in subsequent orienteering competitions).

Now the IOF, which governs the rules of the sport, is partnering with CISM to deliver sanctions to those involved. IOF will also be investigating Chinese teams participating in the Orienteering World Cup finals (a civilian event) that began Friday, also being hosted by China.

“The IOF takes the actions of the Chinese team very seriously and is pleased to see that the IOF rules regarding the fairness of competition were enforced by the jury and CISM and that the best solution was found for those athletes who compete within the regulations of the sport,” said IOF Secretary General Tom Hollowell in a public statement.

The Military World Games kicked off in China on Oct. 18 with a ceremony and declaration from Chinese President Xi Jinping.

The Games are “a multisports event organized every four years… based on the CISM and Olympic spirit, without political, religious and racial consideration nor discrimination,” the CISM’s website explains. “By organizing [the] Games, CISM has launched the most explicit and spectacular message of peace to the whole world… Those who had seemed to be forever divided by ideological and political barriers came together under the CISM flag in the name of friendship.”

Across the 2019 Games as a whole, as of Friday China is in first place on the medal table, with 193 medals total as of Friday evening. Russia and Brazil, with 136 and 74 medals respectively, are in 2nd and 3rd place. The Games conclude on Oct. 27. 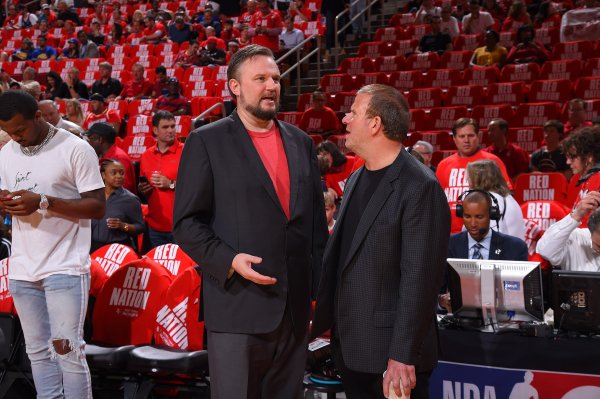 Why China Has the NBA in a Full-Court Press on Free Speech
Next Up: Editor's Pick