Russia Has Been Banned From the 2018 Winter Olympics. Here's What to Know

The International Olympic Committee (IOC) on Tuesday scrubbed Russia’s presence from the 2018 Winter Games in Pyeongchang, South Korea. The nation’s flag will not fly at the opening ceremony, its anthem will not sound at any podium, its medal tally will remain at zero. Even if its athletes compete, they will not do so under the Russian banner.

The ban follows a three-year IOC investigation that reaffirmed what has long been suspected: the Russian state has engaged in widespread doping of its athletes at major international sports competitions. At the 2014 Winter Olympics in the Black Sea resort of Sochi, this included a clandestine operation to tamper with more than 100 urine samples at a laboratory that handled testing for performance-enhancing drugs; it resulted in more than two dozen athletes being retroactively struck from their standings.

The Kremlin has denied orchestrating the widespread use of performance-enhancing drugs at Sochi. According to the New York Times, Russia’s Olympic Committee is likely to appeal the IOC’s ban. Nonetheless, Russia now joins a group of nations that have been excluded from the Olympics, which counts among its members Axis powers Germany and Japan in 1948, apartheid-era South Africa in 1964, and Kuwait in 2016.

What Does the Ban Mean for Athletes?

While the ban on Russian representation is comprehensive, the IOC has left some wiggle room for athletes that have a rigorous history of drug testing. Those who pass muster with an IOC panel may be permitted to compete in neutral uniforms.

In a rare concession, these neutrally attired competitors will be identified as “Olympic Athletes from Russia,” rather than “Independent Olympic Athletes” as was the case with Kuwaiti competitors in at the Rio Summer Games last year, the New York Times reports.

Still, any medals they win won’t be awarded to Russia. According to data compiled by the Times, Russian athletes would have been potential medalists in about a third of Pyeongchang’s 102 competitive events.

How Has Russia Reacted to the Ban?

Russian President Vladimir Putin has yet to address the ban, but shortly before it was announced his spokesman Dmitri S. Peskov said prior to the ban that the country was not considering a boycott of the Games, the Times reports.

Some officials, however, have suggested Russia would boycott the games if its athletes were forced to compete under the Olympic flag. Were such a boycott to go ahead, it would be the first Russia no-show since 1984 when, along with other communist nations, it skipped the Los Angeles Games in a tit-for-tat protest a the U.S. boycotting the Moscow Games in 1980.

Under international pressure, the president of Russia’s Olympic Committee — who was struck from the IOC Tuesday — has issued an apology for the widespread cheating.

What Are the Implications for Sports in Russia?

Putin sees international sports competitions as a means of boosting national pride, and spent $50 billion on hosting the 2014 Winter Games at Sochi, Bloomberg reports. Projects like Sochi and next year’s soccer World Cup, which reportedly comes with an $11 billion price tag, showcase the international clout of the country and its ability to ability handle mega-projects.

Now, the latter could be in jeopardy. The chairman of the World Cup’s organizing committee Vitaly Mutko, who is also Russia’s Deputy Prime Minister, was implicated in the Sochi doping scandal and banned for life from the Olympics by the IOC.

But in a statement Tuesday, soccer’s governing body FIFA said the IOC’s punishments would have “no impact” on the June 2018 tournament. 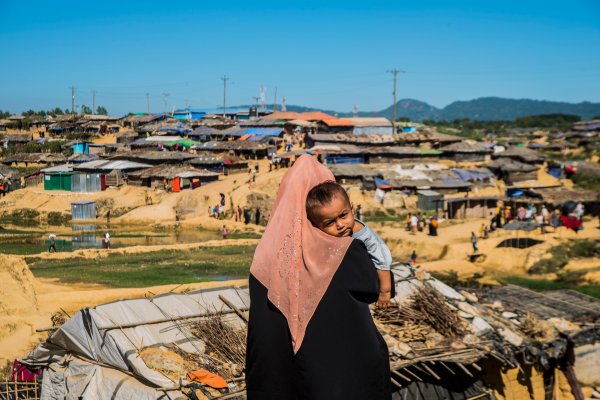 U.N.: No Ruling Out 'Elements of Genocide' in Myanmar
Next Up: Editor's Pick