As Argentina Goes to the Polls, Voters Are Falling Back in Love With a Divisive Political Movement

As Argentina heads into its presidential election Sunday amid economic crisis, voters are mulling a dramatic change of course for their country.

Four years ago, Argentina shocked the international community by turning its back on Peronism, the divisive political movement that had ruled the South American country of 44 million consistently since 2001, — most recently under former President Cristina Fernández de Kirchner. At the 2015 elections, voters shunned Kirchner’s protégé, who promised to continue her mix of protectionist economic policy and subsidized living costs. Instead, they elected Mauricio Macri, a slick millionaire businessman who promised reforms that would open Argentina up to international investment.

Two decades of economic dysfunction and state intervention made the country a pariah on global capital markets, and, Macri argued, severely limited the country’s growth. Economists around the world rejoiced about the measures he was taking.

But today, with the value of the peso plummeting, inflation soaring and several million Argentines falling into poverty in a single year, many inside the country say Macri’s experiment with economic liberalism has failed.

Kirchner, currently a senator, is back to capitalize on Argentina’s dissatisfaction, this time as a vice-presidential candidate to Alberto Fernández (no relation), a little-known former adviser from the moderate wing of her Peronist Justicialist party. The pair promise to reverse Macri’s economic overhaul and restore standards of living for a suffering working class. The president, meanwhile, is urging voters to give him a second term so his reforms can bear fruit. Here’s what to know about Argentina’s elections.

There are six candidates running for president in Argentina. But according to polls, only two have a chance at success.

President Mauricio Macri, the son of a real estate tycoon and former head of Boca Juniors football club, leads the centre-right Republican Proposal party (PRO by its Spanish initials), which is part of an electoral coalition called Commitment to Change.

Macri says the solution to the country’s current economic crisis is not a return to protectionism, but more jobs. He wants to create a million and a half of them in the private sector by stimulating tourism, agriculture and the creative industries, as well as cutting taxes for younger workers and regulating more of the informal sector — which accounts for roughly a third of jobs in Argentina. Macri has also pledged to crack down on the sale of drugs, touting his record so far in office, with an unprecedented 80,000 drug-related detentions nationwide.

Macri’s rival Alberto Fernández served as cabinet chief to his running mate’s husband, Néstor Kirchner (president from 2003 to 2007) and then in the early months of Cristina’s first term. Like the Kirchners, Fernández belongs to the Justicialist Party, the formal home of the ideologically complex Peronist movement. But he hails from the party’s moderate wing, while Kirchner is from the center-left. After leaving Kirchner’s administration, Fernández became a fierce critic of her more divisive political choices — which included extensive new taxes on the powerful agricultural sector (which in 2015 became one of Macri’s strongest support bases) and an attempt to increase political control over the judiciary.

On the campaign trail Fernández has emphasized his pragmatism and desire to build bridges with European powers, distinguishing himself from Kirchner’s often fiery nationalist populism.

By working with Fernández, Kirchner is trying to rally her base while also appealing to voters who dislike her — and the fact that she’s in the midst of a long series of trials for alleged corruption. (She denies any wrongdoing and claims the cases are politically motivated. As a sitting senator, she is immune from incarceration.)

The Fernández-Kirchner ticket, representing the Victory Front electoral coalition, promises to undo a highly controversial pension reform — pushed through by Macri in 2017 in a bid to reduce a budget deficit — and add an extra 20% to pension packets. Fernández also wants to expand public healthcare and housing programs.

Former President Juan Domingo Perón initiated the Peronist movement in the 1940’s. A populist, he built his support base among trade unions and the working class, advocating state intervention in the economy, strong labor rights and generous public welfare schemes for the poor. But his politics also incorporated elements like nationalism, and an authoritarian strain.

Several generations of politicians have moulded themselves on Perón. From the end of Argentina’s last military dictatorship in 1983 to Macri’s election in 2015, the country spent 24 out of 36 years with a president from the Peronist movement.

But just what Peronism stands for ideologically is extremely complicated. The movement today is sprawling and diverse, containing politicians on both the left and the right. During her two terms from 2008 to 2015, Kirchner pursued welfare programs and subsidies on services. But another nominally Peronist president, Carlos Menem, carried out large-scale privatizations of public assets and reduced budgetary spending during the 1990’s.

Many analysts say Peronists today are united by little more than their invocation of patriotism and Perón’s legacy.

How is Argentina’s economy factoring into the election?

The pitfalls of Macri’s reform program has proved a defining factor in this election.

In an effort to reduce public debt and make the country more appealing to foreign investors, the president has scrapped protectionist policies on industry, cut public spending and cancelled subsidies on gas, electricity and public transport.

He also floated the peso, which had been artificially over-valued during the Kirchner era, and removed currency controls that limited the amount of U.S. dollars and other foreign exchange businesses and individuals could buy. In 2016 analysts hailed Argentina’s “triumphant return” to capital markets and in 2017 it successfully floated $2.75 billion worth of long-term ‘century bonds,’ indicating high investor confidence in the state.

But in 2018, inflation began to spike and the peso’s value started to fall rapidly — it lost half of its value against the dollar in 2018 — making the cost of living untenable for many Argentines and driving companies out of business.

Last year Macri was forced to ask the international Monetary Fund (IMF) for a record bailout of $56 billion. That decision enraged many in Argentina, who blame mismanagement by the IMF for exacerbating the country’s catastrophic economic collapse of 2001. Under the terms of the loan, Argentina will have to implement austerity measures, affecting an already struggling working class.

Economic hardship under Macri has made it easy for Kirchner and Fernández to promise a return to the good days under Peronism. They did far better than predicted at a king of primary election in August, winning a 15 point lead over Macri.

The pair’s success, indicating a possible return to protectionist Peronist economics in Argentina, has spooked financial markets, accelerating the peso’s fall. In September, as Argentines rushed to convert their savings into foreign currency, Macri was forced to reinstate the Kirchner-era currency controls.

Fernández’s ticket has maintained a strong lead over Macri since August and some polls suggest he will win up to 54% of the vote. To win an Argentine election in the first round, a candidate needs to win 45%, or at least 40% with a 10 point lead over their nearest rival. If no candidate reaches that mark, a second-round run off will pit the two top candidates against each other on November 24.

Macri is currently polling at around 33%. If he does defy the odds and make it to a second round, some pollsters say he would have a chance to turn things around. 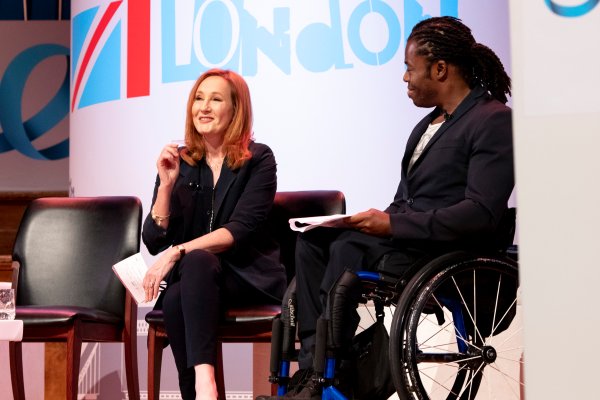 J.K. Rowling: Don't Give Your Time or Money to Orphanages
Next Up: Editor's Pick