No leader wants to face voters when times are tough, particularly in this era of wild-card winners, incumbent losers and brand-new political parties in country after country. That’s why Argentina’s President Mauricio Macri is still widely considered an underdog to win re-election in October.

Last year he told Argentina’s people that after years of economic crisis and isolation, “the worst is over.” That might be true. Their currency has stabilized, inflation is finally slowing, and the cost of borrowing is down. On the other hand, the improvement is marginal. The economy remains in recession, the unemployment rate is still 10%, and price inflation is above 50%. To meet the demands of the International Monetary Fund–a lender that many Argentines love to hate for the austerity it demanded in return for its cash through years of economic hardship–Macri’s government has cut spending.

The opponent he’s likely to face in a second-round runoff doesn’t carry much political baggage. Alberto Fernández presents himself as a moderate of the center-left, a man who pledges to win a better deal from the IMF without destroying the country’s hard-won financial credibility. But his running mate is another matter. Fernandez’s choice for Vice President is former President Cristina Fernández de Kirchner (no relation), the biggest lightning rod in the country and now Macri’s best chance to beat Fernandez.

Cristina, as she’s known to her supporters, governed Argentina from 2007 to 2015. During those eight years, she nearly ran the country into the ground, in part by playing to voter frustration by declaring war on a group of foreign lenders. Her government manipulated economic statistics. Graft in politics and business was widespread. Cristina faces several ongoing corruption cases. If Alberto Fernández chose her as his election partner, it is because of her loyal following among Peronist voters.

Macri, the man elected four years ago to right a listing economic ship, can hope the economy continues to improve quickly enough to blunt public demand for change. But he knows it takes time for voters to feel even a strong recovery–and time is slipping away. He has tried to co-opt his opponents’ populism by choosing a moderate Peronist as his running mate. He has focused his campaign at times on noneconomic accomplishments, like better roads and cleaner water on his watch.

But in the end, his message will sound something like this: “You are not yet better off than when you first elected me President, but you are far better off than when Cristina Fernández de Kirchner was your President.” He can argue that outside forces beyond his control, like lower prices for Argentina’s exports and expectations for higher interest rates in the U.S., have made things tougher. He can claim that Cristina is to blame for the depth of the hole Argentina is still digging itself out of, and her presence on the opposition ticket will help him make her past rule a warning for the future.

That’s still a tough sell for the incumbent Macri, particularly in an era when voters in the U.S., Mexico, Brazil, France and Italy have shoved aside establishment politicians. We’ll get an early indication of Argentina’s political temperature on Aug. 11, when voters turn out, or fail to, for party primaries. That will provide a good gauge of whether the dominant mood is demand for change or fear that the future might mean a return to an ugly past. 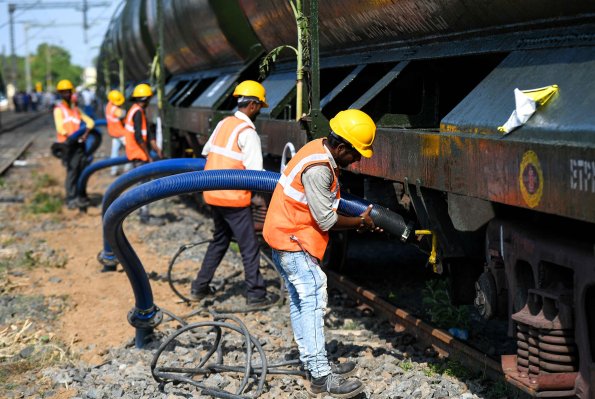 India Grapples With a Water Shortage as City Residents Reach Their Limits
Next Up: Editor's Pick