O’Neal, a 19-year veteran of the NBA, is now an analyst for TNT. He spoke in support of Morey during a pregame show ahead of the NBA’s Opening Night on Tuesday.

“One of our best values here in America is free speech. We’re allowed to say what we want to say and we are allowed to speak up about injustices and that’s just how it goes,” O’Neal said. “Daryl Morey was right. Whenever you see something wrong going on anywhere in the world, you should have the right to say, ‘That’s not right’ and that’s what he did.”

While Morey’s tweet, which included an image that said “Fight for Freedom. Stand with Hong Kong,” was quickly deleted, the Chinese government interpreted it as a challenge to its sovereignty over Hong Kong. The controversy has put the NBA’s business in China at risk, with Chinese stations halting broadcasts of pre-season NBA games and many Chinese companies cutting ties with the Houston Rockets.

O’Neal is not the only basketball icon to weigh in on the NBA-China rift. LeBron James stirred a controversy of his own when he criticized Morey for speaking out, saying the Rockets general manager was “misinformed or not really educated on the situation.”

NBA commissioner Adam Silver also spoke in support of Morey during the TIME 100 Health Summit on Oct. 17, and said the league is willing to handle the business consequences of his tweet.

“The losses have already been substantial. Our games are not back on the air in China as we speak, and we’ll see what happens next,” he said. “The financial consequences have been and may continue to be fairly dramatic.”

Although the NBA had initially distanced itself from the issue, Silver defended Morey while speaking at the event during an interview with Robin Roberts. “We made clear that we were being asked to fire him, by the Chinese government, by the parties we dealt with, government and business,” he said. “We said there’s no chance that’s happening. There’s no chance we’ll even discipline him.”

Anti-government protesters in Hong Kong have taken to the streets for months, first with demonstrations against now-withdrawn extradition legislation. In the months since, protesters’ grievances have grown in scope and scale, with some calling for independence for Hong Kong. 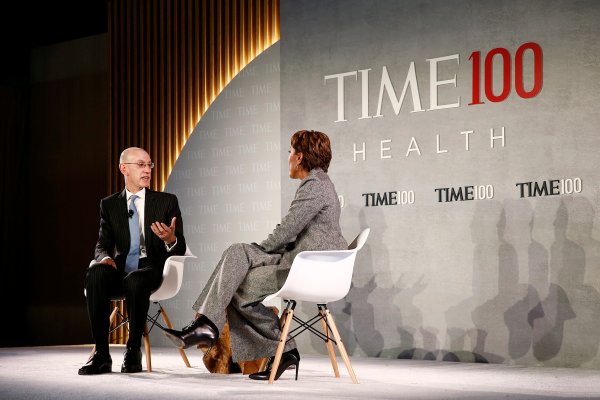 Silver Addresses Fallout From the NBA-China Controversy
Next Up: Editor's Pick