A boy stands between tents at a camp for internally displaced persons (IDP) of Iraq's Yazidi minority in the Sharya area, some 15 kilometres from the northern city of Dohuk in the autonomous Iraqi Kurdistan region on August 30, 2019.
Zaid Al-Obeidi—AFP/Getty Images
By Joseph Hincks

The year was 2014. Dinnayi had volunteered to guide an Iraqi Arab pilot delivering supplies to stranded Yezidis, a mostly Kurdish-speaking religious minority, encircled by ISIS fighters and trapped without food or water on a mountain plateau. As the helicopter landed, desperate refugees swarmed its doors and the aircraft lurched upwards with at least 34 people on board, well above its maximum load. When it crashed after takeoff, killing the pilot, Dinnayi broke a leg and two ribs, and struggled to breathe beneath the crush.

“I asked my God, is ISIS correct in their faith and is ours false? Is that why we are dying and they are winning the war?” Dinnayi told TIME from Yerevan, Armenia on Saturday, hours before accepting this year’s Aurora Prize for Awakening Humanity. As his life flashed before him, he prayed only that he would not die that day. “I saw a light in front of my eyes and I took some fresh air, and then I had hope again. I heard the voices of people screaming my name and they picked me out.”

The ISIS assault on Sinjar only strengthened Dinnayi’s resolve to help fellow Yezidis, a people the jihadist group regards as heretical “devil worshipers” and targeted for genocide. Since March 2015 he has helped some some 1,100 Yezidis secure asylum in Germany, where he has lived since 1994. He also helped persuade conservative Yezidi elders to re-admit to the community women enslaved by ISIS.

Now, these barely healed wounds are being reopened. Five years after the ISIS slaughter of Yezidis pushed the U.S. to enter Syria, President Trump’s tacit green-lighting of a Turkish military offensive there has upended the dynamics of the complex war and again left the long-persecuted minority feeling vulnerable. “They fear another genocide,” says German psychologist Jan Ilhan Kizilhan, who formerly worked in Iraq and has helped resettle Yezidis both there and in Germany. In Iraqi refugee camps, he adds, traumatized women and children “report increased fears, sleep disturbances and nightmares. They remember their hostage-taking, torture and rape.”

Although the offensive is now effectively over after Turkey’s President Erdogan met with Russia’s Vladimir Putin on Oct.22, the UN says the fighting in northeast Syria has displaced more than 170,000 people, including some residents of Yezidi villages. The ethno-religious minority of about 550,000, mostly residing in Iraq but with a substantial number in northern Syria, is now confronting the terrifying prospect that their ISIS tormentors could regroup.

Since the operation began, there have been regular reports of prison breaks at facilities that hold ISIS affiliates in northeast Syria. As recently as Oct 20, the formerly U.S.-allied Syrian Democratic Forces (SDF) reported that its internal security agency had thwarted another escape attempt by a group of ISIS mercenaries at the Al Hol Prison camp, which holds some 70,000 prisoners, including thousands of ISIS family members.

There is little clarity about who is taking responsibility for the captured ISIS fighters and sympathizers. As Turkey readied its military operation, Trump announced that its forces would now be responsible for all ISIS fighters captured in the past two years. But the U.S.’ former envoy to the global coalition to defeat ISIS, Brett McGurk, says Turkey has neither the desire nor the capability to shoulder the burden. Turkey’s former foreign minister told TIME recently that taking responsibility for ISIS would be a “nightmare” for Ankara.

Turkey’s government has called claims it is undermining the fight against ISIS “malicious and baseless” and accuses the SDF of setting free ISIS terrorists “to fuel chaos in northern Syria,” an allegation Trump has echoed, without offering evidence. On Oct 14, two U.S. officials told Foreign Policy that armed factions loyal to Turkey had deliberately released ISIS sympathizers.

The self-declared caliphate was already in the process of rebuilding itself. Despite Trump’s claims ISIS is “100% defeated” a Pentagon report released in August said the group has “solidified its insurgent capabilities in Iraq and was resurging in Syria” and that it has as many as 18,000 militants divided between the two countries. Kurdish Peshmerga fighters in Iraq told Israel’s Haaretz newspaper recently that the Iraq-Syria border is now a “front line” in the fight against ISIS. International Crisis Group says the SDF contends with daily hit and run attacks from the jihadist group.

The Yezidis were subjected to some of ISIS’s worst abuses. Since 2014, some 10,000 Yezidis living in the Sinjar region of Iraq—mainly men and boys over 12—have been murdered. Seventy mass graves have been subsequently erected. Additionally, 7,000 Yezidi women and children were abducted, sold as slaves, and raped, according to Germany’s DW.

They have Kurdish forces to thank for preventing an even worse genocide. Although U.S. airstrikes played a key role in halting the ISIS advance on Mount Sinjar, it was militants from the Kurdistan Workers Party (PKK) and their Syrian affiliates the YPG on the ground that broke ISIS lines and created a humanitarian corridor that allowed the trapped Yezidis to escape into Syria.

Some Yezidis, along with thousands of Arabs and hundreds of western volunteers, joined the Kurdish-dominated SDF, which lost around 11,000 fighters routing ISIS from its Syrian strongholds. Turkey regards the SDF’s dominant militia, the YPG, as indistinguishable from the PKK, with which it has fought a decades-long insurgency and which the U.S., Turkey, and the European Union have labelled a terrorist group.

Turkey’s President Erdogan says that his objective is to sweep the YPG from Turkey’s southern border, but he has also announced plans to repatriate up to 2 million predominantly Arab refugees in the formerly Kurdish dominated area.

It is not only the prospect of imprisoned ISIS fighters escaping that worries Yezidi activist Dinnayi. Turkey’s proxy force in Syria is derived from former rebels who fought the Assad regime, and includes extremist elements rebranded under the umbrella Syrian National Army (SNA).

In northwest Syria’s Afrin, formerly under SDF control in co-operation with Russia, there was a small Yezidi contingent among the majority Kurdish population until Turkey took control of the region in March 2018. Since then Yezidi temples have been destroyed, Dinnayi says, and Yezidis and Christians have been “expelled and deported.”

Human Rights Watch tells TIME it has not seen any forcible expulsions or deportations, but the situation is certainly bleak for the civilian population there. Although the Turkish government tightly controls media and NGO access to Afrin, rights groups have documented more than 100 cases of arbitrary detention, torture and in some cases executions of civilians by pro-Turkey armed groups.” This is something that we’ve seen happen regularly over the past year and ten months and there are no signs that anyone’s been held accountable,” says Sara Kayyali, Human Rights Watch’s Syria researcher. “Is it likely to happen again in North east Syria? Yes. Especially in the areas backed by Turkish factions.”

Turkey-backed armed groups are far from the only bad actors in Syria, of course. The Assad regime has committed countless atrocities against civilians, while Russian warplanes have repeatedly bombed hospitals to crush resistance to the regime, the New York Times reports. The YPG has continued to use child soldiers despite promising the UN it would not. But since Turkey’s offensive began, the Syrian Observatory for Human Rights recorded multiple incidents of Turkish proxy militias in northeast Syria looting abandoned homes, and kidnapping and executing civilians, including Kurdish politician and women’s rights activist Hevrin Khalaf. In one video, fighters appear to mutilate the corpse of a female Kurdish fighter. In another, fighters vow to kill Kurds who they refer to as “pigs” and “infidels.”

Günay Yildiz, a non-resident scholar with the Middle East Institute (MIE) in Washington believes that groups who allied with the U.S. will be vulnerable to further persecution on both political and religious grounds. “I expect widespread revenge killings against the Kurds, including civilians, and especially Yezidis,” he says. Russia’s presence might shield the Kurds from extremists in some areas, he adds, but the Assad regime’s incremental takeover of SDF authority means that “gradually, they will lose everything.”

A Trump tweet on Oct 23 did not give that impression. “Big success on the Turkey/Syria Border. Safe Zone created! Ceasefire has held and combat missions have ended. Kurds are safe and have worked very nicely with us. Captured ISIS prisoners secured” he wrote, contradicting the statement made a day earlier by his own special representative for Syria, James Jeffrey, that around 100 ISIS fighters had escaped, their whereabouts unknown. Speaking at the White House later that day, Trump said the ceasefire had saved the lives of “many, many Kurds.”

For Dinnayi, the U.S. actions in Syria, and the lack of practical support from other western governments, make them complicit in persecution he fears will come. “You are not only watching our ethnic cleansing,” he says, “you are collaborating indirectly in that ethnic cleansing.” 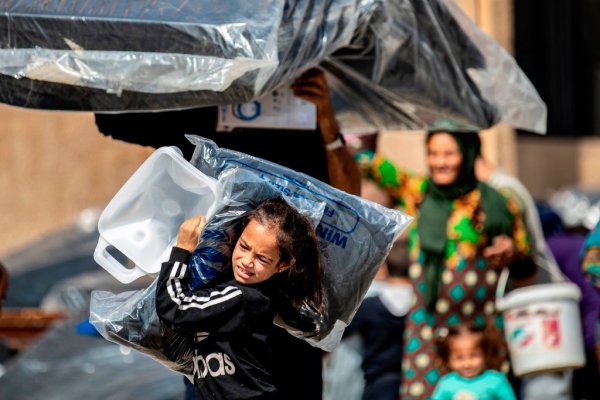 Can the U.N. Handle Another Humanitarian Crisis in Syria?
Next Up: Editor's Pick