Annie Leibovitz on the Democratization of Photography, Her Influences and Her Google Pixel Campaign

Annie Leibovitz, who has been photographing the world’s most influential figures for the past 49 years, revealed last week a new campaign called “Face Forward” shot exclusively on the Google Pixel smartphone. The new series done in partnership with Google features portraits of James Turrell, Megan Rapino, Chase Strangio, and others. “Face Forward” has been in the works for over a year as a project to document the stories of some of the most prominent changemakers today. “It’s an incredible opportunity for us to celebrate people in the present who are doing things to create a better future,” journalist and activist Noor Tagouri, who was photographed for the campaign, tells TIME.

Leibovitz, who helped in the development phases of the camera in the new Google Pixel, is far from new in working with high-profile figures and successfully capturing their stories, but “Face Forward” is her first series shot entirely on smartphone. The photographer says she was “suspicious” when working with an older version of the smartphone at first but felt impressed by it this time.

Here’s what Leibovitz had to say about her new campaign and what the democratization of photography means today.

How did you choose the subjects for this campaign?

Originally I thought I was just going to drive across the country and meet people, like Robert Frank. We got more realistic about time and zeroed in on people who are taking things very head-on and were important in their worlds, giving us hope in our world. I went back to some original sources, like Gloria Steinem, and asked her for lists. Some of the Native American subjects came from Gloria Steinem, and then we just did our due diligence, looking at every list of people who mattered and were doing things.

What do you hope sharing these portraits will accomplish or what feelings do you want them to spark in a viewer?

I think what we’re trying to do is recognize these people as people who are setting a tone and setting standards. I remember going out to photograph Bobbi Jean Three Legs at Standing Rock Reservation where she has worked so hard to protest the pipeline, and you get out to her land and you’re really brought to your knees when you see the beauty of this country. In that photograph, we’re standing on the edge of the Missouri River, and you realize her love for her land and her reservation.

How do you think this project fits into your work?

It fits in perfectly. I don’t get a chance to always do this kind of work. Vogue has always been politically conscious. We just did Congresswoman McBath, whose son was killed through gun violence, and I just did Nancy Pelosi for Vanity Fair. At this point in my life, I try to direct my work a little better, but I think this is really the time for this type of work.

The campaign is meant “to find a new way to document individuals making change in the world today.” Why is it important document change today?

I feel I am not unique in this respect; we all want to care and know about people who are doing the right things so we can have a sense of hope. The state of this country and our government today has brought out in every which way the most extraordinary, incredible people who care about who we are, what we’re doing, and what matters.

What is the role of photographs in making change today?

Photographs have never been better. I admire The New York Times, The Washington Post, and Time. Photojournalism has never been better. We’ve been relentless, and we have to be relentless to get things moved along. I find the portrait very powerful when it’s done well. In this particular set of pictures, there are two pictures that create the person–there’s a portrait of the person and then there’s something else that is in their life. With Bryan Stevenson, his great, great grandparents were slaves, and this other photo alongside his portrait is in a plantation outside of Montgomery, Alabama. You can see the slave quarters, and there’s this tree, which you can draw your own conclusions on. It’s a brief photo story.

Did any recent events, in particular, prompt you to work on a series centered around social changemakers?

I’ve always been interested in politics, from my early years at Rolling Stone and being on the road with Hunter S. Thompson. I’ve always been interested in social commentary, being on the road with Tom Wolfe. Today, it’s not one event, since this president has been in office, every single day something terrible, horrible comes up. I was trying to do this interview without having to bring him up.

How do you avoid glamour in your photos, making them more personal and intimate rather?

I like people to look like themselves. I do do work for Vogue, and sometimes I get a little frustrated, but they kind of know they’re not going to get the normal fashion picture. I started off as a fine art photographer, and I went to the San Francisco Art Institute. The photographers I admired were Robert Frank and Henri Cartier-Bresson and personalized reportage. When I first started working for Rolling Stone, I wondered if it was possible to work in a commercial landscape and take good pictures. I found that most of the really good photographers at school weren’t interested in something like Rolling Stone, but I found that in the commercial landscape of magazine work or doing something like this for Google, you can make something of it. You shouldn’t be shy to step into it to try to do something that is meaningful and goes to another place. You’re being given a space in a landscape to use and not abuse. Use it! When Google gave it to me they basically said ‘what do you want to do,’ and I thought of what I don’t get to do, and that’s what I did.

This campaign was shot exclusively on smartphone. How do you think the increased accessibility of the medium of photography is a positive thing?

Anything that makes photography easier is a good thing. The first photographers had to be scientists and chemists. I was brought up with going to the dark room and seeing the image show up in the pan. It was so romantic and magic, pure magic. It’s a new time now. There’s new technology, which is exciting too! I was very, very interested in trying to do a project with the camera phone because I really do believe in it, and I wanted to talk to the people who make them to maybe make them more useful for photographers. Quite honestly, using it as itself, rather than trying to make it a regular camera, I really did feel like I was gliding with it. You take pictures with your heart, your eyes, how you look, how you see and how you perceive in your mind; the equipment has very little to do with it in a way.

How much do you research or learn about a subject prior to a shoot or do you mostly learn their story along the way?

Of course you find out everything you can. I wouldn’t have found about Sarah Zorn’s boots if I didn’t learn when she was three years old she walked in her grandfather’s boots. You have to do your research. 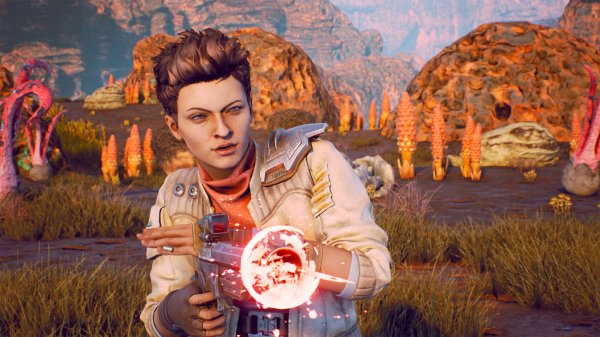 The Outer Worlds Makes Doing the Right Thing Both Fun and Impossible
Next Up: Editor's Pick