As Donald Trump flew to Texas Thursday for a fundraiser and rally, the revelations about the President’s involvement in Ukraine escalated into a full-fledged crisis.

Mick Mulvaney, the acting White House chief of staff, undercut the President’s denial of a quid pro quo when he told reporters that Trump withheld military aid as leverage to push Ukraine to investigate Democrats’ activity during the 2016 election—and then reversed himself hours later. Energy Secretary Rick Perry said he contacted Trump’s personal lawyer Rudy Giuliani at the president’s behest to talk about Ukraine—and then resigned. And European Union Ambassador Gordon Sondland told House investigators that Trump had delegated power over U.S. foreign policy in Ukraine to Giuliani, and added that it was “wrong” to link political requests to actions on Ukraine.

It’s not yet clear how Trump’s mounting troubles will affect the impeachment proceedings in Congress. Even if the Democratic House votes to impeach the President, the Republican-controlled Senate must vote to convict him in order to remove him from office. But the events of the past 24 hours have turned up the pressure on an increasingly embattled Trump.

In the White House briefing room Thursday, Mulvaney publicly confirmed that Trump wanted Ukraine to investigate Democratic Party actions during the 2016 election in exchange for releasing the flow of military aid. “The look back to what happened in 2016 certainly was part of the thing he was worried about in corruption with that nation, and that is absolutely appropriate,” Mulvaney said, explaining why the aid to Ukraine was delayed. “Get over it. There’s going to be political influence in foreign policy.”

“Did he also mention to me in [the] past the corruption related to the DNC server? Absolutely,” Mulvaney said, confirming that Trump had also brought up the debunked conspiracy that Ukrainian individuals were involved in the investigation into the Russian hacking of the DNC server in 2016. “No question about that. But that’s it, and that’s why we held up the money.”

After Trump’s senior-most aide announced publicly that political considerations influenced Trump’s foreign policy, Trump allies scrambled to do damage control. Trump’s personal lawyer Jay Sekulow told TIME Trump’s legal counsel “was not involved” in Mulvaney’s briefing, and a senior official in the Department of Justice also distanced DOJ from Mulvaney’s comments. “If the White House was withholding aid in regards to the cooperation of any investigation at the Department of Justice, that is news to us,” the official wrote in a statement.

The reaction was swift. Within hours, Mulvaney had walked back his comments, repeatedly asserting that the White House decision to hold up nearly $400 million in military aid had nothing to do with an investigation into hacking the Democratic National Committee’s server and whether that server ended up in Ukraine. “Let me be clear, there was absolutely no quid pro quo between Ukrainian military aid and any investigation into the 2016 election,” he said in a statement. “There never was any condition on the flow of the aid related to the matter of the DNC server.” Mulvaney’s carefully-worded statement pointedly did not mention any other investigations into Democrats, including Trump’s fixation on Burisma, the Ukrainian gas company that once employed former Vice President Biden’s son.

While Mulvaney said during the press briefing that the delay in military aid “had absolutely nothing to do with Biden,” his subsequent statement did not mention Burisma or Biden at all. The omission was conspicuous in part because text messages made public by House investigators last week made it clear that Ukrainian officials believed that the White House visit they sought was dependent on their opening a probe into both the DNC server and Burisma. “Once we have a date we will call for a press briefing,” a Zelensky aide texted the U.S. envoy to Ukraine Kurt Volker. The briefing would announce “among other things Burisma and election meddling in investigations,” he wrote. Volker responded, “Sounds great!”

While Mulvaney’s comments exploded onto cable news chyrons, Trump’s hand-picked ambassador to the European Union, GOP donor Gordon Sondland, began speaking to House investigators. He told them it would have been “wrong” to withhold military aid in an effort to pressure Ukraine to take on a political investigation. “Let me state clearly: Inviting a foreign government to undertake investigations for the purpose of influencing an upcoming U.S. election would be wrong,” Sondland said. “Withholding foreign aid in order to pressure a foreign government to take such steps would be wrong. I did not and would not ever participate in such undertakings.”

Sondland also confirmed the central role Giuliani has been playing in Trump’s dealings with Ukraine. “It was apparent to all of us that the key to changing the president’s mind on Ukraine was Mr. Giuliani,” Sondland said. “Our view was that the men and women of the State Department, not the president’s personal lawyer, should take responsibility for all aspects of U.S. foreign policy toward Ukraine.”

Trump’s outgoing Energy Secretary Rick Perry also amplified Giuliani’s rarified status as it relates to Trump and Ukraine. Perry, who resigned Wednesday evening, told the Wall Street Journal that Trump personally told him last spring to work with Giuliani to get the Ukrainians to “straighten up their act” on investigating 2016 before Trump would agree to meet the country’s new president.

“The fact that this was about corruption in Ukraine and had nothing to do with politics defies credulity,” says Brett Bruen, a former National Security Council official under President Obama. “The FBI isn’t in Kiev investigating the matter, instead [Trump] has his personal attorney out looking for dirt.”

This cascade of new revelations came as Senate Republicans publicly objected to Trump’s decision to withdraw U.S. troops from Syria in the face of a Turkish invasion and the slaughter of Kurdish fighters who were fighting alongside U.S. soldiers a few weeks ago. White House officials are concerned that Republican outrage over Trump’s Syria decision could weaken their support for the President in the impeachment proceedings.

So far, Trump has enjoyed strong support among Republican lawmakers, making it unlikely that they would vote to convict him in an impeachment trial. The Republican-controlled Senate Intelligence Committee is quietly gathering information on Trump and Ukraine, but so far, hasn’t decided to take an adversarial approach to Trump.

The pace of recent revelations could threaten that solid support in the Senate. “The idea that President Trump is right because he’s a Republican and I am a Republican will only hold so much water,” says Dan Eberhart, a GOP donor. “At some point Republicans have to reexamine the facts and consider it’s time to break the glass, and just change your mind.” Democrats are gambling that their investigations, and the steady drumbeat of revelations resulting from them, will tilt the scales of public opinion on Election Day 2020.

Senate Majority Leader Mitch McConnell has started to walk through the nuts and bolts of a Senate trial with his caucus to “normalize” the process, according to a Senate leadership aid. McConnell used a PowerPoint presentation on Wednesday at the caucus lunch to help familiarize his fellow Republicans with the rules of impeachment, including a required starting time each afternoon and a ban on senators speaking during the trial. The same leadership aide says McConnell has suggested working out a deal with Senate Minority Leader Chuck Schumer that would allow lawmakers to meet on legislation during the mornings, so they can focus on impeachment in the afternoons.

The impeachment process may still be in early stages, but the president finds himself in an increasingly precarious spot. 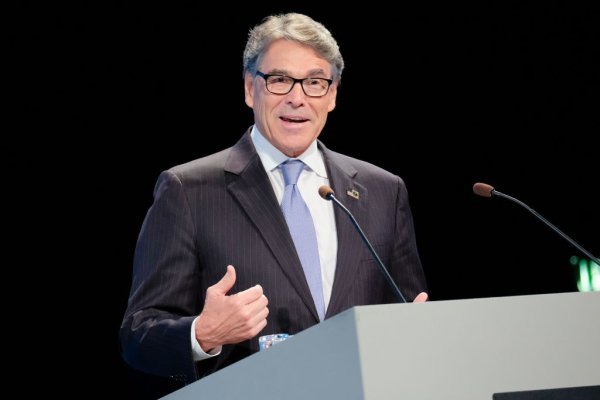 Energy Secretary Rick Perry Has Told Trump He Will Leave His Post Soon: Sources
Next Up: Editor's Pick