It’s been a meme-worthy month for Keke Palmer and, for everyone on the internet’s sake, we can only hope that she doesn’t stop gifting us with viral magic anytime soon.

It all started in September when a clip from an interview Palmer did with Vanity Fair blew up across the web. In the clip, Miss Keke P, lookin’ extra glossy, claims that she doesn’t recognize Dick Cheney. “Sorry to this man,” Palmer concedes after failing to identify the former vice president from a photo of him sitting on a plane.

But Palmer’s time on top of the meme food chain didn’t end there. Ever since the original clip went massively viral and became the internet’s new favorite way to dismiss someone, the savvy Hustlers star has kept her fans coming back for more.

Here’s everything you need to know about the Keke Palmer memes the internet is going crazy for.

During a September video interview with Vanity Fair in which she was hooked up to a lie detector test, Palmer was asked if she thought True Jackson, the character she played on Nickelodeon’s True Jackson, VP who — as you may have surmised from the show’s title — is made vice president (albeit of a high-end fashion company, not the United States of America), or Dick Cheney was more cut out for the role of VP.

Her interviewer then handed her a photo of Cheney on a plane, prompting an unintentional yet perfectly shady response that was heard round the world. “Who the hell is…ooh y’all are really testing me on some stuff. I hate to say it, I hope I don’t sound ridiculous. I don’t know who this man is,” Palmer confessed. “I mean, he could be walking down the street and I wouldn’t know a thing. Sorry to this man.”

The lie detector analyst quickly confirmed that, according to the test, Palmer was telling the truth, which somehow only made her reply all the more hilarious.

After the clip was shared online, people immediately began reposting the accidental roast — and specifically the tagline, “sorry to this man” — as a means of dismissing a person or situation.

Here were some of the best responses.

“I know this man”

Just a few weeks after the “Sorry to this man” meme took off, Palmer ended up back in mainstream meme conversation thanks to a hilarious moment on her Good Morning America spinoff Strahan, Sara & Keke that directly juxtaposed her Dick Cheney response.

After being asked who wrote and directed the iconic 1980s movies Sixteen Candles and Breakfast Club, Palmer cut off her co-host Sara Haines to enthusiastically confirm that she knew the answer. “I know this man! I love him” she exclaimed. “I know him, y’all! I know him. I know this man!”

The answer, of course, was John Hughes, which Palmer ended up getting even though Strahan claimed that someone in the audience shouted out Hughes’ name for her. But regardless of how she got there, the meme damage was done.

Palmer’s latest meme-able moment came during the Oct. 14 episode of Strahan, Sara & Keke when the day’s guest, Bachelorette alum Mike Johnson, tried to ask her out on camera. After lamenting that he had mishandled his recent romance with Demi Lovato, Johnson turned to Palmer to shoot his shot.

“I made a mistake. I don’t like dating in public. But if I were to ask you if we could go on a date in the public…,” Johnson began.

In response, Palmer stared out at the audience with wide eyes before turning to her co-host Michael Strahan and demanding that he ask the next question. When Strahan pretended not to hear, Palmer eventually just put a kibosh on the situation by announcing, “I’m at work!”

Before the internet could get the jump on her, Palmer took full advantage of the awkward interaction by making it into a meme of her very own. With Keke herself on board, the joke quickly took off.

Later in the week, Palmer was asked if she had any intention of going on a date with Johnson.

“No,” she proclaimed. “First of all, I get real spooked about entertainers or reality [stars]. I don’t know, it really scares me to date people in the industry. That’s number one. Number two: He asked me in front of everybody. I felt totally like, ambushed…I felt ambushed. I felt like it was a big ol’ gag.” 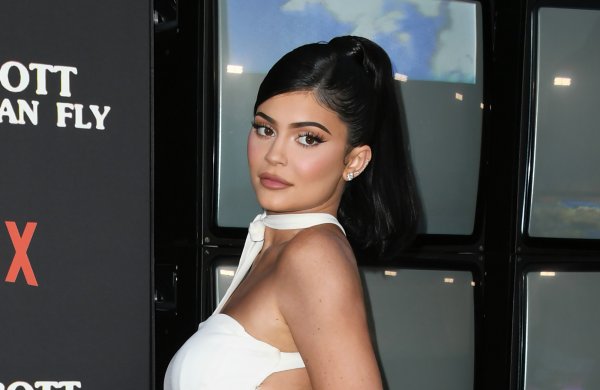 Kylie Jenner Saying 'Rise and Shine' to Her Daughter Is the Internet's New Favorite Meme to Greet the Day With
Next Up: Editor's Pick