What to Know About Blizzard, Hong Kong and the Controversy Over Politics in Esports

A 12-Foot Orc statue is behind bars at the Blizzard Entertainment in headquarters in Irvine, Calif., on Aug. 6, 2015.
MediaNews Group/Orange County Re—MediaNews Group via Getty Images
By Peter Allen Clark

Though video game culture is seldom a quiet, peaceful place, the uproar over Blizzard Entertainment punishing a popular gamer for showing support for Hong Kong protesters has shaken the whole industry.

Ng Wai Chung, a Hearthstone player from Hong Kong who goes by the name “Blitzchung,” championed the pro-democracy protests in his hometown that have raged for the past five months during his appearance on a post-game stream. And Blizzard, the developer and publisher of Hearthstone, quickly responded with blanket punishments for everyone involved. It’s the latest example of an American company caught between business interests in China and western-world freedom of speech.

Outrage over Blizzard’s reaction swiftly came from players, industry titans and politicians. It also came at a time when international attention on the protests and wariness over China’s response to it has grown. Eventually, Blizzard reduced the punishment, but it doesn’t seem like the negative fan sentiment will disappear any time soon—especially after the video game giant disciplined another group for supporting Hong Kong.

Blizzard told CNN that it had banned the three students for six months from esports tournament play for “knowingly breaking the rules.”

Here’s what you need to know about the Blitzchung, Blizzard and the Hong Kong protests:

According to Liquipedia, he has earned more than $20,000 playing in various games and tournaments connected to the game.

Why did Blizzard punish Blitzchung?

On Oct. 6, Blitzchung appeared on the official Taiwan Hearthstone stream after the Grandmasters second season of 2019 ended. During an interview with two streamers, Blitzchung put on a ski mask and gas mask, similar to ones worn by Hong Kong protesters to protect themselves from tear gas and banned by the government earlier this month.

The streamers, apparently aware of Blitzchung’s motivations, ducked down to hide their faces. For his part, Blitzchung reportedly said in Chinese, “Liberate Hong Kong. Revolution of our age.”

In a statement to Inven Global later on Oct. 6, Blitzchung defended his message on the stream.

“As you know there are serious protests in my country now. My call on stream was just another form of participation of the protest that I wish to grab more attention,” his statement read. “I put so much effort in that social movement in the past few months, that I sometimes couldn’t focus on preparing my Grandmaster match. I know what my action on stream means. It could cause me lot of trouble, even my personal safety in real life. But I think it’s my duty to say something about the issue.”

Two days later, Blizzard issued a “ruling” that Blitzchung’s message on the stream violated a section of the Grandmasters’ rules that states players would refrain from “Engaging in any act that, in Blizzard’s sole discretion, brings you into public disrepute, offends a portion or group of the public, or otherwise damages Blizzard image…”

“Grandmasters is the highest tier of Hearthstone Esports and we take tournament rule violations very seriously,” the ruling stated.

Blizzard punished Blitzchung by taking away any prize money he won in the Grandmasters second 2019 season and banned him from playing in Hearthstone esports professionally for a year.

In the ruling, Blizzard also said it would cut ties with the two streamers who attempted to hide themselves from Blitzchung’s actions, saying “We will also immediately cease working with both casters.”

Blizzard is a huge developer and publisher of video games, responsible for some of the most popular titles worldwide like World of Warcraft, Overwatch, the Starcraft series and the Diablo series.

Besides the cited rule violation, the most obvious reason for Blizzard to punish all those involved is China’s enormous, and expanding market. Esports is big business in China, with analyst reports speculating that the sport could be worth $3 billion as the government moves to recognize it as a profession.

Additionally, the largest gaming investor company in the world, China’s Tencent, owns a 5% stake in Blizzard, according to multiple reports. Tencent has also partnered with Activision Blizzard (Blizzard Entertainment’s parent company) on projects such as Call of Duty Online for the Chinese market.

Activision Blizzard is among the largest gaming companies in the world, with revenue of $7.5 billion in 2018.

How have other gamers responded?

In the English-speaking world, backlash to Blizzard’s ruling came quickly and loudly from Hearthstone players, as well as other gamers. They blasted the decision, and proudly aligned themselves with Hong Kong protesters.

Shortly after Blizzard’s decision, a moderator from the Hearthstone subreddit (which boasts more than 1 million subscribers), decided to step down from that position saying, “After four years of being a moderator for the sub and an advocate for this game, I am leaving the moderation team as this is no longer a company I want to support or follow.”

The Reddit moderator’s post received more than 48,000 upvotes and an outpouring of respect for the moderator’s decision and remorse for Blizzard’s. In the past week, the subreddit has been flooded with posts calling out Blizzard, which have received hundreds of thousands of upvotes. This reaction isn’t just seen on reddit.

A notable esports commentator, Brian Kibler, wrote a long Medium post that tried to understand Blizzard’s perspective, but ultimately told the company he would no longer work on Hearthstone Grandmasters finals.

“The heavy-handedness of it feels like someone insisted that Blizzard make an example of Blitzchung, not only to discourage others from similar acts in the future but also to appease those upset by the outburst itself,” Kibler wrote. “That kind of appeasement is simply not something I can in good conscience be associated with.”

Fans of one of Blizzard’s other huge properties have joined in to protest the company and support Hong Kong. Players of Overwatch, an online multiplayer shooter, have taken to using the ice-gun wielding character Mei as a symbol of protest against the Chinese government and Blizzard.

The idea took hold with parts of the internet and has inspired a great deal of fan art, all in the service of shaming Blizzard.

How have Blizzard employees responded?

The day after Blizzard’s initial punishment, a group of employees at the company walked out in protest, according to a report from The Daily Beast.

“I’m disappointed,” a Blizzard employee told the Daily Beast. “We want people all over the world to play our games, but no action like this can be made with political neutrality.”

The Daily Beast’s reporting said that up to 30 people gathered at the company’s famed orc statue in Irvine, Calif. Later that day, a post on Reddit from someone who claimed to be a Blizzard employee showed a picture of the apparent protest, with employees holding umbrellas, which are a continued symbol of Hong Kong protests.

How have the video games industry and politicians responded?

Blizzard’s decision made waves through some of the biggest players in the video games industry, some of whom reacted in opposing ways.

Riot Games, creator of the another popular esports game, League of Legends, put out a stern reminder to esports competitors to keep their commentary on the game and away from sensitive issues. Last week, Global Head of League of Legends Esports John Needham issued a statement that made that clear to players saying, “We serve fans from many different countries and cultures, and we believe this opportunity comes with a responsibility to keep personal views on sensitive issues (political, religious or otherwise) separate.”

Epic Games, the company behind the cultural behemoth Fortnite, took the opposite approach. Founder and CEO Tim Sweeney simply said on Twitter last week, “Epic supports the rights of Fortnite players and creators to speak about politics and human rights.”

Blizzard’s move against Blitzchung and the ensuing backlash also caused a headache for Nintendo, as the affair came right before the release of Blizzard’s Overwatch title for the Nintendo Switch. On Oct. 14, the Twitter account for the Nintendo store in New York City tweeted out the cancellation of an Overwatch event planned for Oct. 16. The tweet put the cause of the cancellation squarely on Blizzard.

As this whole affair comes on the heels of a very similar recent story that pitted the NBA versus China, politicians from both sides of the aisle have also weighed in on Blizzard’s move. Both Sens. Ron Wyden and Marco Rubio tweeted their repudiation of censuring the Hearthstone player.

How did Blizzard reduce the punishment?

After days of silence as the outrage grew louder, Blizzard President J. Allen Brack responded to the criticism with a blog post on Oct. 12.

In the post he announced that the company would be reducing Blitzchung’s punishment and giving him the prize money from the tournament he had competed in, though Brack defended the cause the company initially cited.

“In the tournament itself blitzchung *played* fair. We now believe he should receive his prizing,” the post read. “But playing fair also includes appropriate pre-and post-match conduct, especially when a player accepts recognition for winning in a broadcast. When we think about the suspension, six months for blitzchung is more appropriate, after which time he can compete in the Hearthstone pro circuit again if he so chooses.”

Additionally, Brack explicitly denied that any speculation that sensitivities about China was the cause of this decision is false.

“The specific views expressed by blitzchung were NOT a factor in the decision we made,” he wrote. “I want to be clear: our relationships in China had no influence on our decision.” 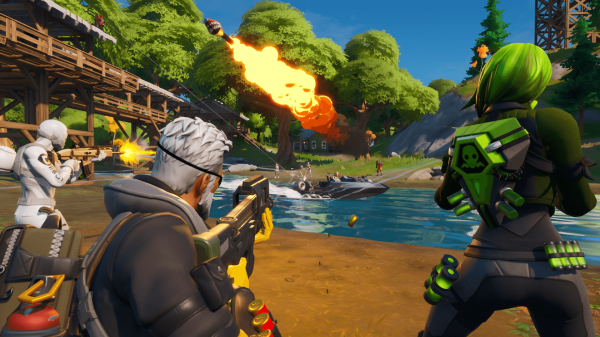 How Fortnite Turned a Routine Server Outage Into a Minor Media Phenomenon
Next Up: Editor's Pick