How to Rethink Whistleblowing for Today's Post-Truth World

Ideas
By Martin Bright
Bright is the journalist from the London Observer who broke the story behind the new movie Official Secrets. He now runs the not-for-profit organization Creative Society, which helps young people break into the arts.

The emergence of a second whistleblower claiming first-hand knowledge of President Donald’s Trump’s dealings with Ukraine is a highly unusual development, not least because those responsible for leaking intelligence information usually act alone. From Daniel Ellsberg’s disclosure of the Pentagon Papers through to Edward Snowden himself, the mythology that grows up around whistleblower is built upon the idea that these are either exceptionally moral individuals or crazy, narcissistic loners. Sometimes both.

In the search for evidence that Trump put pressure on the Ukrainian President to investigate one of his political rivals, Joe Biden, it will clearly help if there is more than one credible source. Whether or not this turns out to be a concerted and organized campaign from Trump’s opponents within the intelligence community, there is no doubt this is a different way of doing things.

The current whistleblowing scandal coincides with the release of Official Secrets, a movie starring Keira Knightley as British intelligence service whistleblower Katharine Gun, who discovered to her cost exactly how difficult it is to reveal government wrong-doing when you go it alone.

The action of Official Secrets opens at the beginning of 2003, when George W. Bush and Tony Blair were still hoping to persuade the United Nations Security Council to back intervention in Iraq. U.S. Secretary of State Colin Powell was about to make his now notorious speech at the UN and the Bush administration was desperate to dig up anything to help it twist arms to get the result it needed.

Gun was working at the Government Communications Headquarters (GCHQ) as a Mandarin translator when she and other colleagues received a memo from the U.S. National Security Agency asking for help. The email, send from the NSA’s Head of Regional Targets, Frank Koza, asked GCHQ to target UN Security Council members in order to obtain: “the whole gamut of information that could give US policymakers an edge in obtaining results favorable to U.S. goals or to head off surprises”. The young translator was so horrified at the apparent attempt to fix the vote that she printed off the memo, took it home in her handbag and later posted it to a friend with connections in the media.

As the journalist who eventually published Katharine Gun’s revelations in the London Observer, I have been taking part in panel discussions across the United States and Europe to publicize the film. The conversation has inevitably turned to the relevance of the movie to the current international context. Official Secrets is a story about political accountability and the sanctity of truth. Bush and Blair may have made catastrophic errors of judgement, but they both recognized that it mattered if they were caught out in a lie. Katharine Gun and the team of journalists at the London Observer, who broke the story, worked under the assumption that politicians on both sides of the Atlantic cared if they were shown to have misled the public about finding a diplomatic alternative to war in Iraq. Their successors Trump and Johnson seem to have fewer scruples. The Scottish courts have taken the unprecedented step of accusing the British Prime Minister of misleading the Queen over his decision to suspend the UK parliament. Meanwhile, the number of untruths told by the U.S. president in his early days in office depends on your source: the New York Times has the score at 103 in his first ten months, while The Washington Post has over 2,000 in just under a year. If similar revelations to Katharine Gun’s were made today, there is the distinct possibility that the leaders of the free world would merely shrug.

Post-truth politics raises serious questions for the future of journalism, particularly at a time when traditional media models are under such challenge from alternative online sources of information. It is no coincidence that some of the most significant developments in 21st century journalism have involved the transformation of traditional journalistic practice. This has often been achieved in alliance with organisations outside the mainstream, such as Wikileaks or Bellingcat (the open-source investigative site that helped establish Russian secret service responsibility for the Skripal poisonings in the UK). The recent Netflix documentary, The Great Hack, paid tribute to the work of Carole Cadwalladr, a freelance journalist who has developed a single-minded approach to exposing how data analysis company Cambridge Analytica used social media to subvert the results of elections, including the 2016 presidential race and the Brexit referendum in the same year.

If journalism is to adapt to the new landscape, reporters will also have to find new ways of working with whistleblowers. It may no longer be enough to sit back and wait for citizens of conscience to come to us. Indeed, Katharine was a particularly frustrating source in that she did not bring her information directly to the Observer. She sent the leak first to a friend, who passed it to an anti-war activist, who finally passed it to me. We did not have the opportunity to advise and manage our source. We therefore spent an excruciating period of weeks independently verifying the Koza memo, while the world edged closer to war.

Ultimately, if the post-truth crisis deepens, we will need a whole set of new tools as journalists. It will no longer be enough to simply sit and wait for whistleblowers to come to us.

I have three distinct proposals, which between them could transform the way we operate as journalists:

“Now is precisely the time for bold approaches to whistleblowing,” says Mary Inman, who runs the international whistleblower practice at law firm Constantine Cannon. “We are on the verge of a cultural paradigm shift in which existing notions of whistleblowers are no longer compatible with new realities.”

“We are rapidly moving towards a more enlightened view of whistleblowers in which they are neither demonized as disloyal snitches nor glorified as courageous heroes, but instead are normalized as ordinary employees doing a regular, accepted part of their jobs.”

Tom Mueller has interviewed more than 200 whistleblowers in his new book Crisis of Conscience: Whistleblowing in the age of Fraud. Like Inman, he believes we need a new approach that moves beyond the traditional reporter-whistleblower relationship: “Strong, well-funded and independent investigative journalists are invaluable megaphones for whistleblower messages,” he says. “But if we remain in a post-truth world for long, the fundamental currency of whistleblowing – facts – becomes debased, and the whistleblowing act itself will be pointless.” Mueller believes that whistleblowers can help us become better citizens. “Many whistleblowers are loners – and I think we need to start celebrating individuals who think with their own heads and hearts, who have enough self-belief not to catch the infectious enthusiasm of the team.”

Carole Cadwalladr, who has worked closely with whistleblowers on the Cambridge Analytica story shares Mueller’s conviction that we need to learn from their exceptionism: “The reality is that whistleblowers often are exceptional people. There does need to be a cultural shift. There should be a moral imperative to step up and speak out when people witness wrongdoing.”

Official Secrets may not be one of the costume dramas that first made Knightley’s reputation. But this is still every bit a period piece. The political and journalistic context in which the film is set is just 16 years ago, but it feels like another age – an age when journalists and politicians at least paid lip service to the rules of accountability. We can at least hope that it will become a period piece in another sense and in future whistleblowers will not feel so alone. 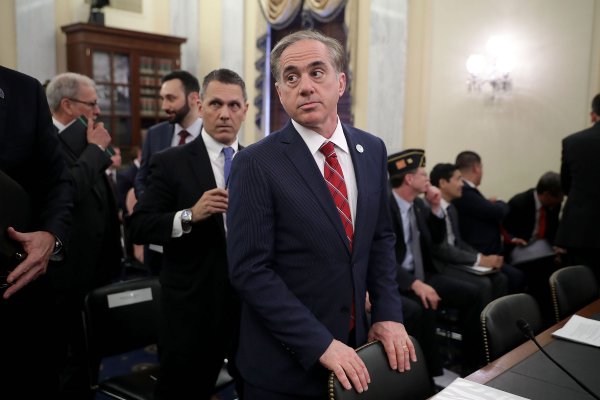 I Ran the VA Under President Trump Until He Fired Me. Our First Trump Tower Meeting Was a Job Interview Unlike Any Other
Next Up: Editor's Pick