If you’re looking for nostalgia, you’ve got loads of options. From rebooted movies to digitally remastered shows, the childhood you think you remember is always at your fingertips, ready for consumption for a nominal fee.

In the case of video games, Sega’s new Genesis Mini will charge you a cool $79 for the privilege, a fraction of the price it went for back in 1989. If you were a Sega fan as a younger gamer, or want to know what you missed, it’s money well spent. A strong library of titles makes it a great gift or impulse buy, but a few cut corners will irk some more discerning gamers. Either way, you’ll have a great time getting to know Sonic the Hedgehog and all the others here.

Here’s the thing with miniature consoles: they’re pretty hit or miss. Not only are they packed with — let’s face it — old games, many titles are hurt by advancements in game design and development. In a way they’re anthropological as much as they are enjoyable, something to show off to your friends or kids to remind them of what games were like once upon a time.

And the companies making them often cut corners on such an already handicapped gadget. Nintendo’s been in the miniature console game for a few years with its NES Classic and Super NES Classic offerings, and Sony dipped its toe in the waters with its PlayStation Classic. But only Nintendo got it right, with the other panned for its dismal title selection and disappointing controller design.

Sega’s Genesis Mini sticks the landing where it matters most: the games. Of the 42 titles to choose from, the vast majority well and truly slap. From the four included Sonic the Hedgehog games to iconic titles like Golden Axe, Ecco the Dolphin, and the Mega Man: The Wily Wars (a three-game compilation), there’s a high chance Sega fans will find themselves immensely satisfied with the lineup.

The games look great, too. While there aren’t as many customization options in terms of emulating that tried and true tube television look, you can either maintain the 4:3 aspect ratio or stretch it out into 16:9 to ruin your enjoyment.

That doesn’t mean the Genesis Mini couldn’t be better. While one may consider themselves grateful they don’t have to fumble around for component cables to connect this retro console to their 4K TV, a bit of the magic is lost when you upscale a classic. The cool vintage effects present on existing game emulators aren’t there, so you can’t approximate the same distortions or fuzzy graphics like you can on a PC.

Aside from the miniaturized console itself, buyers get a pair of wired controllers, along with the requisite cables required to hook up to your modern-day TV. That pair of controllers is one of the few flawed elements in the package. The replicas of the original Genesis controller connect via USB, with a six-foot cable keeping you in your seat. They work well enough, until you want to get serious in a game like Street Fighter II: Special Champion Edition. With only a directional pad and three buttons (along with the “Start” button), it lacks the extra three buttons present on the Genesis controllers released in 1993, immensely helpful when it comes to fighter game combos. Sega says the Genesis Mini is compatible with six-button controllers made by companies like Retro-Bit, however.

Ironically, the Genesis Mini’s competition is Sega itself — there’s no shortage of options when it comes to enjoying Sega titles on other consoles. You can buy Mega Man collections on nearly every platform, and Street Fighter is on every modern console worth its salt. Sonic? They’re making a movie about him, so it’s safe to say you can find somewhere to enjoy the speedy blue mammal.

But your PS4 doesn’t come with a pair of controllers reminiscent of your childhood days spent wasting away in front of a tube television. Your hefty gaming PC or ultralight laptop still doesn’t have the minuscule footprint of a shrunken down facsimile of an iconic piece of gaming history. And that’s why the Genesis Mini is cool. It encapsulates everything enjoyable about the games you enjoyed back then, and puts them in a package that’s both self-aware and endearing. Best of all, there’s no software update to download. Just plug it in and start playing, just like old times. 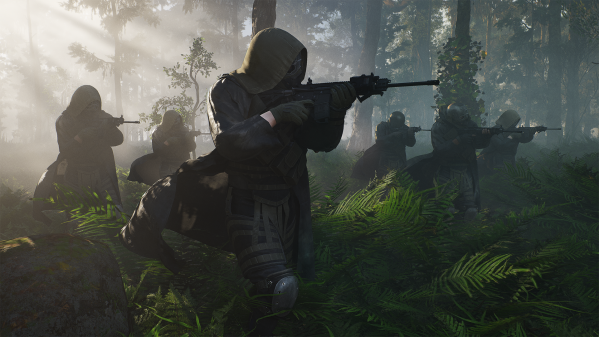 Ghost Recon Breakpoint Is Just Too Frustrating to Love
Next Up: Editor's Pick