Massachusetts Senator Elizabeth Warren unveiled a slew of new policy proposals Wednesday designed to address the disproportionate impact of environmental ills on vulnerable communities. The 2020 presidential hopeful promised to put environmental justice “at the center of our response to climate change” if she succeeds in her White House bid.

The plan includes a range of specific policy prescriptions, from a promise to pursue criminal penalties for polluters to a spike in funding for programs that guarantee clean drinking water. Considered holistically, the plan would represent a sharp departure from the Trump-era during which experts say such concerns have been sidelined.

“Our crisis of environmental injustice is the result of decades of discrimination and environmental racism compounding in communities that have been overlooked for too long,” she said in a statement accompanying the plan. “Justice cannot be a secondary concern.”

Environmental justice — an umbrella term describing the need to address the disproportionate impact that environmental ills have on people of color and low-income Americans — has increasingly gained attention in the presidential race.

All of the major Democratic candidates have made at least some gesture to show their concern for environmental justice. The topic was also a significant focus for many candidates at a nationally televised climate change town hall last month.

“This is the most attention in a presidential primary campaign season that I’ve seen in 20 plus years,” says Mustafa Santiago Ali, vice president at the National Wildlife Federation who previously ran the Environmental Protection Agency’s environmental justice program. “And you have people not only just saying the words, but also actually putting down some steps, some strategy.”

Both former Vice President Joe Biden and Vermont Senator Bernie Sanders include an environmental justice plank in their plans. Sanders has referenced everything from cleaning up toxic sites to protecting vulnerable communities from the impacts of climate change.

Some have gone even bigger. California Senator Kamala Harris partnered with New York Representative Alexandria Ocasio-Cortez to unveil a plan that will require the government to score how every new piece of environmental legislation addresses environmental justice and mandates that agencies hire a senior climate justice advisor.

New Jersey Senator Cory Booker proposed a comprehensive bill that would require federal agencies to develop an environmental justice strategy and open new legal avenues for people and communities to sue. Booker, who serves on the Senate’s Environment and Public Works Committee, also has a long history of introducing legislation on the issue in Congress.

Warren’s proposal — which comes a month after she released a sweeping $3 trillion plan to address climate change — is really a combination of a slew of different ideas and policy prescriptions, fitting with her “I have a plan for that” mantra that has bolstered her reputation as a policy wonk bringing real ideas to the race.

Her platform would fortify funding for key initiatives, including a program to revamp the country’s ailing water infrastructure and incentives for clean energy in communities that couldn’t afford it otherwise. In her plan, she also calls for more aggressive enforcement, using the EPA’s Office of Civil Rights to address environmental discrimination and pass new legislation to make it easier for the government to pursue criminal charges against executives who break environmental laws.

The plan would seek to ensure that vulnerable communities share in any economic gains that come as the result of a transition to clean energy. Warren says she would spend at least $1 trillion of her climate investment on programs that directly aid those communities.

In a recent trip to the Detroit area, Warren visited a community located next to industrial facilities and an oil refinery. “If you can’t meet the standards, then you’re going to be shut down,” she said in a video from the visit. “You don’t get to push it off on our kids.” 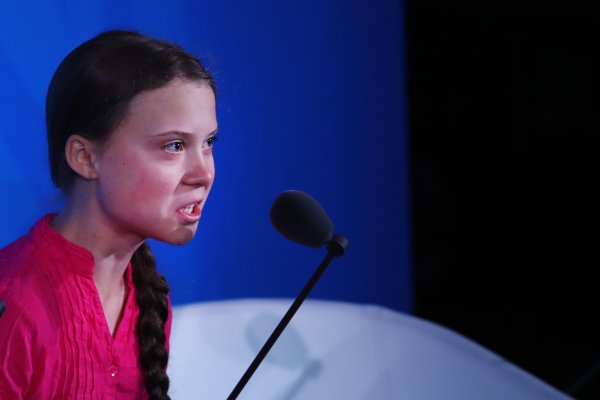 'You Have Stolen My Dreams and My Childhood': Greta Thunberg Gives Powerful Speech at UN Climate Summit
Next Up: Editor's Pick