The Trump Administration Released a Plan to Fight Climate Change. It Could Actually Make Things Worse

The Trump Administration released a new plan Tuesday to reduce carbon dioxide emissions from power plants and address climate change. But the proposed regulation from the Environmental Protection Agency, which would replace the Obama-era Clean Power Plan, has a serious flaw: it could make climate change worse.

The plan requires states to come up with their own rules to make coal-fired power plants more efficient. Because more efficient coal plants would make that energy source more competitive compared to less carbon-intensive alternatives, some analysts argue that the measure could lead to increased carbon emissions.

“EPA is not denying that climate change is happening or EPA’s obligation to address the harmful health impacts of carbon pollution that’s fueling climate change,” says Gina McCarthy, head of the EPA under President Obama. But the plan is “an opportunity not just to keep carbon pollution neutral but increase it.”

The root of the issue is simple: the Trump Administration has no interest in fighting climate change. In less than two years in office, Trump has appointed officials who deny the science of global warming, sought to defund climate change programs and begun the process of pulling the U.S. out of the Paris Agreement on climate change. Before taking office he called global warming a “hoax.” Indeed, the White House press release for the new regulation does not contain a single mention of climate change or global warming.

But, by law, the EPA is required to try to cut climate change-causing greenhouse gas emissions. That’s thanks to a 2007 Supreme Court ruling that found that the EPA is required to regulate pollutants that harm public health under the Clean Air Act. Two years later, the EPA released a scientific document — known as the endangerment finding — showing that greenhouse gas emissions do just that.

Announcing the regulation on Tuesday, Bill Wehrum, the EPA’s assistant administrator for the office of air and radiation, told journalists that he had worked at the EPA under President George W. Bush when the agency tried to argue that it did not have the legal authority to regulate greenhouse gas emissions. But Wehrum acknowledged that move had failed.

“To be abundantly clear, this is a regulation of greenhouse gases,” he says of the new rule. “We’re not proposing to rescind the endangerment finding.”

The new rule is a dramatic departure from the Obama-era measure that it replaces. In total, the Clean Power Plan aimed to reduce emissions from the power sector by 32% by 2030. The measure set emissions reduction standards on a state-by-state basis and allowed state officials to come up where their own plans to meet the federally defined goal with most states doing so by moving from coal to natural gas. A technical analysis released by the EPA suggests that the new plan would decrease carbon dioxide emissions by no more than 2% compared to doing nothing. (Still, the U.S. could reach or near the Clean Power Plan’s goal as a result of other factors pushing the country away from coal).

Trump, who is expected to tout the plan at a rally Tuesday night in West Virginia, loves what he has called “beautiful, clean coal” and has launched a widespread effort to save the energy source from disappearing from the U.S. energy mix. Today, about a third of U.S. electricity is generated from coal-fired power plants, down from more than half at the turn of the century.

Trump’s efforts to save coal have included everything from moving to pull out of the Paris Agreement on climate change to using national security law to propose intervening in electricity markets to protect coal. Analysts say that Trump’s efforts will be unable to reverse the trend. And, while they could help stabilize the coal industry, the industry’s long-term prognosis remains bleak as the country experiences a boom in cheap natural gas and the price of renewable energy continues to fall.

More broadly, Trump has sought to reverse Obama-era measures to address global warming. Earlier this month, the administration announced a change to vehicle emissions standards that will allow them to emit more. And last year Trump announced that he would pull the U.S. out of the landmark Paris Agreement on climate change.

But EPA officials did not describe their move as an attempt to save coal. Instead, the EPA argued that the law only allows the the agency to regulate individual power plants not the broader power system and electricity mix. In that view, regulating coal-fired power plants is as far as the agency can go. Officials pointed to the fact that the U.S. Supreme Court had stayed the implementation of the Clean Power Plan in response to a lawsuit arguing that the EPA had over extended itself.

“We need to bring ourselves back within our authority,” says Wehrum. Now, the tables have turned, and the EPA will have to answer lawsuits coming from the other side to answer whether its ignoring its obligation to address the issue. 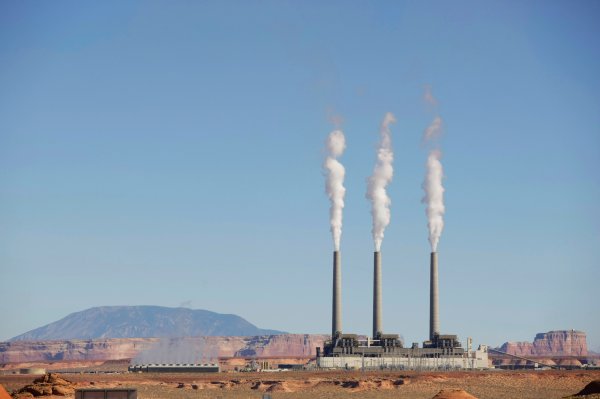 Why Democrats Are Taking Fossil Fuel Money Again
Next Up: Editor's Pick