'I'm Perfectly Aware How Ridiculous My Life Is.' Elton John's Autobiography Me Is a Cautionary Tale of Modern Fame

The story of Elton John’s kaleidoscopic, Ozian life has been told many times over: in his own albums and in documentaries and books. The musical film Rocketman, which arrived earlier this year, was an opulent fantasia that traced his astronomical ascent and cocaine-induced crashes: “It’s obviously not all true, but it’s the truth,” John wrote about the film in an essay for the Guardian in May.

But John never wrote a definitive autobiography—that is, until now. Me, which arrives Oct. 15, is a 350-page account of his life that spans from his childhood in Pinner up through his current farewell tour. John isn’t especially known for his verbal prowess—Bernie Taupin takes care of that aspect of the songwriting—but in Me, he proves himself an engrossing, fluid and alarmingly forthcoming writer. “I’m perfectly aware how ridiculous my life is, and perfectly aware of what an arsehole I look like when I lose my temper over nothing,” he writes.

Like John’s songs, Me overflows with whimsical characters, twisted humor, winking self-aggrandizement and stark pathos. True to his spirit, it’s a little silly and over the top, but it’s also an absorbing and unfettered joy.

Because John has been so open about even the most lurid details of his life, the broad strokes of Me are not new. John grew up in a dictatorial household but flashed a keen musicianship from an early age. He wrote “Your Song” in a few minutes in his mother’s kitchen while struggling to make ends meet. At the height of his career, when he became one of the best-selling artists in the world, he became dangerously addicted to cocaine and alcohol. He formed close friendships with John Lennon and Rod Stewart and got into spats with Tina Turner and Madonna. He went on legendary shopping sprees, threw monstrous tantrums and attempted suicide in front of his family.

John is also a notorious gossip, and he fleshes out his well-known story with zany vignettes from behind closed doors—many of which involve some of the biggest stars of the last half century. Lennon once told Elton to ignore Andy Warhol, who was knocking on his hotel room door: “Do you want him coming in here taking photos when you’ve got icicles of coke hanging out of your nose?” On a very official trip to Leningrad, he ended up getting high and having sex with a Russian soldier. A “visibly zonked” Liza Minnelli proposed to him in the basement of Studio 54, while Bob Dylan just couldn’t get the hang of charades: “He was so hopeless, I started throwing oranges at him.”

John describes a lunch with Michael Jackson in the ’90s with much more somberness, writing that Jackson barely ate and disappeared from the table to play video games with an 11-year-old boy. “He was genuinely mentally ill, a disturbing person to be around,“ John writes. “He couldn’t seem to cope with adult company at all.”

If Me has a primary weakness, it’s that John struggles to write about his own accomplishments. His attempts to capture his songwriting process read like recipes: “Bernie writes the words, gives them to me, I read them, play a chord,” he lists. Of his career-making 1970 performance at the Troubadour, he says blandly, “It had gone amazingly well.”

Conversely, he writes about his failures and challenges with a verve and a cackling glee, even when they are dark and painful. He describes his poorly reviewed 1986 album Leather Jackets as having “four legs and a tail and barked if a postman came to the door.” Regarding his premature baldness, he compares himself to Shrek. When recounting his first suicide attempt, in which he stuck his head in an oven but left all the windows open, he writes, “there wasn’t enough carbon monoxide in the room to kill a wasp.”

But John doesn’t just address his failures through flippant punchlines; he also engages in thoughtful self-analysis, putting the blame on both himself and the structures of fame. John writes that when he achieved overnight popularity after the Troubadour performance, he still carried the massive insecurities that came from being a closeted teen in a repressed and broken home: “There was no solitude, no reflection. I had to be with people,” he writes. “I was still the little boy from Pinner Hill Road underneath it all.”

When John started misbehaving due to his inability to deal with the pressure, there was nobody with the confidence or wherewithal to help him mature. His manager and boyfriend John Reid was unfaithful and sometimes vicious; his family was so emotionally detached that they treated a suicide attempt with disdain. Meanwhile, John surrounded himself with yes-men who plied him with cocaine and let him carry on as long as he made it to the next gig. Twenty-four hours after that suicide attempt, for example, John was back onstage at Dodger Stadium. “I was too proud to admit that my life wasn’t perfect,” he writes. “It was pathetic.”

Fame allowed him to buy a ridiculous amount of useless stuff—including an Australian tram and a full-scale T-rex model—and it also enabled his worst impulses. In the ’80s, he was blacking out routinely and unknowingly wreaking havoc across the world. After John shot the now-iconic video for “I’m Still Standing,” he got drunk, punched Reid and smashed up a hotel room with no recollection of his outburst the day after. His recounts the events with a sense of humor and tragedy at once. “No one dared say anything, because of who I was,” John recalls.

John was also suffering from the deaths of several of his friends, including Marc Bolan, Keith Moon and his idol and close collaborator Lennon, who was murdered in 1980. John writes that he became extremely upset when Yoko Ono requested he work on some of Lennon’s unfinished tapes following his death. “Just the thought of it freaked me out,” he writes. The idea of putting my voice on the same record as his—I thought it was horrible.”

Years later, John would be confronted by George Harrison about his cocaine habit, and John just laughed him off. “Sudden fame is a hollow, shallow and dangerous thing, its dark, seductive powers no substitute for true love or real friendship,” he writes. It wasn’t until the death of Ryan White—a teenager who contracted AIDS from a blood transfusion and became a face of the epidemic—and the decision of his then-boyfriend Hugh Williams to go to rehab, that John realized he had hit rock bottom and decided to seek help.

The film Rocketman essentially ends at this point in John’s life—perhaps mercifully, given that the movie already eclipses two hours. But Me shows that John’s last three decades have been almost equally eventful, even if he has mostly mellowed out of his hard-partying ways. He became a leading composer of musicals who wrote the songs for The Lion King animated film and subsequent stage version and Billy Elliott: the Musical—and was even offered a Disney deal that included the possibility of a theme park, but turned it down. He frets about his 1994 version of “Candle in the Wind” following Princess Diana’s death, calling its success on the charts “morbid and unnatural.” He also explains his decision to collaborate with Eminem despite receiving blowback for the rapper’s alleged homophobia: “I thought it was obvious that his lyrics were about adopting a persona—a deliberately repugnant persona at that.”

If Twitter had existed throughout John’s career, he might have been canceled many times over for his wild outbursts and fiercely independent decisions. But it’s John’s willingness to share and reflect on these misdeeds that makes him such a compelling and enduring figure. Me is a cautionary tale of the corrosive impact modern fame can have on a person; it’s also a defiant blueprint for how to weather oppression and scrutiny—how to weather a tornado and land, upright and heels first, on the yellow brick road. 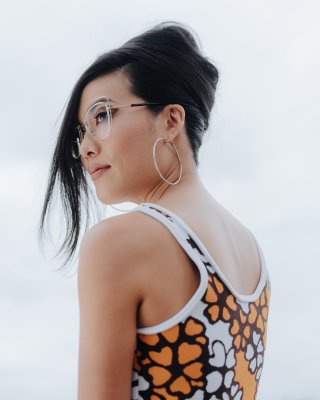 Ali Wong on Motherhood, Grief and Comedy—and the Farts Along the Way
Next Up: Editor's Pick