Review: A Glitter-Fueled Rocketman Blasts Off

When you think about it, the rock’n’roll biopic is about as un-rock’n’roll as you can get, the ultimate in dancing about architecture. You have to sit still, mostly, through the whole thing. And watching a rock star’s life unfold before you hardly matches the livewire thrill of standing in a sweaty pit with dozens, possibly hundreds, of others in the presence of a magnificent human being who calls out to us, one by one and all together, inspiring joy and lust and a zillion other feelings that we haven’t yet invented words for. Who wants to sit down and watch a movie about an art form that makes you wanna shout?

But rock biopics, done right, can jump the synapse between how movies work on us and how music moves us, and Rocketman—the story of shy Reginald Dwight from North London, who would become showman and songman extraordinaire Elton John—sparks that duotone euphoria. Directed by Dexter Fletcher and starring Taron Egerton as the spangled one himself, Rocketman is magnificent and ridiculous, a feathered melanage of clichés and originality, of respectful homage and unrepentant nostalgia. Sometimes it’s comfortingly conventional; other times it’s gloriously off the charts. Even when it doesn’t quite work, it’s just so damn alive, meeting right at the intersection of the human heartbeat and the also-human love for shiny things.

Even people who profess not to love Elton John find they can’t resist him, and they certainly can’t avoid him: Among a string of hits spread throughout a career of nearly 50 years, John’s 1970 “Your Song” is a universal anthem of intimacy, a song that just about everybody knows. “I hope you don’t mind that I put down in words/How wonderful life is while you’re in the world.” Who among us wouldn’t want to be thought of that way by another human being? Or who hasn’t felt that way about someone else, a person whose presence is as precious as the gift of daylight? Rocketman is essentially a movie version of “Your Song,” dedicated to the man who brought the song to the world, a jukebox musical with so much ardent affection poured into it—by the filmmakers and by the actors—that it feels like a love ballad. The picture was, it should be noted, executive-produced by John, so there’s some vanity involved here—but if Elton John can’t be allowed to love himself, what hope is left for this monstrous world? As for moviegoers, I’m sure it’s possible to dislike Rocketman: There’s no avoiding the “I never cared for Elton John” or the “I don’t much like musicals” or the “Rainbows are overrated, don’t you think?” brigade. But I’d argue that resisting Rocketman would expend more energy than it’s worth. If you’re certain you’re going to hate it, just don’t go, and leave the pleasure to the rest of us.

Our first vision of Egerton as John is a blast of glory: Dressed in a winged red devil costume lush with plumage, a pair of curly rams’ horns sprouting from the red satin caplet that hugs his head, he pushes through a set of doors that presumably lead to a stage. But he’s actually headed to a group therapy session, where he plunks himself down, costume and all, and begins the story of his life, accompanied by a litany of his problems. This is Elton John circa the late 1980s, and here’s what he’s up against: He may be one of the world’s richest and most successful rock stars, but he’s also an alcoholic, a cocaine addict and a bulimic. He’s addicted to sex and he has an anger-management problem. He loves prescription painkillers and he can’t stop shopping. He’s alternately agitated and demonically animated as he rattles off his list of flaws and vexations. The ordinary people seated around him in a circle—his costume may be real or imaginary, but even if it’s the former, they’re too polite to acknowledge it—want to help, and they begin asking questions, beginning with the big one: What was his childhood like?

From there, Rocketman takes off like a shot, illustrating each major episode in John’s life with lavish production number. Fletcher prefers the operatic approach over restraint, and his instincts pay off. The real Elton John is now in his 70s, married and semi-retired from touring as he raises his young family; he has been sober for nearly 30 years. The Elton John of Rocketman is both a fantasy and a rendering of a real human being who has seen his share of suffering: Though the movie is largely celebratory, there’s a forceful strain of melancholy running through it. The opening number, a vibrant song-and-dance that takes place in a semi-hallucinatory version of mid-50s London—set to the proclamatory “The Bitch Is Back” —shows a young, willful Elton (played at this point by Matthew Illesley) punching the air, a piano prodigy ready to conquer the world. Later, though, we see him buckling under the disapproval and indifference of his parents (Steven Mackintosh and Bryce Dallas Howard). Their lack of affection for him sets the jagged course of his life. At one point his mother bestows a wicked-witch curse upon him, telling him that he’ll never find anyone who’ll truly love him.

That may be a super-simplistic reduction of real human problems, but in the context of the movie’s vivid stylization, it’s perfectly effective. Rocketman shows us an Elton John searching for love and rarely finding it: The movie outlines an early, unrequited love for Bernie Taupin (played, wonderfully, by Jamie Bell), John’s longtime lyricist. And it plumbs the depths of John’s passionate fixation on his onetime manager John Reid (a deviously sexy Richard Madden), who basically used him as a cash cow.

Through it all, Egerton’s Elton prevails, almost like the heroine of a ’50s Douglas Sirk melodrama: He falls desperately in and out of love; he buys rhinestone-bedazzled sunglasses and out-of-this-world suits; he flounces around his lavish digs in Versace kimonos. As a young shooting star, he plays the Troubadour in Los Angeles—he levitates at the piano, and the audience levitates with him, their platform shoes hovering above the floor like shiny magic horses’ hooves. But success hurts, too: He’ll later attempt suicide by getting messed up on pills and booze and diving into his pool. Fletcher turns the suicide attempt into an underwater fantasia, complete with a hallucination of tiny Elton the child prodigy, seated at a mini-grand piano at the pool’s bottom. This little Elton and his adult counterpart spin out a version of “Rocketman” that gets to the heart of why, when it comes down to it, we all want to keep breathing: “I miss the earth so much, I miss my wife/it’s lonely out in space.” Egerton does his own singing in Rocketman, and he’s affecting and effective: The performance is impersonation as tribute, and it’s filled with tenderness.

The rapturous reception to Rocketman at Cannes, where the film premiered, coupled with the surprise worldwide embrace of last year’s Bohemian Rhapsody, suggests that rock biopics might be satisfying some secret desire that our hypercurated Spotify lists can’t reach. (Bohemian Rhapsody was partially directed by Fletcher, who stepped in after Bryan Singer was fired from the production.) Both Bohemian Rhapsody and Rocketman are set largely in the 1970s, which, to people who weren’t alive at the time, may seem like some lost, dazzling world. The dirty truth is that they’re right: It was dazzling, a time of freedom and exploration that began with the advent of the sexual revolution and ended when AIDS descended. Even if you were too young to have sex during the ‘70s, just listening to the radio was awesome: If you couldn’t afford to buy records or LPs, with a twist of the dial you could find much of what your heart desired, chosen and introduced by disc jockeys with personalities and actual souls. The artists they brought to us were often dazzling and flamboyant, blurring the line between masculine and feminine, and leading us to wonder how much the line mattered in the first place. By the early 1970s, young people were already tired of their hippie predecessors, jawing on about how much acid they dropped or how much no-strings-attached sex they had or what a genius Dylan was before he went electric. In the ’70s, electricity of all kinds was welcome, in the form of satin bomber jackets, or bell-bottoms with glitter stars on them, or makeup on the faces of girls and boys.

No wonder the Freddie Mercury of Bohemian Rhapsody and the Elton John of Rocketman are the men of the moment, the very people we seem to want to hear from now. Both were masters of self-invention who celebrated love and pleasure even when masking their own heartbreak. The question asked, and answered, by Rocketman isn’t Why should we care about Elton John? but Why wouldn’t we want just a bit of his lightning right now? Technology has made our lives easier, but the tradeoff is that it now rules our lives. Work and play are merged in unholy ways. The man in the gray flannel suit, working hard for the life he wants, hasn’t disappeared; he’s now the man—or woman—in the gray felt Allbirds, putting in long hours just to pay off student loans. And here comes a movie with Elton John in a feathered suit, a fabulous and rare songbird at the piano, presenting us with a vision of romance and vitality and wild, polychrome beauty. This, too, can be your song. And you can tell everybody. 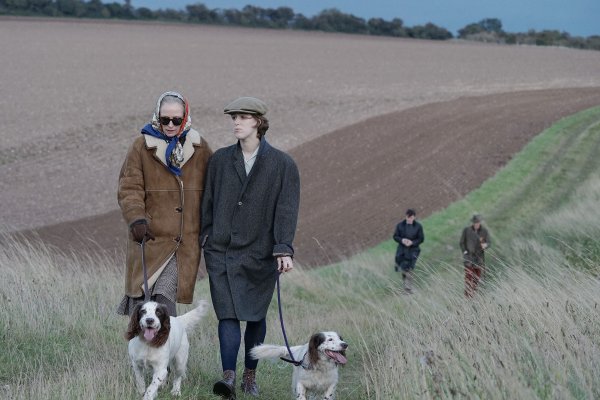 The Souvenir Is a Haunting Portrait of Young Love
Next Up: Editor's Pick