By John Walcott and Brian Bennett

As new examples emerge of President Donald Trump taking aim at political rivals in his conversations with foreign leaders, worried national security officials are warning that when it comes to some traditional threats from abroad, the President is distracted.

In a briefing on Tuesday Oct. 1, Trump showed no interest when aides detailed North Korea’s new efforts to develop missiles that can be fired from a submarine, two U.S. officials who participated in the White House briefing tell TIME. Trump decided talks with North Korea should continue despite that country’s evident intention to develop the new military capability, the two officials say.

North Korea is testing underwater missiles that could eventually give it the ability to launch a retaliatory nuclear strike from a submarine if it is attacked. Military officials assess that strategic advance will pose a significant new threat that requires more military resources to defend against, the officials told Trump during the meeting, which included Trump’s new National Security Advisor, Robert O’Brien.

But the President “didn’t care” and “showed no interest,” one of the officials says, and decided the tests should not derail talks between U.S. and North Korean officials scheduled for the coming days. Those talks are designed to pave the way for a fourth face-to-face meeting between Trump and North Korea’s autocratic leader Kim Jong-Un.

Officials have put together incentives Trump can offer Kim in exchange for beginning to dismantle his nuclear program. Trump is prepared to offer Kim a three-year suspension of United Nations sanctions on textile and coal exports if Pyongyang agrees to dismantle its main nuclear facility at Yongbyon and halt its production of highly enriched uranium, said the two U.S. officials. If the United Nations is not willing to follow Trump’s lead, one of the officials said, the U.S. could temporarily halt its enforcement of those sanctions, the officials said. The terms of the offer were first reported by Vox.

Recently, he has gone a step further. Last month, he asked the Australian Prime Minister to help investigate the origins of the Russia probe and on July 25, he asked Ukraine’s president to investigate his political rival Democratic presidential candidate Joe Biden. During a call with China’s President Xi Jinping in June, Trump brought up Biden’s political prospects, as well as those of Sen. Elizabeth Warren, according to a CNN report.

White House Press Secretary Stephanie Grisham confirmed Trump had been briefed about North Korea, but said the description of him showing no interest in the threat is “completely wrong.” “Of course he has been briefed, that has always been the case and will not change. Everything else you have below is completely wrong and I’m fine going on the record with that,” Grisham wrote in an emailed response to questions from TIME.

Trump’s Oct. 1 briefing on North Korea came on a busy news day that saw Democrats push forward with their impeachment inquiry about Trump’s request for Ukraine’s help digging into Biden.

As that political scandal continued to consume Trump’s attention, North Korea took additional steps. On Oct. 2, the day after Trump’s North Korea briefing, Pyongyang launched a ballistic missile from a submerged barge that served as an underwater platform. The missile flew to an altitude of 575 miles and landed 280 miles from the launch site, according to U.S. intelligence officials, who estimate the solid fuel rocket, if it is operational, could have a range as long as 1,500 miles.

U.S. intelligence officials have concluded that the missile, called the Pukguksong-3, is designed to be fired from a new submarine that Pyongyang is developing, one official said, speaking on the condition of anonymity. “Together, assuming they prove to be at least somewhat reliable, [these] two weapons would give North Korea a significant new second strike capability that would potentially raise the cost of any attack on [North Korea],” despite the fact that the new boat is diesel-electric and relatively easy to locate and track, the official said.

Military and intelligence spokespeople contacted by TIME about these and other details for this story declined to comment on the record.

In all, North Korea has launched 11 missiles since Trump and Kim met last February in the Demilitarized Zone that separates North and South Korea, and the fact that the President has continued to pursue negotiations and ignored Pyongyang’s military progress has troubled both U.S. officials and key allies such as South Korea and Japan, according to U.S., South Korean, and Japanese officials.

Even as North Korea is making military advancements, Trump is developing the outlines of a diplomatic deal with Kim. The White House would not comment on the details of the deal. “As the President has said, our goal is the final, fully verified denuclearization of the North Korea, as agreed to by Chairman Kim Jong Un,” said a senior administration official. “Our hope is that North Korea will choose a path that will allow them to access their tremendous economic potential. We won’t comment any further on ongoing negotiations,” the official said.

Both U.S. officials and one intelligence official said they are troubled by some aspects of the administration’s approach.

First, said the intelligence official, there are an estimated 200 nuclear facilities in the Yongbyon complex, verifying their closure is impossible without on-site inspections that the North has always refused to accept, and the North is believed to have other, hidden enrichment facilities. In addition, all three officials said, the proposal would give the North three more years to improve its arsenal, which includes chemical and biological weapons.

Two of the officials feel that the administration’s push to resume negotiations, coming as it does after the departure of former national security advisor John Bolton, a North Korea hawk, is likely to be interpreted by the North Koreans as a sign of weakness and an indication that Trump may be willing to abandon his demand that Pyongyang denuclearize completely and, instead, agree to a timetable for negotiations in order to get another summit with Kim.

“Already this year, the North has violated U.N. resolutions 21 times and the administration has done nothing,” said one American official. “How can that be interpreted as anything but a sign of weakness?” 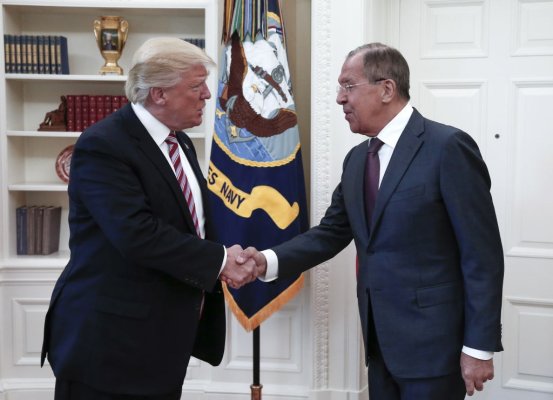 The U.S. Reportedly Extracted a High-Level Spy From Russia in 2017 Amid Concerns of Mishandled Intelligence
Next Up: Editor's Pick