Police in Texas have released body camera footage from the two officers who, in an August incident, arrested a black man and walked him four blocks in handcuffs attached to a rope they held while they rode horses. The incident sparked national outrage and was widely criticized as racist.

The Galveston Police Department released videos of Donald Neely’s Aug. 3rd arrest on Wednesday taken by both officers’ body cameras after calls from Neely’s family and protestors for the footage to be made public.

In the videos, officers Patrick Brosch and Amanda Smith are seen arresting 43-year-old Neely for criminal trespass, as he appears to be lying down outside a building in downtown Galveston. “You were asked by the property manager not to come back here,” Brosch says, alleging that Neely had already been arrested “multiple times” for trespass at the location.

The officers then tie a rope around Neely’s handcuffs, and tell him to walk ahead of them as they rode their horses. They led Neely to a parking lot where their horse trailer and truck were parked. The footage then shows him being transported to jail in a police squad car; he was later charged with misdemeanor criminal trespass and released on bond.

As the officers pass through a more populated area, they appear to consider the optics of their arrest. “This is going to look really bad,” Brosch repeats throughout the video.

At one point, Brosch also asks Smith if she wants to divert to a street with less traffic. “Yeah, I want less eyesight,” Smith replies.

After photos of the incident began to circulate on social media in August, Galveston police chief Vernon L. Hale III apologized for the officers’ actions in a press statement, while arguing that their arrest was considered acceptable procedure.

“First and foremost I must apologize to Mister Neely for this unnecessary embarrassment,” Hale said. “My officers did not have any malicious intent at the time of the arrest, but we have immediately changed [our] policy to prevent the use of this technique and will review all mounted training and procedures for more appropriate methods.”

The Texas Rangers, a division of the state’s Department of Public Safety, conducted an inquiry into the officers’ actions. They found “there was nothing that warranted a criminal investigation,” according to a statement from the office.

On Oct. 2nd, the Galveston Police Department said that they had received a second administrative report into the incident from the Galveston County Sheriff’s Office. “I am studying the report now and will use its findings to make decisions in the near future about the next steps for the department,” Chief Hale said in a statement released by the city.

Neither of the officers involved have commented on the incident, though the Houston Chronicle reports they have since been placed on “modified duty.” Local news station KHOU11 also reports that Galveston’s mounted patrol program is “not currently in use.” (TIME has reached out to the Galveston Police Department with a request for comment.)

“Due to Civil Service rules, any discipline would be at the sole discretion of Chief Hale,” Galveston city manager Brian Maxwell added in the city’s statement. “The City supports the chief in any actions he deems to be appropriate; however, if the investigation identifies deficiencies in department policies or practices those will be addressed directly with the Chief.”

A march was held in Galveston on Sept. 15, during which Neely’s family and their attorneys had called for the police to release the body camera footage. “We are here, brothers and sisters, for a teachable moment for America,” prominent civil rights attorney Benjamin Crump said at the protest. “We are here because what has been seen cannot be unseen.”

Neely spoke with the Houston Chronicle on Oct. 4th and said that while he did not feel embarrassed during the arrest, he feels differently now that he has seen video footage.

“It came back and hurt me because I did not know I was getting video recorded by the public. Now I feel embarrassed,” Neely said.

According to the Chronicle, Neely has been diagnosed with paranoid schizophrenia, and he told them that he hopes this incident with lead to a conversation on how the police deal with mentally ill suspects.

“It’s a title,” Neely said of the stigma often associated with the illness. “It’s not authentic. It’s not going to stick. Every time they label me with a mental illness or as a paranoid schizophrenic, it rolls straight off.”

According to the Chronicle, Neely’s family had been unsuccessful in trying to get him to come home but since this incident things have turned around. He entered a Houston treatment facility for three weeks, moved in with his sister and is taking daily medication. 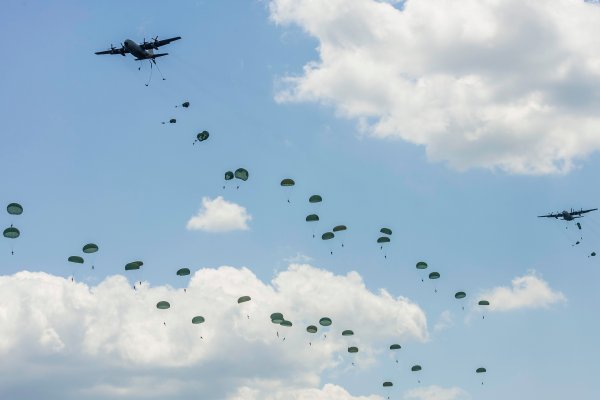 At Least 19 Paratroopers Hurt After Jump Mishap
Next Up: Editor's Pick