Two Texas police officers who were photographed riding on horses while leading a handcuffed man down a street will not face criminal charges, authorities said.

The Texas Rangers, a division of the state’s Department of Public Safety, had conducted an inquiry into the officers’ actions and found “there was nothing that warranted a criminal investigation,” according to a statement from the office.

“The Texas Rangers conducted an inquiry into this matter, which has since been completed,” read a statement from the department. “The Rangers subsequently conferred with the Galveston Co. District Attorney’s Office, which determined that there was nothing that warranted a criminal investigation.”

A photo of the officers, who are white, riding on horsebacks and leading a handcuffed black man by a rope sparked widespread outrage when they circulated widely on social media earlier in August. The handcuffs were tied to a rope held by one of the officers (or, as a police statement puts it, “a line clipped to the handcuffs”).

Chief Vernon L. Hale III of the Galveston police department said the officers “showed poor judgment,” but argued that they did not have any ill intentions. Neither of the officers involved in the incident has commented publicly.

According to a statement released to the press, the two officers arrested Donald Neely for trespassing on Saturday afternoon at an address in downtown Galveston. While on horseback, the two officers walked Neely eight blocks from this point to a “staging point” for their mounted police unit. Hale’s statement said that this practice is considered acceptable in certain situations but in this instance it was not used correctly. It’s unclear if the officers will face disciplinary actions.

Asked to clarify situations in which the department does view its mounted officers perp-walking detained individuals as “acceptable,” a Galveston police spokesperson referred TIME back to their statement.

“First and foremost I must apologize to Mister Neely for this unnecessary embarrassment,” Hale said. “My officers did not have any malicious intent at the time of the arrest, but we have immediately changed the policy to prevent the use of this technique and will review all mounted training and procedures for more appropriate methods.”

James Douglas, the president of the NAACP chapter in Houston said that the officers should face disciplinary actions.

“That is a total disrespect for people of color. It doesn’t matter if its policy or not,” Douglas tells TIME. “This [was in response to] a misdemeanor trespass and the man required a lot more respect than what was shown by the police officers. This is not 1819, this is 2019.”

Leon Phillips, the president of the Galveston Coalition for Justice, called for the two officers to be fired, according to the New York Times. “If it was a white man, he wouldn’t have been treated that way,” Phillips said. “I guarantee there’s nothing in their rules that you can put a leash on a guy while you ride down the street on a horse.”

Neely was later released on bond. 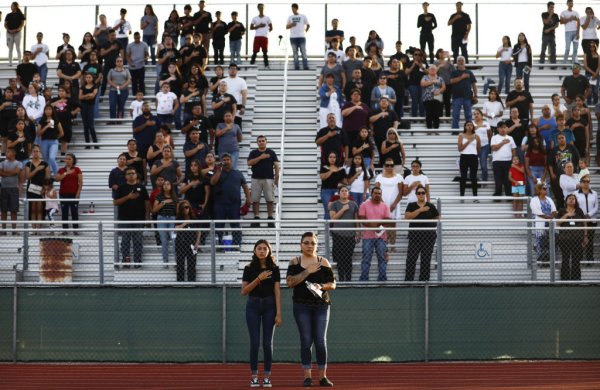 'He Was Just a Kid.' El Paso School Mourns Shooting Victim as Teachers Console Students Citywide
Next Up: Editor's Pick