A New Study Suggests Tainted Talcum Powder Can Cause a Rare Cancer. Here's How That Could Play Out in the Courtroom

A new 33-patient case study published in the Journal of Occupational and Environmental Medicine provides some of the strongest proof yet that exposure to asbestos-tainted talcum powder may cause malignant mesothelioma, a rare and deadly cancer that affects tissues lining internal organs.

This isn’t only an important scientific discovery—it could also give new ammunition to plaintiffs in the thousands of cases brought against brands selling talcum-powder-based products alleged to cause cancer, like Johnson & Johnson’s Baby Powder.

“It’s very, very hard, in general, to prove exactly what caused your specific case of disease,” says Steve Gold, a professor at Rutgers Law School who specializes in toxic and hazardous substances. “If a credible physician and researcher is willing to testify and has published that these individual cancers appear to be caused by asbestos exposure from talcum powder, that’s evidence that is usually not available to plaintiffs. That’s very powerful.”

Asbestos is a group of naturally occurring fibrous minerals that’s considered a human carcinogen by the World Health Organization and other public health groups. It is linked to mesothelioma, ovarian cancer and lung cancer. Among other places, it’s found in building supplies, insulation, some car parts—and the talc from which talcum powder is made. (Talc also turns up in cosmetics like blush and facial makeup.) Since the 1970s, manufacturers have pledged to use talc that is free from detectable levels of asbestos, but there is still little regulation over the cosmetic industry, and concerns about asbestos contamination persist. A bombshell 2018 Reuters report also found that J&J knew for decades that some of its Baby Powder was tainted by asbestos, but did not report that information publicly or to federal regulators.

J&J has also for years been under fire in the courtroom. In March, for example, a California jury awarded more than $29 million to a woman who claimed talcum-powder-based J&J products contributed to her mesothelioma. The year before, a jury ordered J&J to pay more than $4 billion in damages to a group of women who claimed its products caused them to develop ovarian cancer. And in 2016, the consumer products giant was ordered to pay $55 million to a woman who said Baby Powder contributed to her ovarian cancer.

J&J has refuted and, in many cases, appealed those decisions, citing conflicting evidence on whether talcum powder can cause cancer. In a statement provided to TIME after the new study’s publication, the company maintained that Baby Powder is safe.

“We sympathize with anyone suffering from cancer, and we understand patients and their families are seeking answers. The facts are clear — Johnson’s Baby Powder is safe, does not contain asbestos nor does it cause cancer, as reflected in more than 40 years of scientific evidence,” the statement reads. “There have also been many jury verdicts in favor of the company on these issues, including two in the last week.” (On Oct. 9 and Oct. 11, separate California juries sided with J&J in cases alleging that its products caused mesothelioma. On Oct. 15, a Missouri appeals court overturned a $110 million verdict against the company, handed down in 2017 after a woman claimed J&J’s products caused her ovarian cancer.)

Peter Bicks, outside counsel for J&J on talc litigation, also noted that study co-author Jacqueline Moline, a professor of occupational medicine, epidemiology and prevention at the Feinstein Institutes for Medical Research at Northwell Health, has served as a paid witness in asbestos lawsuits and in the study drew on cases referred to her by plaintiffs’ attorneys.

Moline emphasized the study’s importance. “This is the first time that anyone has said, ‘Let me look at all these cases, put it all together and identify the ones where [talc] is the sole exposure,'” Moline says. “People aren’t even aware that cosmetic talcum powder might have had asbestos in it.”

In the paper, Moline and her colleagues present case studies of 33 people, mostly women, who were confirmed to have malignant mesothelioma, and whose only substantial exposure to asbestos was through the use of talcum powder—theoretically ruling out other causes of the disease, since asbestos exposure is the primary risk factor for malignant mesothelioma. (All of the people profiled in the study gave depositions as part of lawsuits related to cosmetic talc.) The authors broke out in particular detail the cases of six individuals, all of whom underwent tissue testing that showed fibers consistent with the type of asbestos found in cosmetic talc, but not in things like building supplies and insulation. Some of these people used products containing talcum powder daily for decades.

“Everything points to cosmetic talc being the cause,” Moline says.

Dr. Philip Landrigan, director of Boston College’s Program in Global Public Health and the Common Good, calls the evidence “compelling” and “credible,” adding that it builds upon decades of research on asbestos and mesothelioma. “The connection has been something that has been of concern for several decades,” he says. (Landrigan has studied asbestos and knows Moline professionally, but was not involved in the new study.)

From a scientific perspective, 33 case studies is compelling. But Gold cautions that they may be less persuasive in the courtroom.

“In general, courts have been somewhat skeptical of case studies as proof of causation,” Gold says, since it can be difficult to apply the details of one person’s case to a larger patient population. The study “ought to be [seen as] basically a brick in a wall. It’s nowhere near a wall—but it’s a brick.”

On one hand, Gold says, linking mesothelioma tumors to asbestos in talc offers compelling causal evidence. But on the other hand, it may open up a new counterargument to defendants. “Will a company like Johnson & Johnson argue that…in cases where those fibers are not found in the tissue samples, that means asbestos in talc did not cause mesothelioma?” he asks. “I don’t think that inference is supportable, but I can imagine that argument being made.”

Regardless of what happens in court, Moline says she hopes the study raises awareness for those who have used cosmetic talc in the past, and those who continue to do so to this day.

“Anything you use on your body or in your body, you want to be careful [about],” Moline says. “I would tell people that there is no regulation for talc, and that if there is a safer alternative then I would advise them to do that. I would not recommend people use talcum powder.”

On Oct. 18, J&J announced a voluntary recall of a single lot of its Baby Power, after the Food and Drug Administration found “sub-trace levels” of asbestos contamination in one bottle of powder purchased online. In a company statement, J&J said the recall was out of “an abundance of caution,” and maintained that its talc is safe and free of asbestos. It also said it cannot yet confirm whether the tainted bottle had been cross-contaminated, tampered with or was counterfeit.

The recalled lot is #22318RB, and was produced and shipped in the U.S. last year. J&J advises anyone who purchased a bottle produced in this lot to discontinue use. 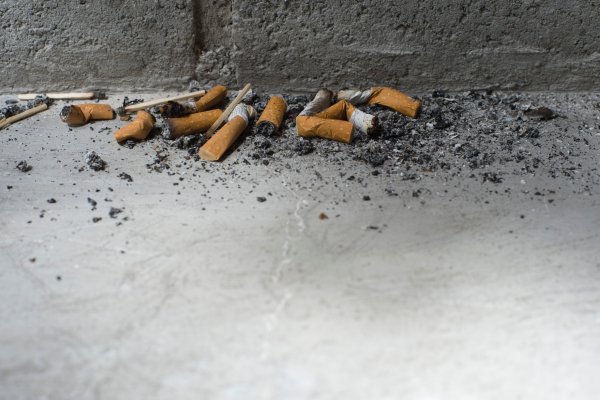 Researchers Went Through High Schoolers' Trash to Find Out Which Tobacco Products They're Using. Here's What They Found
Next Up: Editor's Pick