What It's Like to Give Birth after a Uterus Transplant

This month, Kayla and Lance Edwards welcomed their daughter Indy Pearl Edwards into the world, and became the fourth couple to have a child through the uterus transplant program at Baylor Scott & White Health’s Baylor University Medical Center.

The couple would have had a great love story even without those extraordinary circumstances. They attended elementary school together in Vancouver, Wash., lost touch, and then reconnected through social media more than a decade later. After months of chatting through the game “Words with Friends,” they finally went on a date in January 2013 and got engaged about a year later.

Kayla always knew she wanted a family, but starting her own wasn’t easy. When she was 16 years old, she was diagnosed with Mayer-Rokitansky-Küster-Hauser (MRKH) syndrome, a congenital disorder that causes girls to be born either without or with an underdeveloped uterus. She stayed active in MRKH communities online, and eventually learned about a new option for women like her: uterus donation and transplantation. The first-ever birth from a transplanted uterus happened in Sweden in 2014, the year the couple married. Baylor, one of the first U.S. institutions to perform the procedure, opened its clinical trial two years later, prompting Kayla, 28, and Lance, 27, to move to Dallas.

This is the couple’s story, lightly edited and condensed for clarity.

TIME: If you can put it into words, how are you feeling right now?

Kayla: It’s so rewarding to finally have her. We tried for so long, and there were some days when we thought it would never happen—especially being diagnosed with MRKH. To finally hold her and be like, ‘Oh my gosh, she’s here and she’s ours,’ has just been amazing. It’s just so special and worth it.

Lance: The three years it took to get to where we are now felt like it was such a long journey, but everything was totally worth it. I’m just soaking in every minute that I can. It’s like an out-of-body experience, to be honest.

TIME: What was the process like, from transplantation to birth?

Kayla: It’s definitely been a long process—a little longer than some of the other girls in the program, just because we’ve had some hiccups. We moved in 2016, which is when were accepted into the trial. We had sold our house. We left everything we knew; we didn’t know anybody in Texas. Then when we got here, my donor actually fell through. I was a difficult blood match, so for the next year we waited to be matched again. That was really hard, to just sit here in Dallas be like, ‘Is this going to happen? Did we make the right choice?’

I was finally transplanted with a different donor’s uterus in 2017, and about three months after surgery, [the] doctors decided to do an embryo transfer. It didn’t work. They did another embryo transfer, and it didn’t work again. We did an IVF cycle and we got no eggs; my body didn’t respond to the medication. We had to go through another IVF cycle, and we only got two embryos. Then we did another embryo transfer, and it didn’t work. On the fourth transfer, our last embryo, they tried a natural cycle, which means they go off my natural menstrual cycle instead of mimicking it with medicine. It worked—which was really cool for a transplanted uterus, that it synched up to my body so well. My body knows what to do. I couldn’t believe when they told me that I was pregnant. It was surreal.

Lance: I was getting to the point where I was like, ‘You know, maybe this isn’t the right thing for us to do,’ between the delays and the surgery and all the failed IVF cycles and watching my wife deal with the medications and hospital visits. Getting that phone call, it’s just like, ‘What? Are you kidding me? Did they triple check?’ Then it’s the worry of, ‘Is the pregnancy going to go well? Are we going to have a miscarriage?’ It’s a constant worry, almost from day one to the birth. But once you hold that baby and hear that cry, all of that goes out the window.

TIME: Was it strange to know your uterus came from a donor?

Kayla: Really, it’s been functioning so okay for me that I haven’t really thought of it as someone else’s. It’s just in there! You don’t really feel like, ‘Oh, I have a uterus today.’ Really, I’ve just been thankful for my donor. I really haven’t felt different, like there’s something foreign in me. This is what my body was intended to do, and I’m so thankful for this opportunity.

TIME: Have you met your donor?

Kayla: We have written letters to each other back and forth. She gave me a children’s book on the day Indy was born and wrote a sweet note in it. It made me cry.

Lance: I hope we can all meet the donor someday. We’re all so thankful. You can’t measure the amount of love that she has shown toward us, and the compassion. One day I just want to give her a big hug and tell her ‘thank you’ from the bottom of my heart.

TIME: How will you share this with Indy someday?

Lance: Definitely a lot of scrapbooks, a lot of news articles, videos and just showing our love.

TIME: Why did you choose to be so open with your story, when many couples who go through this experience are not?

Kayla: I’ve been open since the day we left Vancouver. I just hope our story gives people inspiration and hope. It is a taboo subject, and I want people to know there’s tons of support out there and people going through things with them. That has always has empowered me to share my story—so it could help somebody else. 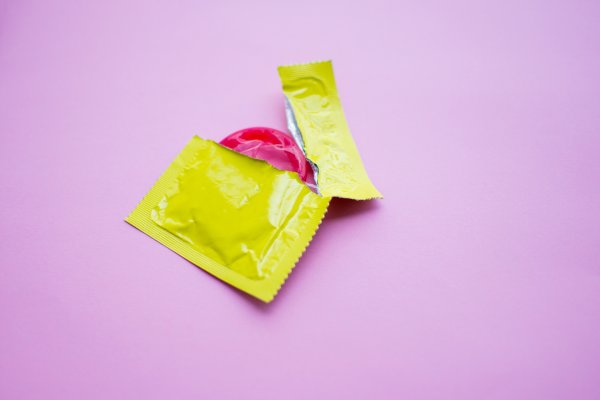 These STDs Are the Most Common Infectious Diseases Reported to the CDC
Next Up: Editor's Pick