I Love Being a Mom. So I Donated My Uterus to Help Someone Else Become One

This spring, 31-year-old Heather Bankos donated her uterus through a research program at Baylor University Medical Center in Dallas, becoming about the 70th woman to do so worldwide. Bankos does not know the identity of her recipient, but most women in Baylor’s program have Mayer-Rokitansky-Küster-Hauser syndrome, a congenital condition that occurs in females, leading to an underdeveloped or absent uterus.

Bankos, who lives in Pennsylvania and has three kids of her own (ages 8, 6 and 3), explains why she wanted to donate her uterus, and what she hopes it brings to its recipient. —Jamie Ducharme, TIME staff writer

I absolutely loved being pregnant with my kids. I felt amazing, I felt really comfortable in my body and I loved having this secret bond with my baby. I’m one of those people who makes people who don’t like being pregnant say, ‘I don’t know how you do this.’

I’m a nurse in a neonatal intensive care unit, and I see heartache and what these parents go through when they lose their babies. I love being a mom, but I knew I was done having kids. If there was somebody out there who needed me to help them experience that, I was definitely willing to do it. Initially I was actually thinking about surrogacy.

Then a little more than a year ago, an article from TIME, about the first baby born through Baylor’s uterus transplant program, was floating around the internet. I was pretty amazed by that. I was still thinking about surrogacy at the time, but I contacted an organ donation organization and they got me in contact with Baylor. I talked to my husband. He was like, ‘That’s crazy, but I will support you.’

I got a call from Baylor in April of last year, then I didn’t really hear from them for a couple months. In the meantime, I got a new job as a transport nurse, flying in helicopters and airplanes, and I decided to take surrogacy off the table. I didn’t want to risk someone else’s child, and I’m not sure many parents would have wanted me to.

Baylor contacted me again in September and asked if I could come down for the pre-screening, which involved an MRI, a CT scan, an x-ray, an EKG, a ton of blood work, urine testing and a psychological evaluation. It was a lot, but I never really questioned my decision. I just knew I wanted to help somebody and I was going to do it one way or another.

They contacted me in February saying they had a recipient and I was super excited. The day before the surgery this spring, I was smiling from ear to ear. I was really excited to finally be able to do something for someone else. My recipient was super sweet in the hospital. She sent me a couple of cards and a gift, and I sent her a couple cards back. I did mention in there that I would like to meet her someday, but I can’t at least until she’s given birth.

The surgery was about 11 hours, using a surgical robot. I was the second donor at Baylor to have robotic surgery. They took my fallopian tubes and uterus, but I kept my ovaries, so I’ll still have hormones and won’t go through early menopause. [Editor’s note: A representative from Baylor confirmed that the recipient’s surgery went well, and her new uterus is functioning as expected.]

I came out of recovery okay, but that night I had a rough time. A couple days later, I had a lot of excruciating pain. They took me for a CT scan just to make sure everything was okay. It was a little scary, but in the long run, it was fine. I had to go back in and have another stent placed, and I felt much, much better afterward. After that, I was able to start recovering properly and started feeling back to normal and not in so much pain. I took 12 weeks off from work; that was their recommendation.

It’s an incredible thing, and I’m really excited to have been part of it. Every woman that wants children should be able to have them. I just really feel like it was my purpose to help somebody, whether somebody I know or a complete stranger. I’d do it again in a heartbeat. 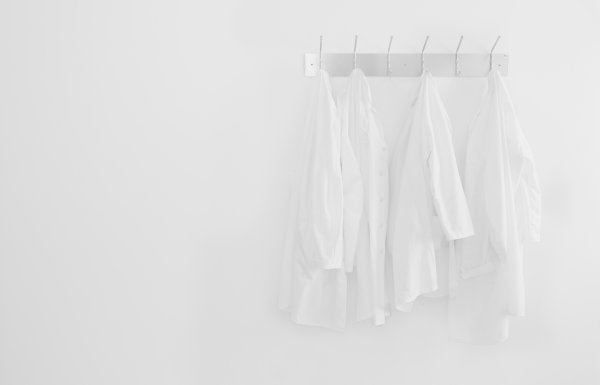 Physician Burnout Costs the U.S. Billions Each Year
Next Up: Editor's Pick