Protesters with the Extinction Rebellion movement parked an old fire engine outside the Treasury Building to spray 1,800 liters of red-colored water over the 100-year-old building.

The protest, which started at around 10am on Oct. 3, wanted to highlight the lack of action the U.K. government has shown in addressing climate change, an Extinction Rebellion spokesperson told TIME.

Demonstrators were holding banners outside the building, demanding that the U.K. government “Stop Funding Climate Death”.

Meanwhile, protesters stood on top of the fire engine and used a hose to spray the fake blood onto the front of the Treasury Building for several seconds, leaving red marks above the door. But they quickly lost control of the high-powered water jet and the liquid was instead sprayed across the road and pavement.

The fake blood is made from a concoction of beetroot powder, golden syrup, water and cornflower, Extinction Rebellion told TIME. The mixture can be washed off the building, but faded marks of red remain on the building for now.

In a statement, Extinction Rebellion said: “The protest is being held to highlight the inconsistency between the U.K. Government’s insistence that the UK is a world leader in tackling climate breakdown, while pouring vast sums of money into fossil exploration and carbon-intensive projects.”

A total of four people — three men and one woman — have been arrested on suspicion of criminal damage, a Metropolitan Police spokesperson said.

Among the arrested activists is Phil Kingston, a 83-year-old retired Lecturer in Social Work and grandfather of four. This is the sixth time he has been arrested as part of climate protests. Kingston said in a statement: “I fight with all my being for my four grandchildren in this situation of existential danger…I come to the Treasury to challenge these practices and to demand radical change in them.”

Another arrested activist, retired doctor Diana Warner, added: “The situation around global heating and environmental destruction is so urgent that I am risking imprisonment.”

“I consider what I am doing now with Extinction Rebellion to be more important than any other work I have done as a doctor and mother.”

The protests outside The Treasury building today is part of a build up towards the International Rebellion — a global protest in more than 60 cities starting on Oct. 7. 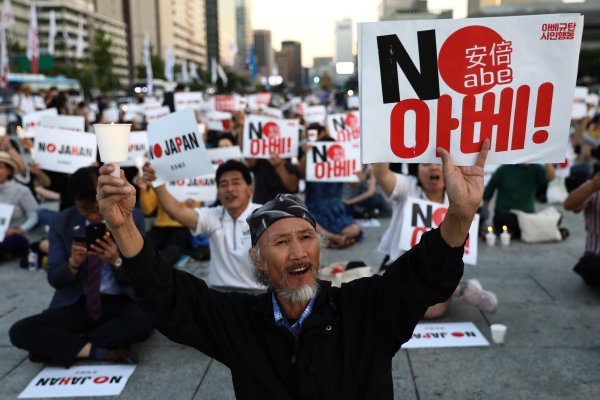 Why the Japan-South Korea Trade War Is Worrying for the World
Next Up: Editor's Pick