The Danger of Donald Trump’s Ignorance

Among many other challenges unique to this moment in our history, the impeachment inquiry confirms the risk of focusing on the President’s flagrant lies rather than his true beliefs.

Yes, fact checkers have run out of adjectives to describe his inflation of his own economic performance (not the best in history), his construction of a fantasy along the border (there’s no new wall yet), his exaggeration of his tax cut (not the biggest) and too many other demonstrably false statements of fact to count.

But as we enter the next chapter—far too soon to call it the last—of this presidency, it’s important to be more precise in the language we use. The Ukraine scandal shows something even more alarming than a president who lies.

In his call with Ukrainian President Volodymyr Zelensky, what reason would Trump have for raising a discredited fever swamp conspiracy theory about Crowdstrike and the DNC server being stashed somewhere in Ukraine unless he actually believed this to be true and worth pursuing? He had every reason to think this was a private call; he wasn’t shaping public opinion, rallying his base, tossing a new shiny object in front of reporters to chase. His hunger for dirt on Hunter Biden sounds like familiar, amoral, gutter politics. But he also pressured a foreign leader to enter his alternative universe. This is altogether different.

Democratic politics has forever rewarded candidates who are colorful, ebullient, and at times gymnastic in their relationship with facts. But it is not just President Trump’s lying that has set a whole new precedent. The “truths” he tells frighten me more. These are the things he clearly believes to be true despite all evidence to the contrary, whether it is who actually pays the price for tariffs, or whether a given public servant deserves to be prosecuted for treason. When he describes his thuggish conversation with Zelensky as “perfect” and appears shocked that even some of his allies don’t agree, he proves better than any prosecutor could his ignorance of his constitutional oath or even basic rules of decency.

Ignorance is different than deceit and sometimes more dangerous. For all the evident rapport between President Trump and Russian President Putin, their instincts for dissembling have similar expression but I suspect different motives.

Putin has raised deceit to a performance art. Yale Historian Timothy Snyder, whose book On Tyranny is back atop the bestseller list for a reason, argued in The Road to Unfreedom that Putin’s mission is to destroy the very ideas of fact and truth: “If citizens doubt everything, they cannot see alternative models beyond Russia’s borders, cannot carry out sensible discussions about reform, and cannot trust one another enough to organize for political change. A plausible future requires a factual present.” So when Russian forces invaded Ukraine in 2014, Putin lied delightedly about the basic facts. “Putin’s aim was not to fool Ukrainians,” Snyder argued, “but to create a bond of willing ignorance with Russians, who were meant to understand that Putin was lying but to believe him anyway.”

Willing ignorance might be a generous way to describe President Trump’s worldview. Given of how much of his day is spent consuming media, and producing it in the form of his Twitter feed, his curiosity and consumption habits have become a matter of national security. The Russians don’t need spies in the White House if their disinformation campaigns find a host in the Oval Office.

Of all the gambles in electing the most politically inexperienced candidate ever to the highest elected office in the world, the danger of ignorance may prove the greatest. What Donald Trump “knows” derives from the seamy worlds of real estate, casinos and reality TV, and it is his infected worldview, paired with his distant acquaintance with actual truth, that is now the most frightening characteristic of this presidency. 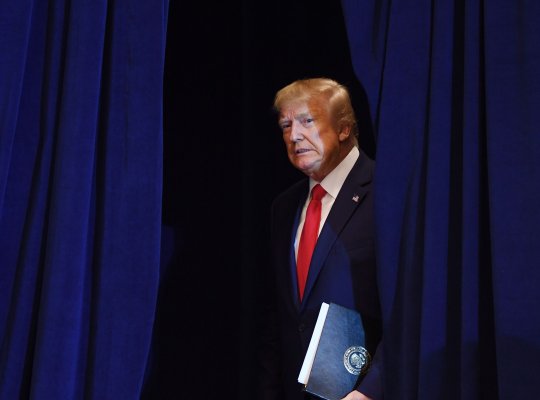 How Trump Triggered an Unprecedented Fight
Next Up: Editor's Pick