The Sleep Habits That Can Improve Your Grades, According to a New Study

Jeffrey Grossman set out to study how exercise affects college students’ grades. What he found, instead, offers uniquely specific insight into the impact sleep has on academic performance.

Grossman, a professor of materials science and engineering at the Massachusetts Institute of Technology (MIT), asked 100 of his Introduction to Solid State Chemistry students to wear a Fitbit activity tracker for an entire semester. (Eighty-eight did.) He also worked with colleagues in MIT’s athletic department to create an exercise class—incorporating videos from his “hero,” “Insanity” creator Shaun T—that 22 of the students took throughout the semester. Grossman expected these students to perform better academically than their classmates—but after months of poring over the data, he says, an association just wasn’t there.

“It was disappointing, to be honest,” Grossman says. But “after going through this, we took a little break and said, ‘Wait a second. We don’t just have the active data; we have the inactive data.'” Grossman and his colleagues realized they had something rare: a relatively large amount of objective data on sleep duration, quality and consistency from a diverse group of people actively engaged in a learning environment. They ran new analyses, and started to see patterns unfolding.

Some of their findings—like the idea that getting more and higher quality sleep is associated with higher grades—are hardly shocking. But other conclusions go deeper than general sleep recommendations.

Among the most important findings, Grossman says, was that sleep consistency appears to be just as important as sleep duration and quality when it comes to academic performance. Most doctors recommend keeping sleep and rise times fairly constant throughout the week, to avoid disturbing the circadian rhythms that regulate wakefulness. Grossman’s data suggest that a uniform pattern may also help the brain process and cement new information, potentially resulting in higher grades.

“If you can just get the same amount each night, compared to someone who averages the same amount as you but gets less consistent sleep, you’re going to do better,” he says. “I think it has to do with how we rely on sleep to process information that we learn that day. When that processing is more variable, I think we just aren’t going to be as consistent.”

Further validating that theory, Grossman and his colleagues examined sleep data collected on the nights before tests and quizzes, and found that night-before duration had little bearing on students’ grades. “You can sleep a ton the night before or you can sleep very little the night before, and it doesn’t really have an [impact] on your performance,” he says. “What has an [impact] is [sleep during] the week before.”

The researchers also found that bedtime doesn’t matter—up to a point. Students in the study had an average bedtime around 2 a.m., and averaged seven hours of sleep per night, in keeping with standard sleep-length recommendations. As long as students turned in by roughly 2 a.m., the researchers found, sleep duration appeared to be the most important predictor of academic performance. But going to bed later than 2 a.m., Grossman says, was associated with lower class scores, even if students got as much sleep than those who went to bed earlier.

Grossman isn’t totally sure why that’s the case, but he has a few theories. “Maybe after that point the seven hours takes you to a time in the morning where you can no longer get the same type of sleep; maybe too many other things are going on,” he says. “It could just be that going to bed that late actually has an impact on the processing that your brain does when it’s consolidating memory.”

All told, Grossman found that sleep habits could explain about 25% of a student’s grade in his class. Rest was impactful enough, Grossman says, that it appeared to explain a long-term disparity he’d observed in his classes, where female students tended to get better grades than male peers. In the study, adjusting for sleep quality differences between men and women appeared to almost entirely explain that gap, suggesting that male students could perform just as well if they slept better. It wasn’t possible to tell from the study whether men need more sleep than women to achieve the same performance, or if male students were simply more likely than female peers to sacrifice sleep, but Grossman says the issue is worth further study.

While Grossman’s study looked specifically at college students, making it difficult to generalize the results to the entire population, he says many of the takeaways probably apply to other people, too—namely the importance of good quality, consistent rest, whether you’re in school or not. “It’s also just about clarity and thinking and idea generation throughout the day,” Grossman says. “You will be more mentally prepared for your day” if you get enough sleep.

Grossman isn’t giving up on his original hypothesis about fitness, either. “I still think the exercise [theory] is right,” he says, “and I’m going to bring my guy Shaun T back into the mix someday.” 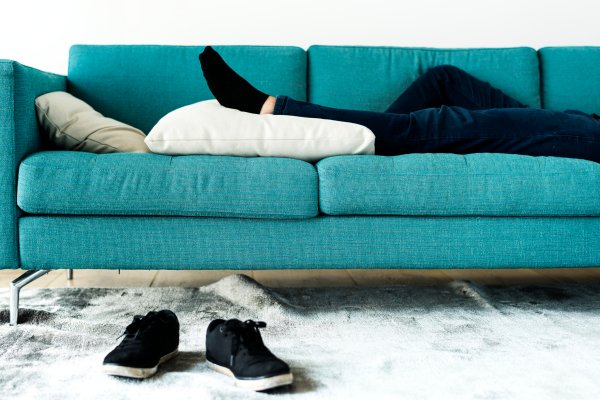 Go Ahead, Take a Nap. A New Study Says They May Be Good for Your Heart
Next Up: Editor's Pick