Can You Really Catch Up on Lost Sleep? Here's What the Science Says

Experts have long said that you can’t make up for lost sleep by snoozing more on your days off. But in 2018, a study published in the Journal of Sleep Research called that conclusion into question, suggesting that sleeping in on days off could cancel out at least some of the health risks associated with work-week sleep deprivation, including the threat of early death.

But a study recently published in Current Biology echoes previous convictions. It says extra weekend rest is not enough to make up for sleep lost during the week, and concludes that the “benefits of weekend recovery sleep are transient.”

Can you catch up on lost sleep? Here’s what the science says.

Losing even an hour puts you in sleep debt

Many people think of sleep like a bank account: Withdraw an hour on Monday, then deposit an extra one on Saturday to break even. But the equation is more complicated than that, says Dr. Cathy Goldstein, an associate professor of neurology at the the University of Michigan Sleep Disorders Center. “You might be getting some alertness benefits by sleeping longer on the weekends, but as far as truly making up for the lost sleep during the week, you really can’t make up for it hour by hour,” she says.

Research has suggested that a person would actually need four days of adequate rest to make up for even one hour of sleep debt. Since many people get less sleep than they need just about every weeknight, Goldstein says it’s almost mathematically impossible to close that gap over only two weekend nights. “The sleep debt is just accumulating over time,” she says.

Your circadian clock is more sensitive than you think

Pulling an occasional all-nighter or extra-early morning may not seem like a big deal. But Goldstein says fatigue isn’t the only consequence of an erratic sleep schedule; it also disrupts your circadian clock, an internal system that regulates hormone levels to promote sleep at night and alertness during the day.

Your circadian clock naturally starts secreting sleep-promoting melatonin around 9 p.m., and levels stay elevated throughout the night before dropping off in the morning, according to the National Sleep Foundation. Light exposure influences circadian rhythms somewhat — which is why you may have trouble sleeping after using screens at night — but if you maintain stable sleep and wake times, your internal clock should be similarly reliable, Goldstein says.

When you start tinkering with your sleep times, even by a little bit, you may see consequences. A few late nights in a row can move your circadian clock later, which will make your body want to be awake late at night, Goldstein says. Similarly, a string of early mornings can have you rising at the crack of dawn naturally. If you’ve ever struggled to sleep on Sunday after late nights on Friday and Saturday, circadian shifts may be why, Goldstein says.

Also, “there are health risks to any degree of circadian disruption,” Goldstein says. The effects have been best documented among night shift workers, whose non-traditional schedules are associated with cancer, cognitive decline and early death. But circadian rhythm shifts can affect your health no matter what your schedule is, research suggests. The new Current Biology study found that sleep-deprived people snacked more after dinner and experienced negative metabolic changes compared to people who got enough sleep for 10 days in a row, and those changes could not be fully corrected through weekend sleep. Other research has also linked losing just an hour of sleep to eating about 200 extra calories the next day.

Fatigue can also worsen productivity, work or school performance and workouts the next day, creating a ripple effect that can’t be easily corrected by hitting snooze on Sunday, Goldstein says.

Napping is better than sleeping in

If you’re exhausted by the time Saturday arrives, Goldstein says you should opt for a midday nap rather than a marathon overnight sleep. “The light exposure in the morning right after your sleep period is what we think is most important for keeping those regular biological rhythms going,” Goldstein says. “If you do need to log some extra hours, a midday nap might be better.” Previous research has also linked naps to better, memory focus and creativity. The National Sleep Foundation says that just 20 minutes of napping is enough to leave you feeling refreshed, as long as you don’t nap too close to bedtime.

Preserving your circadian rhythms by keeping stable wake times on the weekend and limiting nighttime light exposure may also improve your sleep quality during the week, Goldstein says.

The ultimate goal, of course, is to get enough sleep during the week that you don’t need to catch up on weekends. It’s a goal worth pursuing, Goldstein says. Even the busiest person should spare the time to sleep a little more each weeknight, since the payoff is worth it. “If you spend that extra time sleeping during the week, which is going to add up really dramatically, you’re going to save time because you’re going to perform more highly,” Goldstein says. 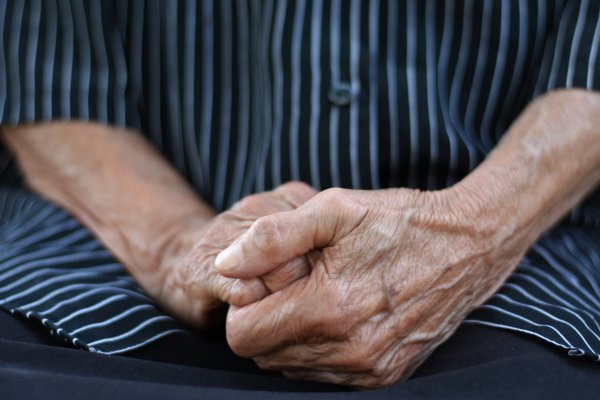 One in Three Seniors Is Lonely. Here's How It’s Hurting Their Health
Next Up: Editor's Pick