Hong Kong braced for widespread protests Tuesday as activists announced plans to use China’s National Day to continue their push for democratic reform.

The raising of the Chinese flag took place without incident at 8:00 a.m. local time, but in subdued fashion. The public were not invited and VIPs attending the ceremony were asked for security reasons to gather at the Hong Kong Convention and Exhibition Center to watch the event on closed circuit television.

In his speech to the dignitaries, Chief Secretary Matthew Cheung, said “Violence and confrontation are never solutions to problems. To resolve the current acute social conflicts, we need more than ever the solidarity of all Hong Kong people to work towards the same goal, seek common ground and accommodate differences.”

The surrounding streets were on lockdown, but a small procession by the League of Social Democrats political party was able to approach within a few hundred meters of the venue. Marchers carried banners that read “No national celebration, only national tragedy” and “End authoritarianism.” Live news streams showed a brief scuffle breaking out between them and a pro-Chinese group.

Addressing the procession, longtime dissident and former legislator Leung Kwok-hung, said: “With no democracy, Hong Kong will not have a future.” Afterward, he told TIME: “If there [is no] right to choose our leaders, to have self-governance, and if there is one-party rule, what is there for us to celebrate?”

Earlier, chairman Avery Ng said that the party’s warehouse had been broken into and vandalized by a dozen men and that party members were being followed.

Local media meanwhile reported that 6,000 police had been deployed in anticipation of unrest, with several roadblocks set up across the city. Hong Kong’s subway operator, which has come under sustained attacked by protesters who accuse it of colluding with police, shut 14 stations. More than two dozen shopping malls also brought down their shutters and major office buildings took precautions against vandalism and criminal damage. Streets that would normally be thronged on a public holiday were eerily quiet.

Defiant pro-democracy lawmakers said they would lead a march through downtown Hong Kong in the afternoon, despite a police ban on the procession. Protesters are also expected to attempt to disrupt horse races scheduled for today at the famous Sha Tin course.

A 15-year-old masked protester at the course, who wanted to be identified as Tom, told TIME that “October 1 is a special day. Not because we feel any attachment to China, but because it’s a golden opportunity for us protestors. Today, the international media has all their eyes on us. What we do is going to be known worldwide.”

According to local media, several people were arrested over the past two days at apartments where police found materials allegedly used for the making of petrol bombs.

Police are fearing widespread violence—even acts of terrorism. At a press conference, Monday, chief superintendent Tse Chun-chung said: “We have intelligence suggesting that some hardcore violent protesters are inciting others, including those with suicidal tendencies, to commit extreme acts like murdering the police, disguising as police officers to kill others, and setting fires in petrol stations … All acts are one step closer to terrorism.”

However, his remarks were immediately derided by protesters, who said that the sources of the intelligence were bogus.

Several protests took place over the weekend in the run up to National Day, which commemorates the 70th anniversary of the founding of the People’s Republic. Demonstrators lobbed petrol bombs at government offices, set fires in the streets, burned the Chinese flag, and tore down banners advertising National Day celebrations, while police responded with tear gas and water cannon.

Semi-autonomous Hong Kong has endured four months of unrest, sparked by a now withdrawn extradition bill that would have allowed rendition of fugitive suspects to China for the first time. The initial protests quickly expanded into a push for greater political freedom and, more recently, calls for self-determination.

The former British possession was retroceded to China in 1997 after 156 years of colonial rule, but its 7.2 million inhabitants remain culturally and linguistically distinct from mainland Chinese. Surveys have found that the majority of people in Hong Kong identify as “Hongkongers” and not as Chinese. 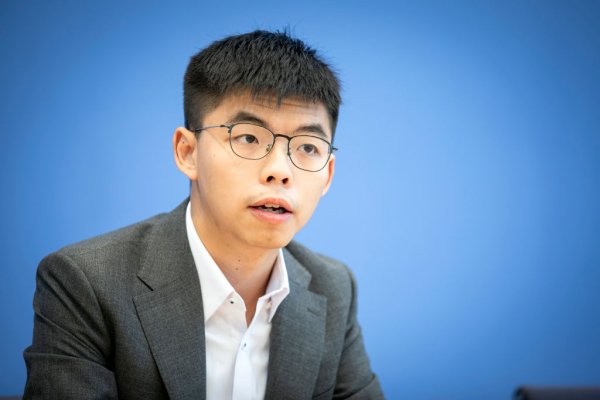