A dissident Hong Kong lawmaker was arrested and charged Thursday as the city’s anticorruption body claimed it had uncovered a payment to the legislator from media and retail mogul Jimmy Lai — a well-known supporter of local democratic causes.

A statement from the city’s Independent Commission Against Corruption said Leung Kwok-hung, 60 — an elected member of Hong Kong’s Legislative Council for the League of Social Democrats and popularly known as Long Hair because of his trademark tresses — was charged with one count of misconduct in public office and released on bail ahead of a court hearing Friday.

Antigraft officials say that Leung failed to declare the receipt of a payment of 250,000 Hong Kong dollars (about $32,200) on May 22, 2012. The payment allegedly came via intermediary Mark Simon, then the right-hand man of Lai, who was named in the statement as the source of the funds.

Hong Kong’s pro-Beijing camp has long accused Simon, a U.S. Navy veteran and onetime head of the local chapter of Republicans Abroad, of being a sometime spy for Washington — which Simon vigorously denies. Chinese state media has also attempted to discredit Hong Kong’s pro-democracy movement by suggesting that it acts under U.S. direction and with U.S. funding.

Simon’s former employer Lai is the founder of Asian clothing retailer Giordano and Next Media, a media conglomerate that publishes the high-circulation Apple Daily newspaper. Both through his newspaper and as an individual, Lai has lent support to the pro-democracy movement in Hong Kong, which since 1997 has been a sovereign Chinese territory but retaining a high degree of political and legal autonomy.

Lai was a prominent figure in the massive 2014 demonstrations, known as the Umbrella Revolution, in which tens of thousands of Hongkongers took to the streets to oppose the Chinese central government’s insistence that candidates to become the territory’s next top official must be screened by Beijing. He even appeared, inadvertently, as a white-shirted figure on TIME International’s now iconic Umbrella Revolution cover, his stooping figure just visible at the edge of the frame, choking on tear gas.

A protester stands defiantly while media tycoon Jimmy Lai, right, in a white shirt, receives assistance after being tear gassed in this image used on the Oct. 13, 2014, cover of TIME's international edition
Photograph by Xaume Olleros–AFP/Getty Images

Leung meanwhile is a veteran of Hong Kong’s protest movements, and has used his seat in the legislature to stage protests and raise topics the Chinese government considers taboo, like the 1989 massacre of students in Tiananmen Square.

Hong Kong is set to hold elections for its Legislative Council in September. 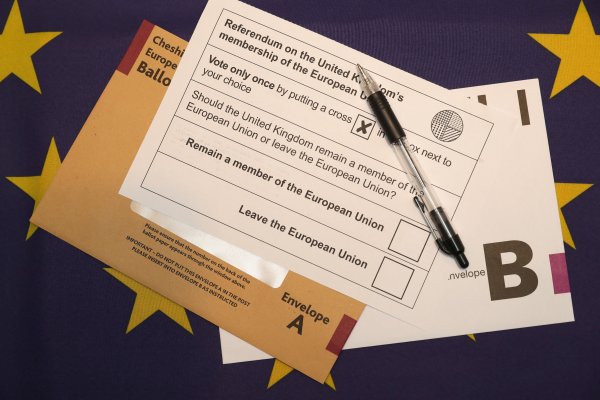 Polls Are Now Open as U.K. Votes on Brexit
Next Up: Editor's Pick