I Spent 2 Weeks With the New Apple Watch. Here's What I Think About It

When it comes to smartwatches, Apple’s got it on lock. Other wearables exist, but most are pretty hit-or-miss when it comes to the right balance of functionality and performance. And none, no matter your perspective, integrate into the iPhone the way the Apple Watch does. To be fair, it’s got an unfair advantage, given both gadgets come from under the same corporate roof. But that synergy also explains why the Apple Watch is such a great wearable, and why the $399-and-up Series 5 is a welcome improvement compared to the Series 4. It adds some cool gimmicks you’ll either love or hate, and some much-needed health tracking options. It’s the smartwatch that’s hard to outsmart — but there’s still room for improvement.

So what’s changed, exactly? Well, not much, at least in terms of looks. The Series 5 uses the same physical design as the Series 4. Inside, a new S5 processor and 32GB of internal storage — double the Series 4’s 16GB — makes the watch feel impressively responsive. There are some new finishes like titanium and the pricey white ceramic, if you’re feeling fancy. The new Series 5 Apple Watch also fits all the watch bands of the same size that came before it, meaning you won’t have to deal with any unexpected incompatibility issues (fun fact: the older 38 and 42mm bands will still work on your larger 40mm and 44mm Apple Watch).

One difference you will notice is the Apple Watch’s new always-on feature, which keeps the display active even when you’re not looking at it. Finally, the Apple Watch tells time, all the time. Usually.

That doesn’t sound like a big deal until you get a glance at your Apple Watch while you’re wondering exactly how long you’ve been standing in this subway car, delayed due to yet another switch malfunction, or lying in bed wondering what time it is yet worried to glance at your watch and be accosted with a glowing screen at, oh great, 2:25 a.m. Seeing the time on your wrist like, you know, an actual watch, is a huge plus. It might even get more people to consider wearing the Apple Watch as a watch, letting them forget all about the whole “smart” part until it’s convenient. It also features a privacy option, so personal events like Calendar appointments or messages go unseen until you decide to wake the Apple Watch by looking at it. To conserve battery life, the Apple Watch screen dims while it’s idle, while the display’s refresh rate is slowed from 60 frames per second to just one.

What’s more, the always-on feature makes Apple’s customizable watch faces more appealing, considering you can now see them all the time. My default watch face is usually packed with data — I can get the time and date, stay abreast of changing weather conditions, see my daily schedule, and check how active I’ve been throughout the day. But by using the Watch app on your iPhone, you can make a face for each aspect of your day or night. Going out with friends? Swipe over on your watch to bring out the cool face with all the huge bubbly numbers — that’ll look pretty stylish compared to a square black void. Hitting the gym? Just pick the watch face that has all your health and activity apps and complications easily accessible. Hell, pick the one that matches your outfit and let everyone choke on your fabulousness.

The Apple Watch Series 5 has a few other novelties designed to impress and show off its more technical enhancements and watchOS 6 improvements. One new app, Compass, does what it says on the tin, showing you where you’re headed either as an app or as a complication. There’s finally menstrual cycle tracking, making it easy to log your cycle whenever. The Noise app detects the decibels in the area, warning you if you’re being exposed to dangerously loud noises. They’re interesting additions that show Apple is exploring ways to get more use from a wearable that can afford to be always on, always listening, along for the ride.

But the Apple Watch’s always-on functionality isn’t perfect. For one, if you’re listening to music and want to take advantage of the easy-access controls, turning your wrist won’t display the fun watch face you chose and customized. Instead, you’ll get a small readout of the time, and some blurry playback controls hidden beneath it. You can change that in the settings by turning off the “Auto-Launch Audio Apps” option in the Wake Screen section of the iPhone’s Watch app — but then you’ll lose the handy ability to get playback controls when you lift your wrist. If you want to keep that functionality, you’ll have to either tap the Now Playing complication manually, or hit the digital crown to restore the desired watch face to its always-on glory. It’s annoying.

In addition, the Apple Watch, unlike a few other, popular wearable devices, has a pretty terrible battery life. Apple says the new Apple Watch can last up to 18 hours during normal use, and it certainly can, depending on how much you’re using it. But I usually got about 12 hours of use from it. At the end of each day, my Apple Watch would send out a plaintive haptic wail, indicating it was on its last legs by around 10 p.m. Unless you’re strategically charging it, or have another, older watch on hand, using it with third-party sleep tracking apps is out of the question, since it’ll need a recharge around the same time you do.

For a long time, the Apple Watch was a hard sell, a device for only those willing to be guinea pigs for Apple’s latest endeavor. It was hard to depend on a watch that wouldn’t last the whole day if you decided to, you know, use it. But by getting an Apple Watch, you were aware of the risks and rewards. You knew what you’d have to do to get the most out of it.

Now, the Apple Watch is quick, with a huge display and with even more ways to augment your iPhone’s capabilities. That always-on screen is nifty, the new apps are pleasantly utilitarian and mostly health-oriented, and a service like emergency international calling (on the cellular model) is a nice feature to have in a pinch. It’s the smartwatch to beat. But all those new features only serve to highlight the tightrope Apple’s walking when it comes to battery life. Here’s hoping it’ll finally make a watch that’ll get through the night next year. 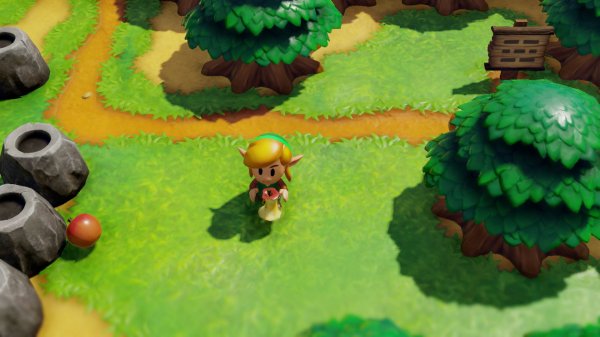 The Legend of Zelda: Link's Awakening Is a Nostalgia Trip Worth the Price
Next Up: Editor's Pick