(Bloomberg) –– The military aid at the center of the storm engulfing Donald Trump wasn’t just nice for Ukraine to have. It was crucial to holding at bay forces backed by the might of neighboring Russia.

The U.S. president is fighting a formal impeachment process based on allegations that he improperly pressured Ukraine’s government and may have withheld assistance to push Kyiv to provide dirt on potential electoral rival Joe Biden, whose son used to do business in the eastern European nation.

The supplies, which began with non-lethal items such as protective vests and radar equipment, were expanded under Trump’s administration to weapons including Javelin anti-tank missiles. Without them, the ongoing war with Kremlin-backed fighters in Donbas — which has killed more than 13,000 people — could have proven even more costly.

“This aid is critically important,” said Volodymyr Horbulin, a former head of the National Defense and Security Council. “If it hadn’t been granted, we’d have been left alone, face-to-face with Russia.”

While the Kremlin has acknowledged only a minimal role in the five-year conflict in eastern Ukraine, western countries accuse it of supplying arms, tanks and fighters. A case in point is the probe into the 2014 case of Malaysia Airlines Flight 17, which found the missile that downed the plane belonged to a Russian-based military unit.

Ukraine’s army, meanwhile, was suffering from years of neglect when fighting erupted following Russia’s annexation of Crimea. To make up ground, the government is investing at least 5% of gross domestic product in the military. But, while improved, it’s no match for its larger neighbor.

The latest controversy concerns $400 million of assistance. A person familiar with the matter says Trump ordered his acting chief of staff to delay a week before the now infamous call with Ukrainian President Volodymyr Zelenskiy. The aid was eventually approved.

Trump will release an unredacted transcript of the phone call on Wednesday that he said will show only “perfect” behavior and rebut claims he leaned on Ukraine to investigate Biden. The U.S. president will also meet Zelenskiy in person on the sidelines of the United Nations General Assembly before holding a news conference. Rudy Giuliani, Trump’s personal lawyer, said he couldn’t rule out the possibility that the president threatened to cut off assistance.

Trump later said he wants Europe to contribute more toward aid for Ukraine and would withhold U.S. contributions to the country again.

“There is a concern that military aide for Ukraine can be used as element of political pressure in the context of political fight inside the U.S.,” said Olena Tregub, secretary general of the Kyiv-based Independent Defense Anti-Corruption Committee.

Zelenskiy’s administration, for its part, is doing its best not to get drawn further into the furor.

“We haven’t seen in the U.S. government any attempts to block the aid,” newly appointed Defense Minister Andriy Zahorodnyuk told the BBC Tuesday. “On the contrary, we spoke to the State Department, Congress, the Defense Department and everywhere we’ve seen a desire to continue helping Ukraine. I wouldn’t say the aid was blocked on purpose.”

Staying as neutral as possible is key for Ukraine, which also relies on the U.S. for billions of dollars of financing and political backing in talks to end the war. Before his meeting with Trump, Zelenskiy issued a statement underscoring that Ukraine “needed support of the United States.” 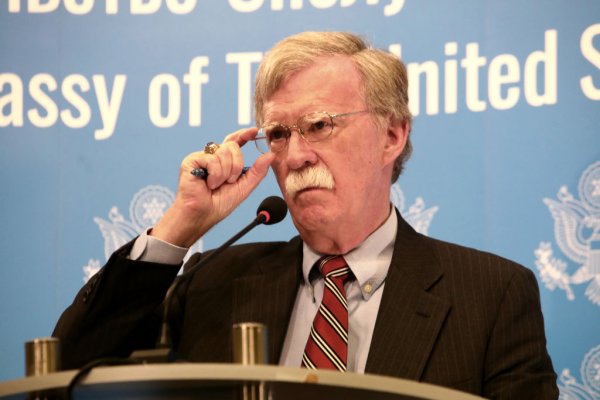 Ukraine Is Struggling to Make Sense of Trump and Bolton's Conflicting Messages on Russia
Next Up: Editor's Pick