Puerto Rico Braces for Tropical Storm Karen: Here’s What to Know About Its Path

As Tropical Storm Karen continues to inch closer to Puerto Rico and the Virgin Islands, forecasters say portions of the Caribbean should expect tropical storm-force winds and heavy rainfall that may cause flash flooding through Wednesday.

According to San Juan’s National Weather Service, the center of Tropical Storm Karen is about 70 miles south of San Juan and has maintained maximum sustained winds of 40 mph as it moves north at 7 mph.

Puerto Rico is once again in the path of a major storm weeks after a narrow miss from Hurricane Dorian, which went on to devastate parts of the Bahamas.

In its latest advisory, the National Hurricane Center said Karen is expected to continue to move north-northeast into Wednesday.

According to NHC, “the center of Karen will pass near or over Puerto Rico and the Virgin Islands today, and then will move over the Atlantic tonight and Wednesday.”

NWS San Juan meteorologist held a Facebook Live on Tuesday morning to give the latest updates on the Tropical Storm.

According to NWS Meteorologist Travis Washington, as of Tuesday morning forecasters are not expecting Karen to strengthen into a hurricane, but that potential flooding is serious and residents should stay out of the water at this time.

“Expect the rain to continue; if you don’t have to be on the roadways it’s best to stay home until Tropical Storm Karen passes,” he said. “The potential impacts for Puerto Rico and the U.S. Virgin Islands are flooding — we expect flooding to occur as a result of the heavy rainfall.”

Washington also said the agency wants to “emphasize” that it’s “best to stay out of the water as we expect hazardous marine conditions to continue from this morning all the way to this evening. If you do not have to drive, its best to stay home on Wednesday.”

Forecasters expect 2-4 inches of rainfall in portions of Puerto Rico and the Virgin Islands, with some isolated areas receiving up to 8 inches of rain.

NWS says that strong rains “may cause flash flooding and mudslides, especially in mountainous areas.”

Forecasters also warned of tropical storm-force winds, especially in gusts, by late morning Tuesday. NWS said winds could be higher on windward sides of hills and mountains, as well as in elevated terrains. 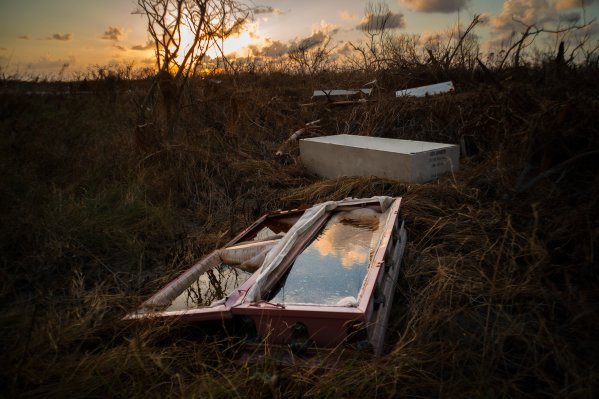 'Everything Was Broken.' The Photographer Who Captured the Most Haunting Photographs of Dorian and Its Aftermath
Next Up: Editor's Pick