Climate Change Is Devastating the Lush Gardens of Versailles

A swan posing in the lake in front of Chateau de Versailles.
Getty Images
By Helene Fouquet and William Wilkes / Bloomberg

(Bloomberg) — The manicured estate of the Versailles Palace was designed for an absolute monarch and withstood the French revolution. But now climate change is threatening its survival.

Hornbeam trees overlooking the estate’s Grand Canal died this summer, and in Marie Antoinette’s Trianon gardens, the beeches are withering. The worrying thing is that these weren’t only varieties from the era of Louis the XIV, but also new plantings meant to withstand the effects of global warming.

Northern Europe’s normally temperate weather is rapidly becoming hotter and drier, forcing gardeners on the 800-hectare (2,000-acre) park to adapt. The stately elms, chestnuts and birches that were favored by French royalty are being selectively replaced by species that stand better chances of resisting higher temperatures, new parasites and more volatile precipitation patterns.

The urgency to act was underscored when France’s National Center for Scientific Research on Tuesday released a climate model that showed the world becoming even hotter than previously expected.

Trees are one of nature’s biggest forms of carbon storage. The European Environment Agency estimates forests absorb 13% of all of the European Union’s carbon-dioxide emissions. But more frequent droughts and increasingly violent storms put the region’s woodlands at risk. “Trees used to have hundreds of years to adapt, but they don’t have that time anymore,” said Xavier Bartet, an officer in France’s National Forestry Agency. “And in nature, if you can’t adapt, you die.”

An antique illustration of the Grand Trianon
Getty Images

The effects are being felt across Europe. About 50 million spruce trees are believed to have perished, with extensive damage to larch, oak, beech and pine varieties, according to Gert-Jan Nabuurs, forestry expert at Wageningen University in the Netherlands.

In eastern Germany, pine canopies have been bleached a sickly brown with ground water the lowest since records began in 1961, according to the country’s DWD weather service. Charred stumps point to a disturbing new trend of wildfires. The BDF forestry association estimates 100 million German trees have died in droughts and storms since 2018.

Europe is particularly exposed to climate change, because its weather is dominated by the jet stream. The flow of moist winds from the Atlantic typically brings in ample precipitation to maintain the region’s ecosystem, but kinks have developed as arctic ice melts, causing air to blow in from the Sahara with increasing regularity. Warmer temperatures are changing growing patterns, with chestnut trees in Portugal struggling in lower altitudes, where they once thrived.

Storms fueled by warmer temperatures are also a problem. The risks were evident last October, when the Italian peninsula was pounded by storm gusts exceeding 200 kilometers an hour (124 mph), damaging 42,500 hectares of forest. The Comelico Dam near the Austrian border was covered with trees battered into the Piave river. For centuries, such timber was brought to Venice on rafts to be used for foundations of the lagoon city’s historic “palazzi.”

To be sure, it’s not bad everywhere. Sweden has planted more trees than it cuts down since the 1920s, and today there is almost twice as much wood supply than at the start of 20th century, but then there’s the new problem of wildfires. In Finland, climate change is speeding up tree growth, but the Nordic country — wary of extreme weather and the spread of pests such as bark beetle — is more actively managing its timber resources including using selectively bred seedlings.

Dying woodlands could mean that greenhouse gases build up even faster. Concerns have led to mounting public pressure. A Danish broadcaster held a telethon last weekend, raising 2.4 million euros ($2.6 million) from viewers to plant more than 900,000 trees, and an artist created a mock forest inside a football stadium in Austria to raise awareness. Ursula von der Leyen, the incoming European Commission president, called protecting the environment the bloc’s “most pressing challenge.”

While European leaders have vowed to act, the situation is complicated by an economic slowdown and concerns about financing. In Germany — where a summer heatwave threatened to buckle highways and the receding Rhine river risked halting shipping for the second straight year — Chancellor Angela Merkel’s government on Friday is due to decide on measures to get its climate goals back on track.

There’s no easy fix. Efforts to make forests more robust include replanting Turkish oak trees in France and testing seeds from drier areas in the central Loire valley for future wine barrels. But the measures are a crapshoot. At Versailles, about 50% of new saplings die in the first year, and messing with local ecosystems can have damaging effects on native varieties, with groups like Ireland’s Woodland League seeking to halt the introduction of new species.

“All we do is still experimental, and it’s risky,” said Brigitte Musch, chief of climate-change research for the French forestry agency. “We are under pressure to work fast, for things that will matter for the generations to come.”

The Versailles estate, which spends about 3 million euros annually to maintain its grounds, is the elite of Europe’s forests. The wider reality can be seen behind a rusty fence at the end of the grounds at the Arboretum de Chevreloup. The conservation park has a budget less than 5% of the palace’s, and the effects of low rainfall and record heat were evident in the balding canopies and shriveling Patagonia trees.

To avoid such a fate, France’s forestry agency is teaming up with counterparts in Europe and Turkey to develop software to determine what varieties will have to be planted in the years to come. The software, which is working with a worst-case scenario of summer temperatures rising as much as 5.3 degrees Celsius (below the latest forecast), will be translated in English to be usable by peers worldwide.

At Versailles, future-proofing the grounds is being meticulously orchestrated. The estate is building a database of all its vegetation, insects and animals. The trees will be given more space to capture the water in the soil and retain humidity. The goal is to keep the spirit of the Sun King’s grandeur alive into the next century.

“Visually, the palace visitors won’t see any major changes,” said Baraton, the chief gardener. “But silently everything is changing.” 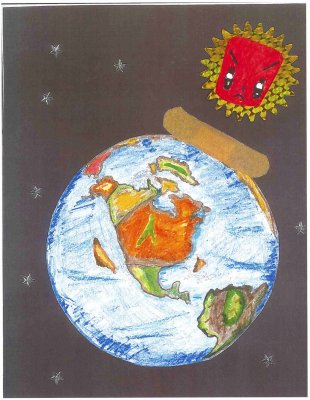 Children’s Art Answers the Question: What Will Earth Look Like in 30 Years?
Next Up: Editor's Pick