The True Story Behind Godfather of Harlem

EPIX’s Godfather of Harlem chronicles the struggle of one of America’s most notorious African-American mobsters as he fought to reclaim his neighborhood after more than a decade in prison.

Oscar winner Forest Whitaker stars as real-life Harlem mob boss Ellsworth “Bumpy” Johnson, who has been portrayed in multiple films, most notably Ridley Scott’s 2007 American Gangster. Denzel Washington’s character in the movie, Frank Lucas, was a close associate of Johnson’s who took over after his friend’s death.

EPIX’s 10-episode series, which premieres Sept. 29, is inspired by Johnson’s incredible life and picks up in 1963, immediately after his 11-year sentence in Alcatraz on a drug conspiracy charge.

Upon his return, Johnson finds much has changed in Harlem during his time away. He jokes that the only thing that remains is the famous Apollo Theater.

In Godfather of Harlem, Johnson adjusts to life as a free man while simultaneously attempting to regain control of his turf, which has been overtaken by the Italian Genovese crime family—led by Vincente Gigante, played in the series by Vincent D’onofrio.

Here is the true story behind Godfather of Harlem.

Who was Bumpy Johnson?

Ellsworth Raymond Johnson was born in Charleston, S.C., on Oct. 31, 1905. He was given the nickname “Bumpy” as a young boy due to a bump on the back of his head.

Johnson’s family moved north when he was 10 to avoid a lynch mob when his older brother was accused of killing a white man. He went on to move in with his sister in Harlem when he was a teenager.

Johnson spent much of his 20s in and out of prison, but truly made a name for himself in the 1930s when he began working for the Harlem mob boss Stephanie St. Claire, known as “The Queen of Numbers.” He eventually become the main enforcer for St. Claire’s illegal gambling business. As St. Claire’s right-hand man, Johnson was at the forefront of the illegal numbers turf war against Jewish mobster Dutch Shultz.

After Shultz was killed in a hit by infamous gangster Charles “Lucky” Luciano, Johnson teamed up with the Italian mafia and formed an alliance that would last for decades. This alliance boosted Johnson’s profile as one of the first black gangsters to successfully work with the Italian mob. Over the years, Johnson expanded to the narcotics trade and was eventually crowned the kingpin of Harlem.

In 1952, at the height of his reign, Johnson was arrested for selling heroin. Although he maintained that he was framed, Johnson was sentenced to 15 years in the infamous Alcatraz Federal Penitentiary in California. Even while in prison, Johnson’s legend grew. There are rumors that he helped orchestrate the 1962 escape of three prisoners by arranging a boat to whisk the trio away, an especially impressive feat considering Alcatraz was known as America’s most secure prison.

In 1963, Johnson returned home to Harlem and was greeted by a parade. Picking up where he left off, he once again reigned until his death in 1968 at the age of 62, of heart failure while eating at the neighborhood’s Wells Restaurant.

While Godfather of Harlem does allude to Johnson’s storied exploits before his 10-year prison stint, it does not go into detail. On the show, when Johnson returns to Harlem, he is not greeted by a parade but instead his loyal wife Mayme (Ilfenesh Hadera) and dozens of black Harlemites who turn to Johnson for favors and help.

Finding his neighborhood in disarray, Johnson immediately steps back into mobster mode and must face up against Vincente “Chin” Gigante.

Who was Vincent “Chin” Gigante?

In Godfather of Harlem, Vincent “Chin” Gigante (Vincent D’onofrio) is Johnson’s main antagonist upon his return from prison—constantly undermining Johnson’s attempts to regain control of Harlem.

Gigante has long been considered one of New York City’s most infamous mobsters. Born in 1928 in Manhattan, Gigante got the nickname “Chin” from his mother, who would call him “Chinzeeno.” A former boxer, Gigante worked his way up from a driver to an enforcer/hitman to a top boss of the Genovese crime family.

Later in life, he was known as the “Odd Father” for his strange behavior, which included wandering the streets in a bathrobe. But it was all discovered to be a long con to avoid jail time, and in the 1990s he was sent to federal prison on racketeering and conspiracy charges. Gigante died in federal prison in 2005.

On the show, Gigante is portrayed as an eccentric figure who refuses to cooperate with Johnson. There is not much known about the real-life relationship between the two mobsters, but it’s very possible that the two, who both worked with the Genovese crime family in Harlem, crossed paths.

What was the nature of Bumpy Johnson’s real-life relationship with Malcolm X?

In Godfather of Harlem, when Johnson returns from Alcatraz, he is greeted by old friend “Detroit Red,” a.k.a. Malcolm X.

Malcolm X (Nigél Thatch) approaches Johnson to help him clean up the streets after the Italian mob has inundated Harlem with heroin. With Johnson’s guns and Malcolm X’s soldiers from the Nation of Islam, the pair take on the Genovese family to regain control of Harlem.

On the show, Malcolm X is a popular public figure in Harlem who preaches the self-sufficiency taught in Islam, motivated by the deterioration of a neighborhood that has succumbed to drug addiction. Malcolm X claims that Johnson was the person who set him towards the path of Islam before he went to jail when he was at his lowest point of addiction.

In real life, Johnson and Malcolm X had a friendship that went back to the 1940s when Malcolm X was a minor street hustler known as “Detroit Red” because of his relaxed red-tinted hair. Johnson also provided Malcolm X with protection when he parted ways with leaders of the Nation of Islam in 1964—but Malcolm X told Johnson it was not good for his image for the two to be associated with one another and Johnson removed his guards. Two weeks, later Malcolm X was assassinated by fellow members of the Nation of Islam.

What was Johnson’s life like as a family man?

Elise (Antoinette Crowe-Legacy) is portrayed as a shoplifting heroin addict and it is revealed that Johnson and his wife Mayme decide to raise Elise’s daughter, Margaret, as their own, keeping her true lineage a secret from her.

Elise’s addiction strengthens Johnson’s resolve to take over the narcotics trade in Harlem from the Italians. Under their control, the show depicts the trade as overrunning Harlem by the time Johnson gets out of prison.

According to Johnson’s granddaughter Margaret, Johnson did actually raise her as his own daughter—lavishing her with fancy gifts throughout her childhood.

One of the main storylines of the show is the star-crossed love story between Gigante’s 22-year-old daughter Stella (Lucy Fry) and local black musician Teddy Greene (Kelvin Harrison Jr.). Greene’s mother reaches out to Johnson to separate the pair, due to the danger their relationship poses to Greene’s life.

The show does accurately portray the dangers of interracial dating in the early ’60s. Interracial marriage was illegal in the U.S. until the Loving v. Virginia Supreme Court decision in 1967. But the love story is a fabrication—in real-life Gigante had five children with his wife Olympia, starting with his eldest son Andrew, born in 1956. All of his children, including two daughters born to his mistress, also named Olympia, would be too young to have been in their 20s during the timeframe of the show.

Is the show’s Malcolm X and Muhammad Ali storyline true?

In Godfather of Harlem, a 21-year-old Muhammad Ali, still going by Cassius Clay, is in Harlem to promote his 1963 fight with Doug Jones. Clay meets with Malcolm X to discuss his decision to go public with his Islamic faith but is told by the activist to keep his religion secret until he is the heavyweight champ because he could be denied a boxing license.

On the show, the conversation is tapped by the FBI, and Gigante’s associates get their hands on the tape and blackmail Clay into throwing the fight, promising him they would get him a fight with Sonny Liston if he did. Clay declares himself the greatest and refuses, going on to win the fight. With the help of Johnson, he is ultimately able to destroy the tapes, one-upping Gigante.

While there is no proof that this meeting and subsequent blackmailing happened, the FBI did keep tabs on Malcolm X for years, and Clay did not publicly convert to Islam until 1964—months after he became the heavyweight champion of the world after defeating Sonny Liston.

There is also no proof that Clay and Johnson ever met, although it was more than likely the Harlem mob boss was had a front-row sear at the historic 1963 fight in Madison Square Garden to support the New York-born Jones.

Rev. Adam Clayton Powell Jr. plays a major role in the show as one of Johnson’s more powerful allies. The pair initially team up when Powell needs Johnson to use his connections to Italian mobster Frank Costello to pull strings to aid his congressional re-election bid. Powell is portrayed as offering Johnson his federal law enforcement connections in return.

A celebrated civil rights activist, Baptist pastor and Democratic Congressman, Powell was the first African-American to represent New York in the U.S. House of Representatives and represented Harlem in Congress for 26 years. He fought for black rights in Harlem for decades, organizing protests and supporting legislation that supported civil rights, but he was also known for his shadier dealings and bombastic personality, which tarnished his reputation.

Powell’s legal troubles began following his 1962 European vacation with a beauty queen, his receptionist and a female counsel for Education and Labor. Powell was accused of misusing public funds to take trips abroad. Legal battles regarding slander ensued and Powell avoided court dates and spent more time living in Florida. In 1967 the House Democratic Caucus removed Powell as chairman of the House Education and Labor Committee.

Godfather of Harlem goes all-in on the notion Powell was corrupt. He is shown to be more than willing to team up with Johnson to his advantage. While both Johnson and Powell Jr. were major power players in Harlem at the same time, there is no record of the pair associating with one another and no evidence that Powell had mob ties. 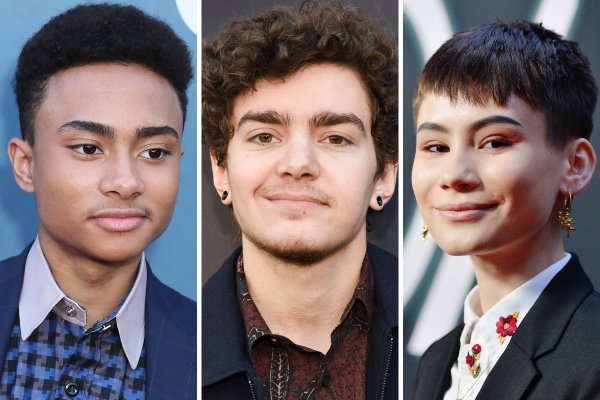 How a New Class of Trans Male Actors Are Changing the Face of Television
Next Up: Editor's Pick