Sean Spicer Was an Extremely Good Sport on Dancing With the Stars. That's Exactly the Problem

Sean Spicer didn’t have much to say on Monday’s season premiere of ABC’s Dancing With the Stars. For the most part, the former White House Press Secretary turned memoirist, super-PAC spokesman and now controversial reality TV contestant—who couldn’t open his mouth during his calamitous six-month stint in the Trump Administration without sticking a foot in it—let his costume do the talking. And it was loud. Clad in a shiny, ruffly, chest-baring chartreuse shirt, Spicer shimmied gamely into the show’s Art-Deco-camp studio at the beginning of the episode. Though he spent the first hour and 45 minutes of the two-hour premiere hovering in the back of group shots, his face obscured but bits of his flammable-looking top glistening tackily under the lights, it was clear from the moment he made his entrance that Spicer would be playing the role of the good sport.

After raising eyebrows last month by publicly lamenting a new executive producer’s decision to book “divisive” celebrities “from ANY party affiliation,” host Tom Bergeron kept any lingering frustration over Spicer’s presence well concealed. And the rest of the cast followed suit. For her part, his dance partner Lindsay Arnold poked fun at his limited skills (“He definitely isn’t a natural”) but maintained that she was “looking forward to forming [her] own opinion” about Spicer as a person. He grinned his way through the judges’ good-natured ribbing and gratefully praised Arnold for her attempts at whipping him into shape.

The show did—briefly and cagily—address the backlash to his casting in the rehearsal montage that preceded his debut performance, a salsa number set to the Spice Girls hit “Spice Up Your Life” that opened with the political operative pounding bongos and closed with him executing a knee slide that looked painful. Alongside clips of innocuous briefing room gaffes, Spicer admitted that his time in Washington was “tumultuous,” fretted that Americans had gotten a “one-dimensional” view of his personality and confessed that dancing in front of an audience of millions was even more intimidating than facing the media. Responding to a tweet in which Trump cheered Spicer’s casting, Spicer basked awkwardly in the glow of his former boss’s approval: “It’s nice to have the leader of the free world on your side.”

On the whole, Spicer came off as humble and self-aware but far from contrite—a triumph of image rehab without accountability. His success is more than a little infuriating when you remember—though of course he would prefer that you forgot—that the original controversy surrounding him wasn’t just partisan noise. The problem with a primetime dance competition giving Spicer a platform to burnish his reputation isn’t that he holds conservative views; it’s that he helped normalize practices, from his invention and repetition of obvious falsehoods to his antagonistic relationship with the press, that were previously beyond the pale for American politics. When Spicer appeared on the Emmys in 2017, just a few months after leaving the White House, former Obama Administration speechwriter David Litt called his comeback “an I’m-getting-away-with-it-right-now-because-I-let-the-American-people-down-and-you’re-applauding-me-for-it tour.” Two years later, that tour rolls on.

Bergeron needn’t have worried that the former press secretary would inject Republican talking points into DWTS or do anything else to jeopardize what the host described as a “joyful respite from our exhausting political climate.” (Personally, I would describe the experience of sitting through the two-hour broadcast as more “excruciating” than “joyful.”) The danger in casting Spicer isn’t that he could politicize the show; it’s that, with each episode, the show will help to de-politicize Spicer. The more we watch him ham it up in funny costumes, the more we’ll forget what he did. The shameful details of his legacy will fade from our collective memory, merging into an undifferentiated mass of late-2010s cultural curiosities. Once, he was the press secretary notorious for practicing casual Holocaust denial, justifying the President’s position on Syrian President Bashar al-Assad with the absurd claim that Adolf Hitler “didn’t even sink to using chemical weapons” against his own people. Now—like cast mates James Van Der Beek, Karamo from Queer Eye and Supremes legend Mary Wilson—we know him simply as a “star.” 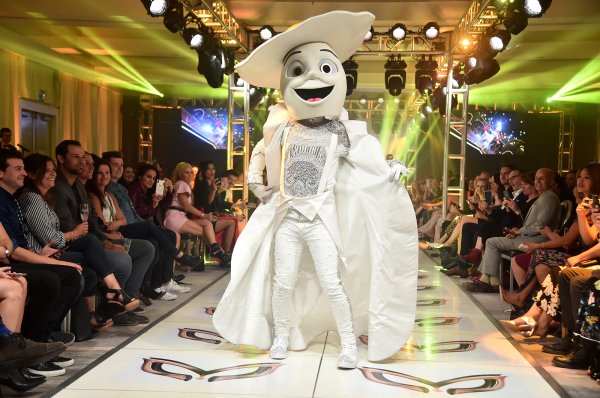