Ideas
By David Litt
Litt, a former senior speechwriter for President Barack Obama, is the author of Democracy in One Book or Less: How It Works, Why It Doesn't, and Why Fixing It Is Easier Than You Think and Thanks, Obama: My Hopey, Changey White House Years.

“This will be the largest audience to witness the Emmys, period — both in person and around the world.”

So declared Sean Spicer, the supposed-to-be disgraced former press secretary, during a surprise guest at the Emmys last night. If Hollywood is a hotbed of anti-Trump sentiment, you wouldn’t have known it last night. After his brief appearance making fun of the most famous time he lied to the American people, the supposedly-disgraced press secretary posed backstage for pictures with celebs.

I’m all in support of well-placed humor, especially for politicians. (I just wrote a book on my time writing speeches and jokes, plenty of them self-effacing, for President Obama.) But this wasn’t that. Before joining the Trump Administration, Spicer was a typical Republican hack — he spun, often furiously, but drew the line at outright lies. But last night he didn’t express the tiniest hint of remorse for committing professional malpractice or creating an atmosphere in which no claim from the White House — from the size of a crowd to the effects of a hurricane — can be believed.

This wasn’t an apology tour. This was a bragging tour. This was an I’m-getting-away-with-it-right-now-because-I-let-the-American-people-down-and-you’re-applauding-me-for-it tour.

In the end, however, the blame doesn’t lie with Spicer. He was given a golden opportunity to turn what ought to be a moment of professional humiliation into 15 minutes of fame. Why not take it?

No, the mistake was made by whoever decided to bring Spicer on in the first place. What we saw last night is that for all their attacks on “Hollywood liberals,” what the GOP elite want more than anything is to be embraced by the culture they claim to be at war with. They want to be applauded at Hamilton despite supporting a racist candidate. They want to be welcome in fancy French restaurants even as they attack “cosmopolitans” and “globalists.”

Most of all, they want pictures with celebrities. To bask in the glow of famous person, even for just a moment, is a kind of American dream — and they are anything but immune.

Which means that, for elites anyway, the most powerful form of resistance is social shame. Don’t invite Ivanka, Jared and Gary Cohn to fancy dinner parties; don’t treat Steve Bannon as a thought leader on 60 Minutes; when Anthony Scaramucci wants those hard-to-get theater tickets, tell him to kiss off (or even better, use the kind of language he’d understand).

I’m not suggesting that this social pressure should apply to Republicans. But it should apply to Trumpists. It’s the price you pay for willingly joining an administration that runs a racist campaign, argues there’s “both sides” to Nazi-ism and colludes with Russia to undermine the United States.

So yes, there’s a place for former White House staff in comedy (at least, I sure hope there is). But it wasn’t the Emmys. Not for Sean Spicer. Not last night. 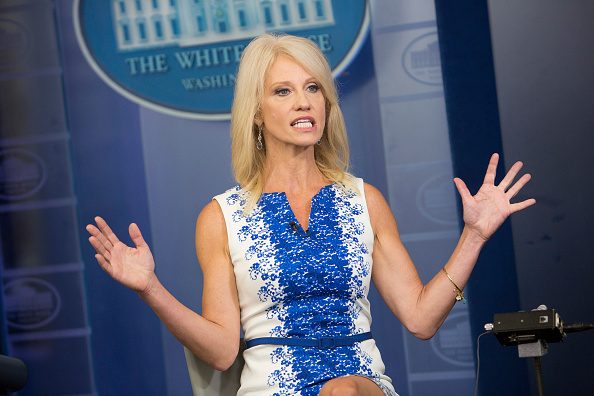 Kellyanne Conway Slams Emmys for 'Sameness' of Trump Criticism
Next Up: Editor's Pick