Netanyahu's Defense Treaty with Trump Is a Bad Idea. Just as Well It's Only a Gimmick

Gilead Sher, a former chief of staff to Israel’s Prime Minister and senior peace negotiator, is a Senior Fellow at the Baker Institute and the Tel Aviv Institute for National Security Studies INSS

Alon Pinkas is a former Consul General of Israel in New York, and acted as foreign policy adviser and chief of staff to Shimon Peres, Ehud Barak, and Shlomo Ben Ami

First there was the moving of the U.S. Embassy to Jerusalem. Then came a recognition of Israel’s sovereignty over the Golan Heights, followed by a qualified U.S. statement that Israel has the right to annex portions of the West Bank. All positive declarations, all contested issues in an eventual peace process, all exercises in declaratory futility, not substance. All these, while Trump’s long-awaited Israeli-Palestinian “Deal of the Century” is yet to be laid out – if at all.

Israel’s relations and effective alliance with the U.S. are the central tenet of its national security, a diplomatic shield and a military force multiplier. These relations are an invaluable and irreplaceable asset that Israel cherishes deeply. A formal “defense pact”, however, would be an entirely different story — and the reasons for and against it bear some thinking about.

In the past, Israel refrained from raising the issue of a formal treaty, since the U.S. demanded two prerequisites that Israel could not deliver: Permanent and recognized borders, and signing the Nuclear Non-Proliferation Treaty (NPT). Additionally, a defense pact would require approval by the U.S. Senate. This is not necessarily a process Israel wants.

Those in Israel who supported such a pact argued it would amplify Israel’s deterrence, that it would formalize the existing defense relationship and elevate Israel’s stature in U.S. foreign policy, and that it would enhance regional stability. A U.S.-Israel defense treaty, the thinking went, would also conceivably serve as a component of a regional security system, under U.S. auspices, in a foreseeable future.

These arguments are undoubtedly not without merit and substance. But in 2019 they are flawed in one major way: They were predicated on a different Middle East, in a totally different regional and global reality. In its 72nd year of independence Israel is under no existential threat and enjoys an unrivaled military advantage and technological superiority. The military threats Israel does face are from non-state actors, not amenable to conventional deterrence. U.S. support of Israel, both diplomatically and militarily, is already factored into their behavior and calculus. In short, a treaty would not deter anyone or anything.

The arguments against a defense pact, shared by a majority in the Israeli defense and diplomatic establishment, were more compelling in our view.

The main argument against a pact was that it would not be realistically practicable, at a time when some form of a “peace process” still existed: that in exchange for a pact, Israel would be asked to make major concessions and take such security risks that a pact would not adequately address.

A full defense pact would also run contrary to Israel’s idea of self-reliance, the principle that Israel would never ask another to physically defend it. Material support, state-of-the-art-military systems, yes. Soldiers, no. Never. Conversely, the public in Israel would not endure casualties of IDF soldiers in a distant U.S. war mission, say, in Afghanistan, South America or Saudi Arabia.

Such a pact would invariably require coordination, cooperation, pre-approval and U.S. effective veto power over Israeli military actions. Let’s say there was a U.S.-Israel defense pact in place on June 5, 1967 or June 7, 1981 or Sept. 6, 2007. Israel could not have carried out the preemptive strike against Egypt (the Six-day War), the destruction of the Iraqi nuclear reactor in Osiraq, or the demolition of the nascent Syrian nuclear reactor in Al Kibar, respectively.

The most compelling argument, finally, was that a pact, notwithstanding the legal requirements and complications in the U.S. regarding pacts and treaties, would do little more than formalize what already exists. And that would poke adversaries in the eye, after Israel has gone out of its way to impose operational limitations upon itself to avoid infringing on U.S. interests.

Today, there is a yet more pressing argument against such a pact — that it would significantly narrow and constrict Israel’s maneuvering room and operational flexibility, at a time when the U.S. is disengaging from the Middle East, when Iran and Russia are entrenched in Syria, and when Iran’s Hezbollah proxy is present in Lebanon.

Yet these arguments are redundant, when all is said and done. Because there is no “Defense Pact” or “Mutual Defense Treaty.” What lies behind the tweets, the headlines and the frantic Washington-Jerusalem consultations is a political gimmick, designed to attain meaningless public relations points ahead of a difficult election. A defense treaty concocted by Prime Minister Netanyahu for political benefits and possibly entertained by President Trump or his staff is not a treaty. It’s nothing more than a hollow stunt. 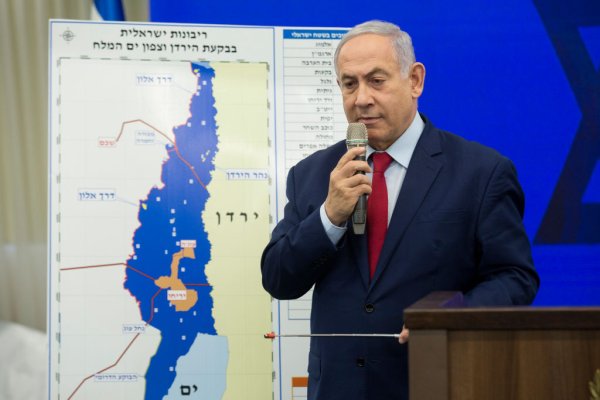 Israel's Netanyahu Vowed to Annex a Large Part of the West Bank. It's Gone Unchallenged by His Rival
Next Up: Editor's Pick