The U.S. officially opened its embassy in Jerusalem on Monday with a celebratory inauguration ceremony attended by President Donald Trump’s daughter Ivanka, the President’s son-in-law Jared Kushner and several Republican members of Congress and the Trump administration.

But 70 miles away in Gaza, at least 52 Palestinians were killed in clashes with Israeli troops in the most violent clashes at the border of the Palestinian territory in years — the result of fury over Trump’s formal recognition of Jerusalem as Israel’s capital city, as well as anger stretching back 70 years to the founding of Israel as an independent state.

Here is what you need to know about the embassy opening and the deadly protests.

Why is the U.S. moving its embassy to Jerusalem a big deal?

US ambassador to Israel David Friedman listens as Senior White House Advisor Jared Kushner delivers a speech during the opening of the US embassy in Jerusalem on May 14, 2018.
Menahem Kahana—AFP/Getty Images

At 9 a.m. Eastern Time (4 p.m. local time) on Monday, May 14, the U.S. embassy was formally moved from Tel Aviv to the city of Jerusalem — the result of a campaign promise Trump had made to the pro-Israel group American Israel Public Affairs Committee. In a tweet, Trump described the event as “A great day for Israel!”

Moving the embassy is a controversial decision because Jerusalem is not officially recognized by the United Nations or most other countries as Israel’s capital. Eastern Jerusalem was captured by the Israelis in 1967 during the Six-Day or Middle East War, and Israel now claims the entire city as its capital — despite disputes over the city’s status, including under international law. Palestinians also hope to establish a capital in East Jerusalem.

Although Israel declared Jerusalem its capital in 1980, most foreign governments have made a point of locating their embassies in Tel Aviv, Israel’s second largest city. The new U.S. embassy will be the first of its kind located in Jerusalem. Guatamalan President Jimmy Morales is planning to follow in Trump’s footsteps and is also moving Guatamala’s embassy from Tel Aviv to Jerusalem.

The ceremony opening the embassy coincided with the 70th anniversary of Israel declaring independence — May 14, 1948.

Where is the new embassy?

The new embassy is located in the fortresslike U.S. Consulate General in the residential neighborhood of Arnona in Jerusalem. By the end of 2019, the compound is to be expanded to include an interim embassy annex, according to the New York Times.

The new embassy will open with an initial staff of at least 50, Trump Administration officials told the Associated Press. U.S. Ambassador to Israel David Friedman will split his time between Jerusalem and Tel Aviv. The two cities are roughly 50 miles apart.

How are the Palestinian protests connected to the embassy?

Palestinians look at smoke billowing from the site of an Israeli air strike on a Hamas' military site in Beit Lahia near the border between Israel and the Gaza Strip, east of Jabalia on May 14, 2018.
MOHAMMED ABED—AFP/Getty Images

Palestinians believe Jerusalem — a holy city for Christians, Jews and Muslims — should be the capital of a Palestinian state. Trump’s decision to move the embassy — therefore officially recognizing Jerusalem as Israel’s capital — has been viewed as the U.S. endorsing full Israeli rule over the whole historic city.

Mass protests began on March 30. On Monday they escalated with an estimated 35,000 protesting at the border fence between Gaza and Israel, according to the Wall Street Journal. Gaza’s Health Ministry told the Associated Press that at least 52 Palestinians were killed and 1,200 others shot and wounded by Israeli soldiers who confronted the protestors. Among those killed were a 12-year-old and a 14-year-old, according to the Journal.

The date of the U.S. embassy opening — May 14 — also bears significance to Palestinians, who mark Israeli independence as the “nakba,” or “disaster.” It is a reference to the displacement of hundreds of thousands of Palestinians who fled were or forced out of their homes in territory that is now Israel.

Who went to the opening?

President Trump’s daughter Ivanka Trump and her husband Jared Kushner, a senior advisor to Trump, are the most high-profile people attending the opening. President Trump did not attend, but recorded a video message that said the Jerusalem embassy was “a long time coming.”

Several members of Congress, all Republican, were also present. 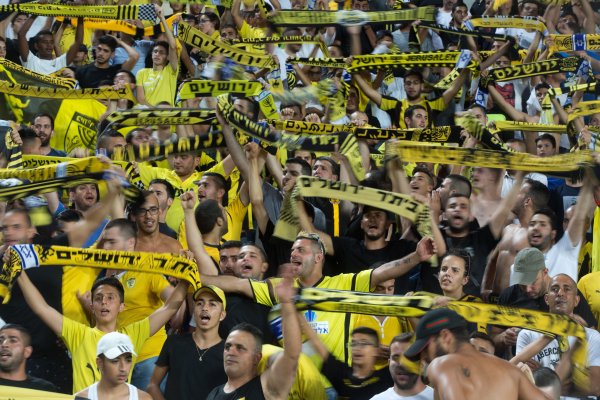 Israeli Soccer Team Renames Itself After Donald Trump
Next Up: Editor's Pick