A New York Times report, published Saturday evening, alleges that it has corroborated more details in the case of a woman who accused Supreme Court Justice Brett Kavanaugh of thrusting his penis at her during a Yale party in the early 1980s.

The allegations from Deborah Ramirez, who was a freshman at the time, first surfaced during Kavanaugh’s heated Senate confirmation hearings. It was at those Senate hearings, that Christine Blasey Ford accused Kavanaugh of trying to rape her at a house party in 1982 in a gripping testimony that sparked many women to come forward with their own stories about sexual assault.

During the hearings, Kavanaugh had suggested that Ramirez’s accusations would have been “the talk of campus” if they were true. The Times’ report alleges that it was.

Kavanaugh has emphatically denied any and all allegations of sexual assault. He did not speak to the Times about their latest report, because they could not agree on terms for an interview, the newspaper stated.

The Times report also surfaced similar, yet previously unreported, allegations that Kavanaugh had his pants down at a different college party, where his friends pushed his penis into the hand of a female student. According to the report, classmate Max Stier witnessed the incident and alerted senators and the F.B.I. about this account. The report claims the agency did not investigate and Stier has declined to speak about the incident publicly.

The report also states the F.B.I. interviewed none of the 25 individuals, brought by Ramirez’s legal team to the agency’s attention, who may have had corroborating evidence in her allegations. Additionally, many of those potential witnesses named by Ramirez “tried in vain” to reach the F.B.I. on their own, The Times said.

At the time, Democrats were convinced the F.B.I. investigation into the allegations was rigged in Kavanaugh’s favor and manipulated by the White House. The agency did not interview Ford or Kavanaugh in the process.

On Sunday morning, President Donald Trump weighed in on the new and reportedly corroborated allegations, calling them “false accusations.” The President said the Department of Justice should “come to his rescue” and that Kavanaugh “should start suing people for libel.”

Several Democratic candidates for the 2020 presidential election have also been outspoken on the issue, with at least three calling for his impeachment.

Julián Castro tweeted after the new allegations surfaced that “it’s more clear than ever that Brett Kavanaugh lied under oath” and that “he should be impeached.”

Sen. Kamala Harris tweeted that “he was put on the court through a sham process” and that “he must be impeached.”

Sen. Elizabeth Warren tweeted that the “newest revelations are disturbing” and “like the man who appointed him, Kavanaugh should be impeached.”

Beto O’Rourke tweeted that “we know (Kavanaugh) lied under oath” and “he should be impeached.”

Sen. Amy Klobuchar said on ABC’s This Week that she strongly opposed him, “based on his views on executive power, which will continue to haunt our country, as well as how he behaved, including the allegations that we are hearing more about today.” 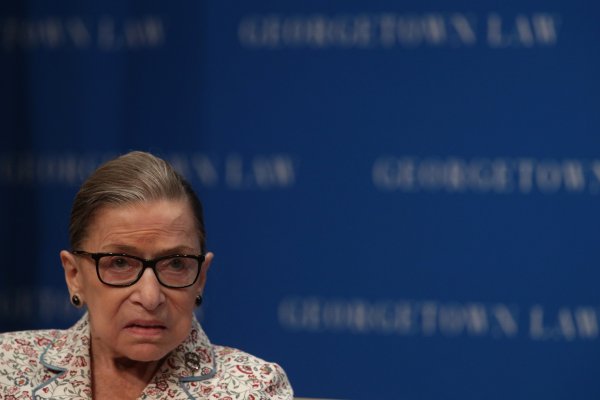 'The Audience Can See That I Am Alive.' At Book Festival, Ruth Bader Ginsburg Says She's Recovering Well After Cancer Surgery
Next Up: Editor's Pick