What Apple Risks By Doing Momentous Events Without Momentous News

Over the past couple of years, Apple has made one thing abundantly clear: It’s trying to transform from a hardware company into a services company, with subscription offerings like Apple Music and Apple News+ intended to make up ground amid industry-wide slowing smartphone sales. So far, it’s succeeding: The company’s revenue from services is growing steadily, growing about 13% in the most recent quarter and hitting $11.46 billion compared to $10.17 billion year-over-year. Apple’s September event doubled down on that trend, with the company revealing new details about two new services: Apple TV+, a Netflix competitor, and Apple Arcade, a subscription plan for mobile games. Both stand to be far more disruptive in their respective industries than the new iPhones Apple introduced during the same event, which are fine upgrades but iterative rather than revolutionary.

Apple’s pivot to services makes sense from a business perspective: offering compelling subscription services can generate “ecosystem lock,” keeping users in the Apple family of devices even if its latest iPhones don’t generate as much hype as they once did. But the move begs another question: If Apple’s turning more into a services company, does it make sense for it to keep holding the kind of whiz-bang events that it’s popularized over the years? Software, after all, rarely generates the same levels of excitement as a new device that people can hold in their hands.

Whether Apple should keep holding multiple large-scale events every year is more than just an insider debate for tech journalists and company megafans. The reliance on spectacle to promote what amount to small-scale updates risks feeling like a company trying too hard to stay top of mind. Furthermore, treating each event like a worldwide phenomenon might lead to disappointment if the announcements don’t lead to shock and awe. Worse yet, lackluster events could encourage consumers to think more critically about what they’re actually getting — maybe, just maybe, they would start comparing the new iPhones’ multi-camera setup, increased processing power, and brighter display to the competition, which has features still missing from the iPhone, like wireless power sharing, in-screen fingerprint readers and 5G connectivity.

Of course, Apple is far from the only company that holds major events to boast about their latest gizmos — Google, Samsung, Microsoft and plenty of others do as well. They, too, are facing the same problem: Broadly speaking, smartphones aren’t getting revolutionary updates every year, or even every other year. “Every category is exciting at first, and then becomes a bunch of incremental changes,” says Ken Segall, Apple’s former advertising director who’s credited with creating the company’s “i” nomenclature — iMac, iPhone, iPad, etc. “How often do we feel compelled to buy a new laptop?” Apple’s only major new hardware in recent memory, the AirPods, are a nice accessory but haven’t yet become truly revolutionary (that may change as they evolve into self-sufficient platforms for AI assistants like Siri.)

Werner Goetz, an analyst with research firm Gartner, says it’s time for the tech world to recalibrate how it thinks about big industry events from Apple and its rivals. “I think we need to divest ourselves of the expectation that each vendor event will bring groundbreaking and disruptive features in hardware,” says Goetz. One exception he points to is Samsung’s Galaxy Fold, a bold new foldable smartphone design. “But these types of hardware-based step changes will become increasingly rare,” he adds. (The Fold has been delayed due to hardware issues).

Another former Apple employee, Guy Kawasaki, says Apple faces a conundrum of its own making, given it was the company that made flashy tech events world-famous. Now, Apple’s fans, investors and the media all expect it to wow the world with a big event at least once a year or so. But the products it’s been promoting lately haven’t been delivering on that expectation the same way the first iMac or iPhone did. “It’s created an impossible act to follow,” says Kawasaki, author and chief evangelist for online graphic design company Canva. (Kawasaki worked with Apple during the creation of the Macintosh, convincing developers to create software for the platform.) He also agrees that we’re in a boring period for smartphones — while Apple’s latest phones have some impressive features and under-the-hood upgrades, it’s unlikely they will change anyone’s life. “For many of these products, we’re in mid-life, whether it’s Samsung or Apple,” he says.

Apple holds big events in part because they’re a great way to kick off a major marketing campaign. But in recent months, it’s showing an increasing willingness to make at least smaller announcements via press release, as it did when it announced new MacBook laptops in July. And there is no shortage of Apple bloggers and streamers whose work helps promote the company’s products. Meanwhile, Olivier Toubia, a professor at Columbia Business School, says Apple’s brand image is strong enough even without big events. “I think part of the perception people have of Apple is driven by the brand’s story, and the way it’s been created and nurtured over the years,” he says. “First with Steve Jobs and now Tim Cook, there’s a powerful story behind the brand, which also, I think, influences how people evaluate the actual product.” Still, when CEO Tim Cook takes the stage, the rest of the technology world comes to a screeching halt, and all eyes are on Cupertino. With power like that, it’s unlikely the company will abandon events any time soon. 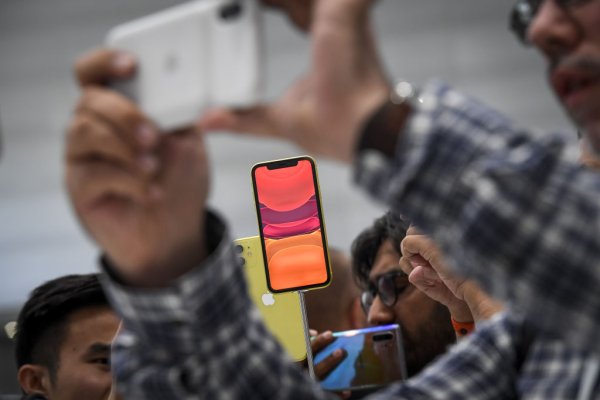 Here's Everything Apple Announced Today, From New iPhones to Its Netflix Competitor
Next Up: Editor's Pick