Shane Gillis, the embattled comedian who was hired by Saturday Night Live as a new cast member last week, will no longer be joining the television show, according to a representative for NBC.

The update came after a video of Gillis began to circulate showing Gillis using a racial slur, mocking Chinese accents and denigrating their community. “After talking with Shane Gillis, we have decided that he will not be joining SNL,” an SNL spokesperson wrote in a statement on behalf of Lorne Michaels.

The statement continued: “We want SNL to have a variety of voices and points of view within the show, and we hired Shane on the strength of his talent as comedian and his impressive audition for SNL. We were not aware of his prior remarks that have surfaced over the past few days. The language he used is offensive, hurtful and unacceptable. We are sorry that we did not see these clips earlier, and that our vetting process was not up to our standard.”

Gillis responded to his removal on Twitter, writing, “I’m a comedian who was funny enough to get SNL. That can’t be taken away.” He added, “I respect the decision they made.”

The video in question is excerpted from a 2018 episode of Gillis’ podcast “Matt and Shane’s Secret Podcast,” Gillis and co-host Matt McCusker take turns complaining about various aspects of Chinatown—from the architecture to the food (“Chinese food is a very dishonest cuisine”) to the way they speak.

“I’m pissed now. I go down there and am like, what are you guys doing?” Gillis said of Chinatown. In a mock Chinese accent, he refers to noodles as “nooders,” calls Chinese people by a racial slur and mocks his waiter’s comprehension skills: “The translation between you and the waiter is such a f-cking hassle.”

Gillis addressed the video in a Tweet on Thursday night, writing, “I’m a comedian who pushes boundaries… I’m happy to apologize to anyone who’s actually offended by anything I’ve said.”

Gillis, who has been a part of the Philadelphia stand-up scene for many years, has a long history of making offensive remarks. Kate Banford, the co-owner of a Philadelphia comedy club, told Vulture that Gillis was banned from the club due to “racist, homophobic and sexist thing he’s said on and offstage.” Another clip from his podcast contains him using a slur against gay people.

In a 2016 interview with the Philadelphia news outlet Billy Penn, Gillis discussed his attempts to get a rise out of his primarily white audience: “You throw stuff out there and you get to see them react to things, like yea or nay, what’s funny and what’s not,” he says, adding: “You can be racist to Asians. That’s what we’re finding out.”

The incident furthers a contentious history surrounding Saturday Night Live and race. In 2014, black cast members Jay Pharoah and Kenan Thompson criticized the show for not being ethnically diverse, leading to the hiring of Sasheer Zamata, the show’s first black woman in seven years. The show has had very scant Asian-American representation across its history: cast members of Asian descent have included Fred Armisen and Rob Schneider (both one quarter Asian), while a longtime production designer, Akira Yoshimura, was called on to play both Star Trek‘s Sulu and Connie Chung due to the lack of options in the cast.

Gillis’ words are the latest example of divisive jokes or remarks made at the expense of Asian Americans in public settings. Chris Rock received blowback for stereotyping Asians at the 2016 Oscars; Jimmy Kimmel had to apologize after a bit on his show contained a suggestion to “kill everyone in China.”

“A lot of Asian-Americans feel like we’re the group where people can make fun of us and there’s no consequences,” the sociologist and author Nancy Wang Yuen told TIME.

And Asian-American food in particular has been a lightning rod for controversy: over the last year various restaurateurs, from Gordon Ramsay to Andrew Zimmern, have been accused of making culturally insensitive remarks about Chinese cuisine, which has long been stereotyped as cheaply made and unsanitary.

Yuen says that comments like Gillis’ have greater stakes beyond the boundaries of comedy. “Slurs are racial trauma for those of us who grew up hearing them—in the playground, on TV,” she said. “And these stereotypes are quite dangerous and are used against populations of color in ways that affect law and policy.”

The original version of this story misstated Sasheer Zamata’s status on Saturday Night Live. Zamata is the show’s first black female cast member in seven years, not the first in the show’s history. 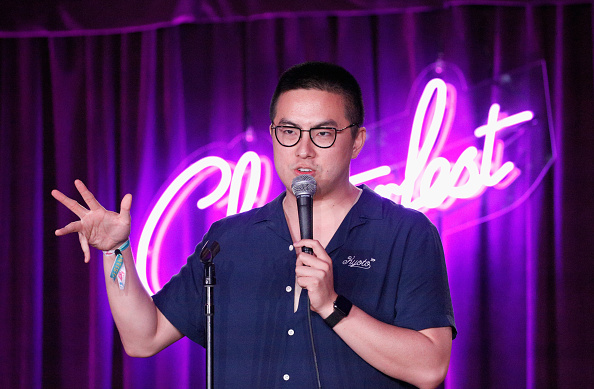 Here's What You Need to Know About Saturday Night Live's Three New Cast Members
Next Up: Editor's Pick