Network TV has seen better days, so it’s no surprise that this fall’s crop of new primetime series from ABC, CBS, NBC, Fox and The CW is light on original concepts. Shows about doctors, lawyers, detectives and quirky, multigenerational families predominate. But even within those formulas, a few creators have managed to make extremely enjoyable programs. Some other offerings, meanwhile, should be avoided even for fans of their respective genres. To help you decide what to watch and what to skip in the weeks ahead, here’s a rundown of the season’s best new network shows, and the pilots to steer clear of.

Just when you thought the networks had exhausted the crime-drama genre, ABC adapts a beloved indie comic built around the compellingly flawed female private investigator Dex Parios, a military intelligence veteran and inveterate gambler in Portland, Ore.—and has the good sense to cast the irresistible Cobie Smulders as the lead. (New Girl fans should also be psyched to see Jake Johnson in an equally perfect role, as the bartender sidekick with a soft spot for Dex.) Stumptown doesn’t sound like anything special on paper. But what sets it apart from so many interchangeable broadcast detective shows is its kinetic pace—the pilot opens with a James-Bond-level action sequence—and the degree of detail you’d expect from a great story that has already been fleshed out in words and pictures.

Bob’s Burgers. Family Guy. American Dad. King of the Hill. Are you seeing a pattern here? Fox’s Sunday-night cartoon lineup has always favored patriarch protagonists—even when its breakout characters (see: Tina Belcher) turn out to be female—and male creators. Enter Emily Spivey, an alum of SNL and Fox’s high-concept apocalypse comedy Last Man on Earth, with an animated sitcom that spotlights three generations of working-class women in the South. “I always wanted to do a King of the Hill–type show, but set in North Carolina with female leads,” Spivey, who has also written for the latter show, explained in a recent interview. With a similarly big heart and a voice cast including Maya Rudolph, Kristen Wiig, Kumail Nanjiani and Ike Barinholtz, the result is familiar and refreshing at once.

From the network that brought you Hot Archie Andrews—and the team behind Gossip Girl and Marvel’s Runaways—comes Angsty Nancy Drew (played by likable newcomer Kennedy McMann), a recent high school grad who’s drowning in grief over her mom’s untimely death. Once college-bound and moonlighting as a P.I., Nancy has ended up stuck in her Maine hometown, waiting tables alongside a ragtag crew of attractive young locals, dating mysterious mechanic Ned “Nick” Nickerson (Tunji Kasim) in secret and endeavoring to steer clear of criminal activity. It finds her, inevitably, when she becomes a suspect in a perhaps-supernatural murder. There’s nothing life-changing about the show, but it combines the most appealing elements of the increasingly off-the-rails Riverdale—an updated cultural archetype, retro production design, fast-paced storytelling and even a ’90s teen-idol dad (Party of Five‘s Scott Wolf)—in a way that’s pretty satisfying.

Stalwart CBS creator Chuck Lorre adopted the trappings of prestige TV for his Netflix series The Kominsky Method, and was rewarded with a handful of big awards nominations. But he’s back to lowest-common-denominator comedy with Bob Hearts Abishola, which finds a Midwestern sock manufacturer (Mike & Molly star Billy Gardell) courting the Nigerian nurse (Folake Olowofoyeku) who helps him recover after he (literally) farts his way through a heart attack. Ostensibly, the show is an attempt to bridge cultural differences at a time when you don’t see many guys like Bob rolling out the red carpet for people like Abishola and her family. In practice, however—and despite the participation of Nigerian-British co-creator Gina Yashere—it exoticizes its female lead and cracks easy jokes grounded in stereotypes.

As network audiences grow older, network shows get more brazen about mocking young people. This year’s most shameless exercise in millennial mocking is Carol’s Second Act, a comedy that casts Patricia Heaton as a 50-year-old mom and former teacher who’s fulfilling her lifelong dream of practicing medicine. But first, she has to survive a stint as the oldest resident in her cohort. And what do you know? She turns out to be more competent and compassionate than any of her central-casting peers: a cocky bro, an anxious overachiever and—the pièce de résistance—a “he/him” social justice warrior who has secretly benefited from nepotism. The show isn’t wrong to insist on the value of life experience. Unfortunately, the writing is terrible. One-liners like “Turns out Caleb’s not a woke bae” are only legible as jokes once the laugh track kicks in. It’s all especially disappointing coming from co-creator Sarah Haskins and Emily Halpern, the team behind ABC’s underrated one-season wonder Trophy Wife. Even the always-welcome presence of Kyle MacLachlan, as Heaton’s love interest, can’t save this mess.

Once a highlight of The West Wing, Bradley Whitford has been ubiquitous on TV and film lately. He was the Obama-loving bodysnatcher dad in Get Out; prickly, conflicted Commander Lawrence on The Handmaid’s Tale (for which he recently won an Emmy); a hard-drinking scientist in the latest Godzilla movie. But this fall, he’s taking his cantankerous-intellectual persona to NBC’s Thursday comedy lineup. In Perfect Harmony, Whitford’s former Princeton music professor is grieving both his wife and a career he lost to student complaints. When we meet him, he’s on the verge of suicide. (Hilarious way to open a sitcom pilot, right?) Thankfully, there’s a terrible church choir right around the corner who could use his help preparing for an upcoming competition. It’s a silly premise, the characters look to be pretty flat and a climactic mashup of Handel’s “Hallelujah” chorus and “Eye of the Tiger” nearly made this woman lose her will to survive. Worst of all is the shamelessness of the Pitch Perfect mimicry, from the show’s title to the casting of Anna Camp—whose perky character seems destined for an opposites-attract romance with Whitford’s grump. 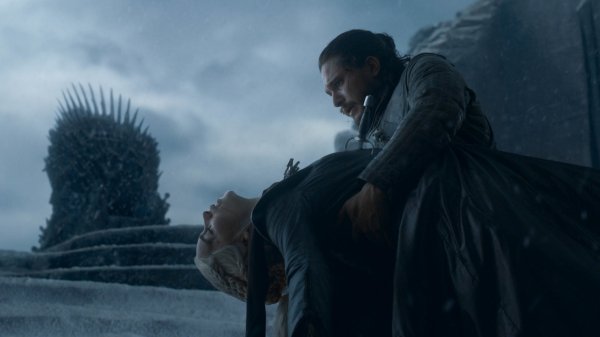 Game of Thrones Composer Ramin Djawadi Breaks Down the Hidden Meanings in the Music That Played Over Daenerys' Death
Next Up: Editor's Pick