'A Permanent Limbo State.' Migrants in Mexico Are Running Out of Options After Supreme Court Asylum Decision

One Ugandan woman has waited three months at a migrant shelter in Ciudad Juaréz, across the border from El Paso, Texas, for her number to be called by the U.S. government so that she can make a claim for asylum. She was close to being next in line, according to an advocacy group that works with her. But her chance for a life in the U.S. is now uncertain after the Supreme Court on Wednesday night allowed the Trump Administration to enforce a July rule blocking most migrants waiting in Mexico from seeking asylum in the U.S.

Now thousands of migrants at the southern border are stuck in a state of limbo, and advocates and attorneys are unsure what steps to take next. Many migrants are housed in shelters along the border. Others sleep in tents or outside, vulnerable to exploitation, kidnapping, rape and beatings in Mexican cities with a history of drug and cartel violence.

“Each person, each family, is going to have to decide for themselves how hard they’re willing to fight for asylum, how long they’re able to fight, what resources they can muster. It’s a guessing game right now,” says Traci Feit Love, executive director of Lawyers for Good Government, which organizes groups of volunteer attorneys to travel to Matamoros, Tamaulipas, across the border from Brownsville, Texas, to provide legal guidance to migrants.

The woman from Uganda, whose name was not disclosed to TIME by the Hope Border Institute to maintain her privacy, is one of thousands of migrants from around the world, mostly from Central America, currently at the border with Mexico who may no longer qualify for asylum under a new Department of Homeland security (DHS) rule. The July policy change requires migrants to first seek asylum at another country that they pass through en route to the U.S., known as a “safe third country” policy, and only allows for some exceptions. The new rule has faced back-and-forth legal challenges, including a Monday decision by Judge Jon Tigar in San Francisco to block the policy nation-wide. The Supreme Court then decided on Wednesday that the policy can be enforced while it undergoes further legal challenges, including a lawsuit by the ACLU, the Southern Poverty Law Center and the Center for Constitutional Rights that was filed on July 16.

DHS announced the new rule in July, saying the Immigration and Nationality Act gives the agency authority to restrict asylum eligibility. U.S. Citizen and Immigration Services director Ken Cuccinelli applauded the Supreme Court decision in a public statement Wednesday. “For far too long, the loopholes in our nation’s asylum system have been exploited by drug cartels, human traffickers and other organized crime factions in order to shuttle those seeking economic opportunities and family reunification through our southern border,” he wrote. “This kind of abuse creates illicit cash flows to violent criminals, frustrates the efforts of legitimate asylum seekers and undermines the integrity of our immigration system.”

But the decision was “devastating” to attorneys and advocates who work with migrants.

“It’s a sense of disbelief and devastation when the highest court in the land allows this to proceed,” says Marisa Limón, deputy director of the Hope Border Institute, a Catholic organization that works with migrants who are waiting in Juaréz to make an asylum claim in the U.S. “It’s sobering because you’d like to think that at some point in our judicial process folks will be able to connect the dots and understand what implications this has for people.”

“It is a permanent limbo state,” she adds.

What happens next for migrants?

It’s unclear what happens next for migrants, but Limón and Love say it will depend on each person’s case. Some may still try to make a claim in the U.S. should they meet exceptions to the safe third country rule — such as being a victim of human trafficking — and others might try to apply for asylum in Mexico or attempt to secure a work permit there. Others might return home.

Thousands of people have waited in Mexico under the Trump Administration’s Migrant Protection Protocols (MPP) rule, otherwise known as “Remain in Mexico,” which allows DHS to send migrants back to Mexico while they await their court hearings. More than 26,000 people have waited under MPP as of July 2019, according to TRAC Immigration data by Syracuse University. It is unclear whether migrants who already have a court date scheduled and who didn’t first claim asylum at a different country before arriving at the border will also no longer qualify for asylum.

Many others, including the woman from Uganda, are in the so-called “metering” program, waiting with a number to make an initial claim for asylum.

“She was very hopeful because her number on the list is about 12,600 and I believe [government officials] are at 12,400,” Limón says. “She was thinking, ‘I’m getting closer,’ you know. So what does this mean for her, who has waited for three months already?”

Love says even before the Supreme Court decision, it was difficult to deliver “bad news” about asylum policy in the U.S. “They’re still looking for hope,” she says. “But every time they have a glimmer of hope and they ask a question and the answer is ‘no, that’s not possible,’ ‘this isn’t possible,’ ‘this is unlikely to work,’ your heart breaks. But all you can do is answer the questions.”

Still, Edith Tapia, policy research analyst at Hope Border Institute, says she’s hopeful that the policy will eventually come to an end as it continues to face legal challenges.

“I hope this is not the final word,” she says. “For [migrants] to be told that after all this time they’ll not even have a chance to claim asylum — I think that’s just terribly demoralizing and cruel.”

Conditions for migrants at the border

The thousands of people waiting to enter the U.S. are now learning the time they’ve waited may not result in the outcome they wanted — and attorneys and advocates are breaking the news.

“It’s really hard to tell that to their face as they’re looking at you as their one lifeline of information,” says Edith Tapia, who works with Hope Border and spent part of Thursday in Juaréz speaking with migrants. “All they want to do is get to a place where they feel safe.”

The people of Juaréz have seen a recent uptick in violence as homicide rates have increased. More than 700 people have been murdered in Juaréz as of June 2019, according to The El Paso Times. Just over a decade ago, Juaréz was considered the most dangerous city in the world. Migrants stranded there have described being kidnapped, raped, beaten and extorted.

“You’re introducing a vulnerable population into a delicate ecosystem and it makes it a perfect breeding ground for people to be preyed upon,” Limón says.

In Matamoros, many migrants depend on items provided by volunteers. Food, toiletries, diapers and condoms for women who fear being raped. “The quality of life there is very poor and the risks are very high,” Love says. She adds that she’s spoken with migrants who have been kidnapped in Matamoros since their arrival.

“I spoke with a family who was concerned about their 7-year-old daughter because she had already been raped in their home country, which is why they fled, and the fear was, what if it happens again?” Love says. “I don’t think any of us can really understand, even those of us who have been there and spoken with them — it’s different when you’re the one in that situation. To feel helpless to protect your children.” 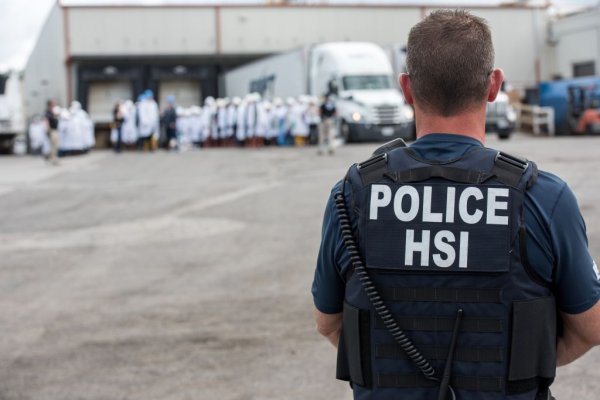 ICE Opened Fire During an Apprehension Near Nashville
Next Up: Editor's Pick