What to Know About the Origins of 'Left' and 'Right' in Politics, From the French Revolution to the 2020 Presidential Race

On Thursday night, when 10 Democratic presidential primary candidates grace a Houston stage to debate the future of their party, they’ll all be hoping to differentiate themselves from their competitors. After all, while they all want to represent the same political party, their views fall at different points on the political spectrum. Some candidates, like former Vice President Joe Biden, represent the more moderate wing of the party. Others, like Vermont Sen. Bernie Sanders, represent a more radical vision of progressive politics — what’s usually called the left wing.

But why do left and right signal different ends of a political spectrum?

The terms are metaphors today, but they began as “literal descriptions,” says Sophia Rosenfeld, a professor of European and American intellectual and cultural history at the University of Pennsylvania. Here’s how historians explain the terms’ surprising evolutions.

What are the origins of the political terms ‘left’ and ‘right’?

The story begins in France, in the summer of 1789, explains Patrice Higonnet, a professor emeritus of French history at Harvard University. As the French Revolution gained steam, an angry mob had just stormed the Bastille. The National Assembly assembled to act as the revolution’s government. And the assembly had a principal goal: writing a new constitution.

Lithograph of the the storming of the Bastille in on July 14, 1789.
adoc-photos/Corbis via Getty Images

One of the main issues the assembly debated was how much power the king should have, says David A. Bell, a professor of early modern France at Princeton University. Would he have the right to an absolute veto? As the debate continued, those who thought the king should have an absolute veto sat on the right of the president of the assembly, and those who thought he should not — the more radical view — sat on the left of the president of the assembly. In other words, those who wanted to hew closer to tradition were on the right, and those who wanted more change were on the left.

“So these groupings became known as the left and the right, and that’s where we trace the origins,” Bell tells TIME.

The seating pattern repeated itself in subsequent legislatures and parliaments. “It entered popular vernacular quite quickly,” he says. “These terms were used in the newspapers reporting on the national assembly.”

How did ‘left-wing’ and ‘right-wing’ spread?

The whole world was watching the French Revolution, and its jargon eventually began to make its way around the world — but not overnight. According to French historian Marcel Gauchet’s essay “Right and Left,” the process of right and left becoming primary categories of political identity was “a long drawn-out process that lasted more than three quarters of a century, until the first decade of the 20th century.”

The prevalence of left and right in Bolshevik Russia and in the early years of the Soviet Union exemplifies the terms’ reach.

“The Bolsheviks were fascinated by the French Revolution. They were intensely conscious about carrying out its legacy — and raising it to a higher level,” Marci Shore, a professor of European cultural and intellectual history at Yale University, told TIME in an email. They viewed it as a necessary step in the historical process that would eventually lead to communism.

For them, left and right took on newly specific meanings. People who broke from the Communist party line were described by opponents as left-wing or right-wing deviationists, especially during the Stalinist era. Leaning toward the left generally meant embracing a radical international workers revolution, and leaning to the right generally meant adopting some sort of national sentiment. But the definitions were fluid, always shifting in relation to the ever-changing party line.

In the interwar years, the terms left and right were used all over Europe as people wrestled with the politics of nation and class. “It’s very difficult to talk about the 1920s and 1930s in Europe without continually invoking ‘Right’ and ‘Left,'” writes Shore. “This is especially true because the interwar years were a time of a polarizing political spectrum: the Right became more radical, the Left became more radical; the liberal center ‘melted into air’ (to use Marx’s phrase).”

How did ‘left’ and ‘right’ enter American politics?

According to Michael Kazin, a professor of U.S. politics and social movements at Georgetown University, the terms only took hold in American vernacular in the 20th century — and a Google NGram search reveals that the terms left-wing and right-wing only began to be widely used in English-language books in the 1920s.

But, just as the terms were becoming more common, those who might have used them most started to shy away from them. There were “bona fide” communists and socialists active in the U.S. in the 1920s and ’30s, says Brent Cebul, a professor of 20th century U.S. history at the University of Pennsylvania, but they became less likely to call themselves “leftists” for multiple reasons.

First, when President Franklin D. Roosevelt established the New Deal in the 1930s, he ushered in an era of liberalism that made peace with private enterprise. Many people who had been active socialists chose to support the New Deal, sacrificing their more radical ideologies in the name of making progress in mainstream parties and politics.

Then, in the 1940s and ’50s, the Cold War and the Red Scare raised the stakes for those on the left. “You would lose your job in government if you actively spoke of socialist or communist leanings,” Cebul says. “So that has a major implication in terms of who actually self-identifies as leftist.” Meanwhile, conservatives thinkers began linking the growth of the liberal state to what they called leftism, with its communist associations. “So really, it’s the right that keeps this idea of the left alive [in mainstream politics],” he argues.

However, people began reclaiming the term around the 1960s, says Jennifer Burns, a professor of 20th century U.S. history at Stanford University and a research fellow at the Hoover Institution.

What caused the shift? First, political parties — in the past often been driven by region and economic interests — began to solidify around central ideological beliefs. Secondly, people on both the right and the left began to reject the old political consensus. Conservatives worked to advocate a new set of ideas, disagreeing with the philosophical underpinnings of expanded government. And on the other side, student activists protested against what they viewed as “hegemonic liberalism,” as Burns puts it, and the Vietnam War.

This moment was key: left and right became newly useful in American politics when people needed a way to express their disagreement with others on what might have seemed to be their own side of things.

“Suddenly, you have more of a defined left and right, because both sides think the middle — the establishment, the powers that be — are messing things up and not doing a good job,” Burns says. “That may be a reason that left becomes more defined as a spot on the political spectrum, because people who disagree with liberalism that aren’t conservatives need a word, so they can call themselves leftist… [And] when people are scrambling to differentiate themselves from the conservative movement of their day, yet they feel clear that they aren’t calling for an expanded government or expanded intervention in economic or social and political life, they fall back on this term of the right.”

What do ‘left’ and ‘right’ mean today?

In the U.S. today, left and right suggest progressivism and conservatism. But the definition of the center is still ever-changing. On Tuesday, McClatchy reported that while Biden has been labeled a moderate candidate, his agenda is far more progressive than Sec. Hillary Clinton’s was just four years earlier.

One trend does tend to hold true: left and right become stronger political alignments when the center falls away. Some argue that’s exactly what’s happening in 2019.

“I think that the term right is coming back into usage today,” Burns says, “because we’re seeing so much diversity among people who are really clear that they’re not liberal.”

The terms are also increasingly used in political combat, says Kazin. Politicians today often describe their opponents as being on the far left or the far right in an effort to de-legitimize their politics.

And the meanings of left and right can still change once again.

“I’m a historian; I don’t believe terms have any uncontested meanings,” Kazin says. “The more important the term, the more contested the meaning is.”

The original version of this story misstated that Marcel Gauchet was a “late historian.” He is still alive. 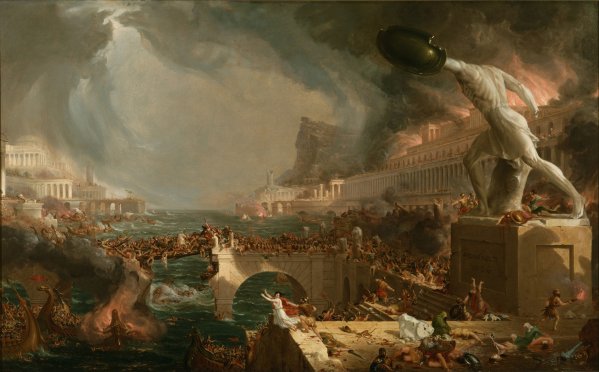 How the Long History of Human Violence Explains Why the Internet Causes So Much Chaos
Next Up: Editor's Pick