A Fast-Moving Wildfire Has Burned 2,000 Acres in Southern California. What to Know About the Tenaja Fire

According to the Riverside Fire Department, around 800 personnel are currently working on putting out the Tenaja wildfire, which blazed through 1,400 acres in less than a day. The fire is named after the road near where it started around 4 p.m. Wednesday in La Cresta, Calif.

The Murietta Valley School District announced it would be closed Thursday and Riverside public health officials put out a health warning urging residents in affected areas to limit outdoor activity due to the smoke and ash.

“Ash and smoke can be hard on anyone to breathe, but especially those with lung disease,” Dr. Cameron Kaiser, a Riverside County public health official said in a statement. “Everyone worries about the flames, but smoke can impact you even if you’re miles away from the fire.”

Here is what we know about the Tenaja fire in Southern California.

How much has burned

As of Thursday evening, the blaze had churned through 1,974 acres and was just 10% contained, according to the California Department of Forestry and Fire Protection. Firefighters faced gusting winds up to 30 mph and hot conditions that could further dry out the surrounding, dense scrubland.

About 415 homes and 1,200 residents have been evacuated since Wednesday, Hagemann says.

How did the fire start

According to CAL Fire, the Tenaja fire started at 4:43 p.m. on Wednesday at the intersection of Tenaja Road and Clinton Keith Road in La Cresta.

According to the Riverside County Fire Department, the rapidly spreading fire had only burned through 25 acres when it was initially reported and within a few hours, had spread to 994 acres.

CAL Fire said the fire is moving at a “dangerous rate of speed.”

As of Thursday, fire officials have not determined what caused the fire.

What areas are being evacuated

On Wednesday, the Riverside County Fire Department issued a mandatory evacuation order to residents along the Trial Circle and in La Cresta as well as the Santa Rosa Plateau Visitor Center.

As of Thursday, the fire department expanded the order to residents in Copper Canyon south of Calle del Oso Oro between Clinton Keith Road and Murrieta Creek Drive as firefighters work on containing the flames.

The fire department has set up an evacuation center at Murrieta Mesa High School, located at 24801 Monroe Ave.

The County of Riverside Emergency Management Department has posted an evacuation map for residents to check if they are within a mandatory or voluntary evacuation area. 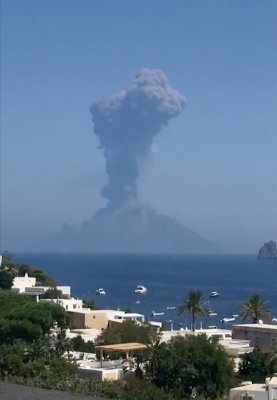 The Eruption of Italy's Stromboli Volcano Resulted in Some Harrowing Images From Nearby Tourists
Next Up: Editor's Pick