President Donald Trump seemed to double down yesterday on his false comments that Alabama was in the path of Hurricane Dorian.

Following these comments, Trump displayed the National Hurricane Center’s original weather forecast chart for the devastating storm with what appeared to be a small addition to the hurricane’s potential cone of impact drawn on in Sharpie. After the internet had its fun with the official doodle, and the National Weather Service corrected the president, tweeting that Alabama “will NOT see any impacts” from the storm, the late night talk show hosts got in a few good jabs of their own.

On The Late Show, Stephen Colbert managed to get two days’ worth of material out of the president’s response to Hurricane Dorian, mentioning it both Tuesday and Wednesday night. He even came up with a tagline for this Sharpie-driven news.

“Because of the fact that the president misrepresented where the water would go, I’m calling this scandal ‘Water-gate.’ Trademark,” he joked. Colbert wasn’t satisfied with just a new trademark, though, and took things further.

On Jimmy Kimmel Live!, Jimmy Kimmel thinks Trump is testing boundaries. “He’s not even trying to hide the lies anymore,” Kimmel said. “Not only do we have fake news, we now have fake weather, too. I’m hoping we get fake sports, because I want to see the Mets win the World Series.” Kimmel also suggested that Trump thinks “we’re a bunch of idiots,” surmising that the president thought to himself, “‘Hey, they elected me president — let’s see what other dumb crap they’ll go for.’”

On Late Night, Seth Meyers found Trump’s Sharpie-strewn hurricane map so convincing that it had him re-thinking some of Trump’s prior claims. “I mean, after this, I have to wonder if his high school report card was legit,” he joked.

For his part, Daily Show host Trevor Noah was amazed with Trump’s display, but perhaps not in a way that the president would appreciate. “Did he draw with a Sharpie?” Noah asked, laughing. “I mean, don’t get me wrong — I’m impressed that Trump can locate Alabama on a map,” Noah said. “But still, the president of the United States just changed the map with a Sharpie to make himself look right and he thought we wouldn’t notice.” Noah added that Trump was either trying to prove himself right “or he wanted to give the hurricane bigger boobs.”

See some of the Trump sharpie that kept rolling in below. 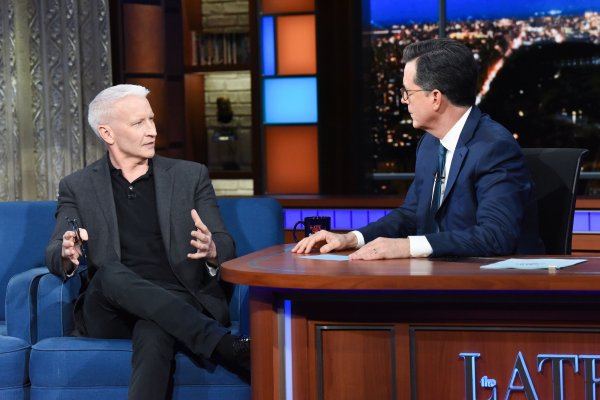 Stephen Colbert and Anderson Cooper Share a Touching Moment About Grief Together
Next Up: Editor's Pick