After sticking by false comments that Alabama was in the path of Hurricane Dorian, President Trump displayed the National Hurricane Center’s original weather forecast chart for the storm on Wednesday. And an apparent Sharpie edit caught the attention of the internet.

A closer look at the chart Trump displayed, while discussing the impact and response to Dorian, appears that the original forecast cone that mapped the predicted direction of Dorian on Aug. 29 was altered in black ink to touch a corner of — you guessed it — Alabama.

“It was going towards the Gulf, that was what was originally projected,” Trump told reporters from the Oval Office on Wednesday, displaying a chart from the National Oceanic and Atmospheric Administration (NOAA). “It took a right turn, and ultimately — hopefully we’re going to be lucky, it depends on what happens with South Carolina, North Carolina.”

The public immediately took notice, with some weather experts even tweeting at the President to remind him that it is illegal to falsify weather reports.

“I know that Alabama was in the original forecast, they thought they would get it as a piece of it,” Trump said. “Actually we have a better map than that which is gonna be presented where we had many lines going directly — many models, each line being a model, and they were going directly through, and in all cases Alabama was hit, if not lightly, in some places pretty hard.”

The NOAA has repeatedly stated that Alabama would not be impacted by Dorian.

Trump later tweeted a chart to double-down on his claims about Alabama. The chart, published by the South Florida Water Management District, includes a clause at the bottom stating “NHC Advisories and County Emergency Management Statements supersede this product. This graphic should complement, not replace, NHC discussions. If anything on this graphic causes confusion, ignore the entire product.” 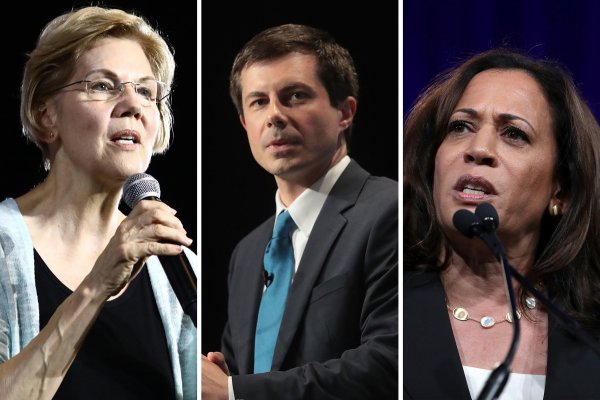 'They Clearly Need to Step Up.' Why Advocates Think 2020 Democrats Should Talk More About Judges
Next Up: Editor's Pick